Ten Food-Prep Gadgets from the ’80s 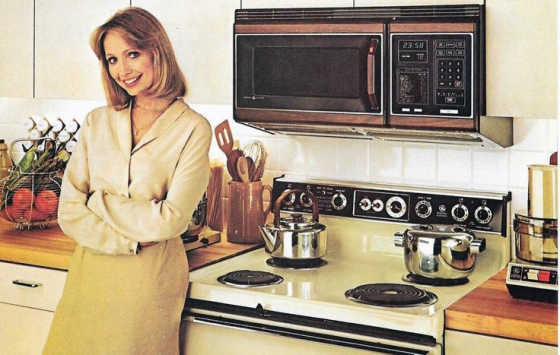 Besides being a Decade of Decadence, the ’80s was also a decade of innovation and firsts. Automobiles were finally acquiring all-important design and mechanical upgrades that would make advancements for the future. Electronics were climbing out of the boring ’70s and the new wave of home video games, music, and television was making huge strides towards greater things. And then there’s food prep. Let’s check out how these ten items made eating a little more amazing back in the eighties. 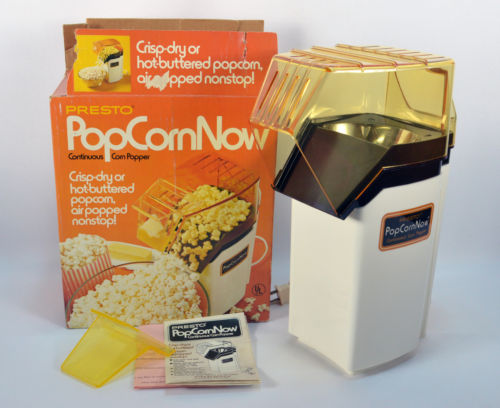 Movie night with your brand new VHS or Betamax just wouldn’t have been complete without some fresh, hot popcorn, right? What, are you gonna sit and watch your 90 dollar copy of Raiders of the Lost Ark without the full theater experience? Well, since microwavable popcorn was still in test-market phase, you needed the Presto Popcorn Now air popper! Yummy! And dry! 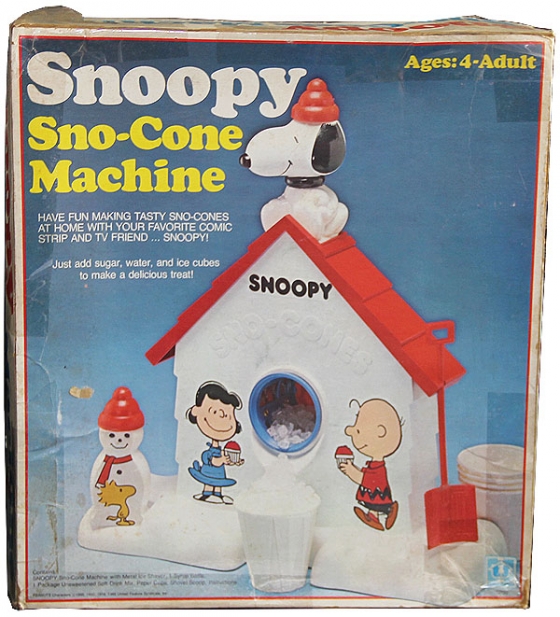 So, let’s say you have a bunch of perfectly good ice cubes sitting around taking up space. Normally they’d all end up in your mom’s daily rations of Highballs, but why not slow her inevitable alcoholism by using a few of those ice cubes in your new and exciting Snoopy Sno-Cone Machine! All you need to do is toss a few in the shredder wheel and turn, turn, turn until all you see is snow-white powder! Add your favorite flavors, or enjoy plain! Fun! Sure, it was invented at the tail end of 1979, but let’s face it: it owned the 80’s! 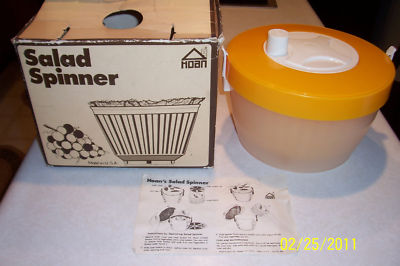 Though Salad Spinners have been around since the 1970’s, they really came into their own in the 80’s when Infomercials ran the airwaves after midnight. It seems that Cable TV, still in its infancy, didn’t have enough programming to fill time in the wee hours of the night, so they ran commercials featuring products they felt we all needed. The Salad Spinner was one of them. And now, we can all have dry lettuce. Thank goodness. 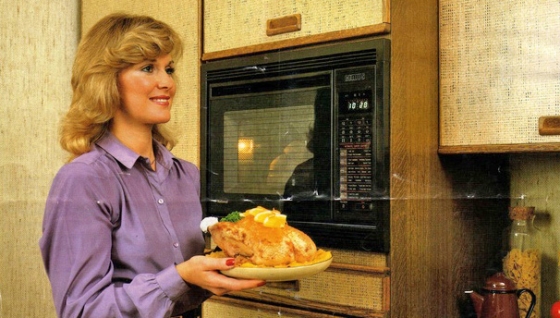 When it comes to ubiquitous kitchen gadgetry, the common microwave is something we take for granted every day. For most of us, it seems like we’ve just always had one; like it’s just some boxy member of the family with a glowing clock for a face. Sure, the countertop microwave has been around since the 60’s, but it hadn’t really found its niche (like in roughly 25% of American households) until 1986. And that says 80’s to me. Microwaves have come a long way, but nothing screams nostalgia like the loud monsters of yesteryear. 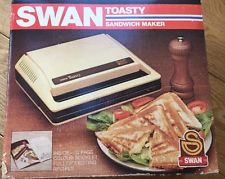 The desire to have one’s sandwich toasted with the option to easily and quickly separate the crust has been around for nearly as long as there’s been sliced bread. The Pie Iron came into being in the 30’s when people toasted most of their sandwiches over a campfire for fear they’d get eaten by saber-toothed tigers. The people I mean, not the sandwiches. Anyway, in the 80’s the electric kind was called a Tonka Toaster, because AMERICA! And many families had one of these running enough power to brown out half the house. 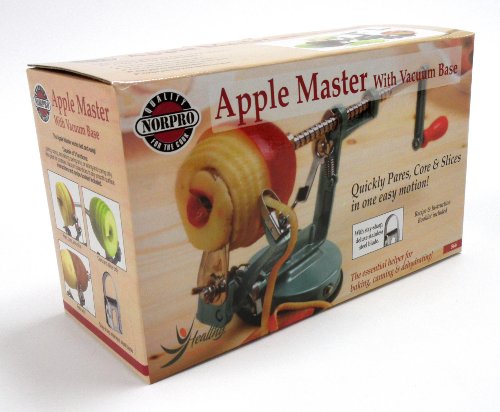 Look, we know how much of a colossal pain in the ass it is to peel an apple. I mean, the thing is cube-shaped, so it has all those corners, it’s covered with spikes and it spits fire and… oh, wait, that’s not an apple. Apples are spherical and are actually really easy to peel so… what’s up with the hand-cranked apple peeler? We have no idea. Apparently, it works with potatoes, too. So that’s something. Either way, this thing had an infomercial as well and a lot of people owned one. 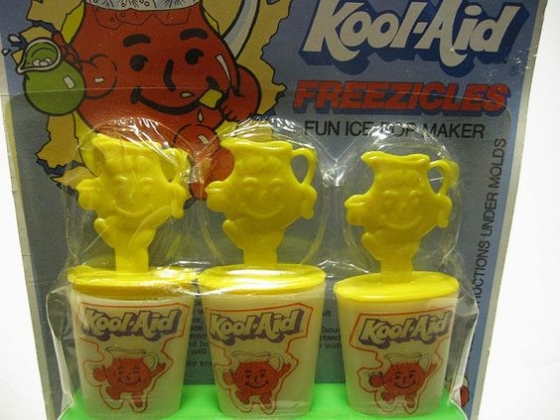 When we were kids in the 80’s, mom didn’t always have extra money hanging around with which to run to the Ice Cream Man and trade for some pricey frozen concoction. Sometimes we had to make our own. Granted, this wasn’t necessarily the cool kids’ way to have something chilly on a hot day, but it was still kind of fun jamming toothpicks into the ice tray full of orange juice or Kool-Aid. If you were really lucky, mom had some molds specifically made for creating actual. decent-looking freezer pops. Some of us weren’t that lucky. 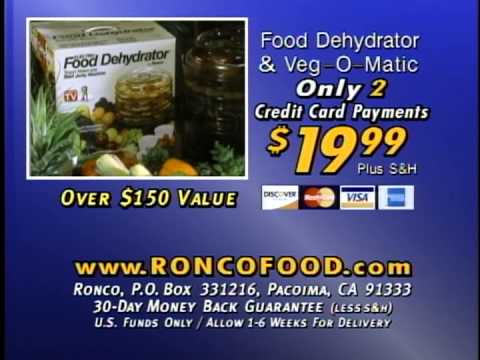 Sitting up late at night, staring at the TV with a vapid look wondering what to do with your life, you run across Ron Popeil and his magical Food Dehydrator. This thing could make anything dry. Do you want jerky? Bam! Dried meat. Do you want fruit leather? Wham! Dried fruit! This thing was nothing short of a miracle, and we all wanted one. Once again, it was invented in the 70’s, but it really hit its stride and hit every infomercial ever in the mid-to-late 80’s. If you wanted to zombify your food, this was the way to go.

Okay, this might be a stretch calling these things ‘gadgets’, but we’ll be damned if they didn’t help us hold our corn on the cob so we didn’t get hot butter all over our tender, childish fingers. According to Wikipedia, these things have been around forever, but we distinctly remember them largely being just about everywhere in the 80’s. You can find them now, but we’re far too macho to use them. 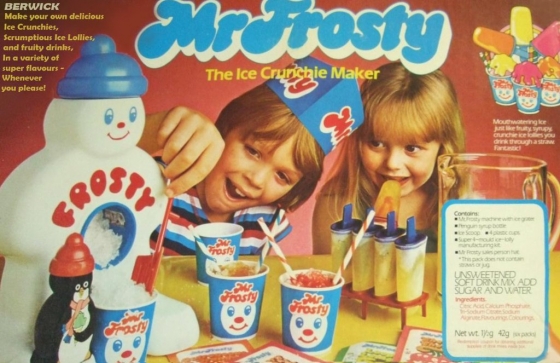 Many thanks to Playskool for keeping the Slush Maker alive and well with their classic Mr. Frosty snowman! Much like the Snoopy thing from back at the beginning, all you had to do was chuck in a few cubes of ice and turn the handle. Out came the crushed ice (not quite as fine as a snowcone) and on went the delicious, heavy syrups. Yay sugar!