‘Tis the season to take pleasure in the joys of autumn’s wickedest holiday, Halloween. Gorging on teeth-rotting candy and watching as many scary movies as possible are rites of passage for every man, woman and child. For purposes of this exercise, I’ll turn an eye to the big screen. There are hundreds of excellent American flicks available for diehard horror fans, but for those searching for a respite from Jason Voorhees and Michael Myers, there are a bevy of foreign films guaranteed to deliver spooks and scares. Here are ten recent ones that fit the description.

A team-building weekend getaway to a remote lodge in the woods turns deadly (and funny) for a defense contractor sales team. There’s loads of blood and some very creative kills, one of which unfortunately gained notoriety in 2009 for being copied in the real-life murder of a 17-year-old.

When Eve invites four strangers to her home in the French countryside on Christmas Eve, the plan is to party. However, good times soon turn horrifying after Eve’s Satan-worshipping handyman (Vincent Cassel) makes his true intentions known. In a word: disturbing.

A teenage boy severely allergic to sunlight relocates with his mother to a secluded village in the mountains of Spain. When grisly murders begin occurring in the woods behind the boy’s house, he becomes the leading suspect. But something lurks in the dark that may or may not be human.

Weekend farmers and village residents fall under attack from a giant man-eating boar roaming the Korean countryside. It follows the Jaws blueprint, including the rhyming title, and also manages to eek out a few laughs along the way. On the downside, it’s about thirty minutes too long.

A couple living on a remote Romanian estate are awakened by strange noises outside. What ensues is a terrifying descent into Hell as a group of hooded assailants converge on the house with murderous intent. Watch this one late at night with the lights off, if you dare.

The big bad money-hungry fertilizer plant has been pumping hazardous runoff into the local wetlands. The lasting effects on the flora and fauna is devastating. Can you say mutant boars? It’s man vs. beast and man vs. man in this environmentally conscious creature feature.

Set during the Vietnam War, a derelict SOS signal sends a South Korean squad into the mysterious R-Point region to locate a platoon of soldiers presumed dead. It’s an interesting spin on the Ten Little Indians story, filled with creepy imagery and supernatural scares.

A sailing excursion turns deadly when the yacht carrying five passengers capsizes in the middle of shark-infested waters. Four of the five decide to swim to safety only to find themselves pursued by a vicious Great White. Of all the blatant Jaws ripoffs, this one stands out. Excellent underwater cinematography. 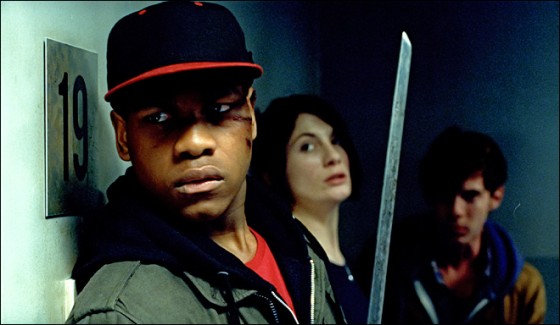 Finally, an alien invasion flick worth watching. When gorilla-like beasts from beyond the stars descend on a South London neighborhood, it’s up a streetwise gang of teens to defend their turf. Impressive special effects and quality performances highlight one of 2011’s best films.

No Halloween movie marathon would be complete without a good ol’ fashioned zombie apocalypse. This one forces cops and criminals trapped inside a high-rise slum to join forces against an army of rabid undead. The blood, bullets and gore is off the charts, as it should be.