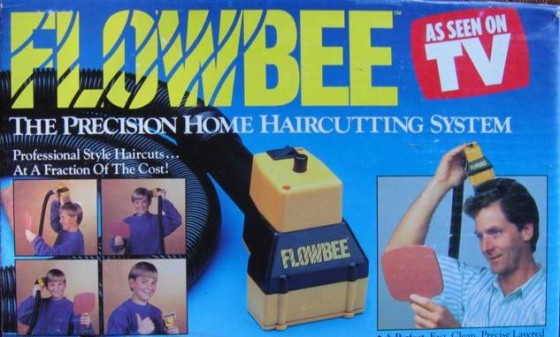 Most technological advancements and gadgets are conceived and constructed to better our lives in some way. Cars, planes, computers and thousands of other inventions make what we do on a daily basis much, much easier. That being said, there are certain devices that exist for no other reason than to make an increasingly apathetic populace even more passive. Do we really need these ridiculous contraptions? No. But that won’t stop the laziest of the lazy from breaking out their credit cards and ordering one to their doorstep. Here are ten such gizmos that fit the bill.

This just doesn’t make any plausible sense. Rather than take the thirty seconds needed to wipe yourself dry after a shower or dip in the ocean, you slip into an over-sized towel? Not helping matters is the fact that the damn thing looks hideous. It’s worse than a Snuggie.

It’s beyond grueling to get out a knife and cutting board to chop your veggies. Who has the time? Just stuff your food into a plastic piece of junk and shoot them all over your significant other’s plate. It makes for hours and hours of fun. Anyone who owns one of these should be slapped with a shovel.

Just get off your ass and go to the salon or barber, or at the very least, purchase a set of professional hair clippers. Unless you’re in a coma, there is no sane reason to stick a vacuum on your head when the locks get long. Sorry, living in West Virginia is not a reasonable excuse.

Because reaching into your pocket, purse or handbag might cause you to miss that crucial text from the person you’re banging on the side. Slide the rubber Phubby on your wrist and you’ll be in the loop all the time. Even as you lay dead inside your mangled Honda Accord after ramming it into a bridge abutment because you were staring at your Phubby.

Holding a cold brew and lifting it to your mouth is quite an ordeal. Do it twenty or thirty times in one sitting and you’re liable to pass out from exhaustion. Better to look like a complete moron and suck the refreshing beverage from a tube as if you were a quadriplegic, even though all your limbs are functioning.

Why waste cash on brooms and dust pans when you can climb into your super-scrubbing slippers? Of course this would require a person to actually move around the house to get the job done. Odds are if you’re wearing slippers, there ain’t a lot of work going on, unless you count drinking from your beer helmet while camped in front of the TV.

The ingenious design of this machine is not enough to offset the fact that it promotes being a sofa slug. If you can’t walk fifteen feet to the refrigerator for a refill, then it’s probably time to eat a bullet and kiss the cruel, cruel world goodbye.

Because you’re so damn important and all your phone calls are a matter of life and death. If you attach a Bluetooth Headset to your ear there needs to be a constitutional law that allows others the right to rip it from your lobe and smash it with a hammer without fear of repercussion.

Perfect for the fat piece of useless flesh and bone in all of us. Effective exercise normally involves body parts in motion. Unfortunately, that might cause unwanted perspiration and accelerated breathing, which really sucks. The Hawaii Chair is just like riding your favorite amusement park attraction. May a horrific limb-severing accident befall those who own one of these.

Was there any doubt? The seconds it takes to turn off all those pesky household lights turned to milliseconds with the introduction of The Clapper. Just don’t hold any sort of recital at your abode or it will look like poltergeists have invaded. Are there still shiftless cornballs out there using The Clapper?