Sports > Golf > Ten Golf Hazards to Look Out For 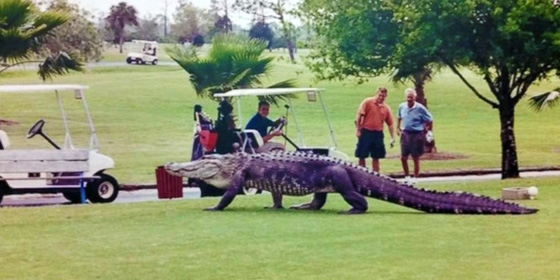 Nearly every year, a huge alligator going for a stroll on a Florida golf course goes viral across the internet. If you haven’t yet seen it, here is a video of the massive beast below :

This video isn’t the first time this same Gator has gone viral, it pretty much happens every time he ventures out onto the greens and someone captures a photo or video of him. Admittedly, he does seem to be getting bigger every year though.

If a dinosaur could just roam out onto the fairway in your backswing, it seems like Golf may be more dangerous than most people ever thought. If you ever lose your ball to a Gator, Chubbs Peterson from Happy Gilmore would urge you to just let it go.

If massive gators are in play, here are some other hazards you might look out for during your next round on the golf course… 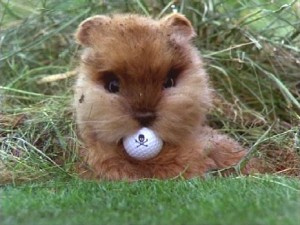 Gophers are vengeful creatures that don’t like it when a golf course invades their marked territory. They are prone to snatching up balls, creating hazards by burrowing throughout the course, and may invite unbalanced groundskeepers to use plastic explosives and destroy large parts of the grounds. None of which will help anyone’s golf game. One known weakness that can be exploited is that gophers are susceptible to Kenny Loggins music, which requires them to break out in dance: 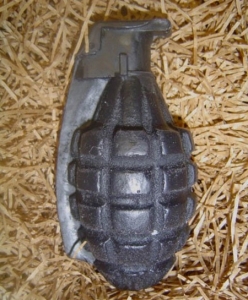 Back in 2009 a hand grenade was found on the Augusta Municipal Golf Course in Georgia. So if sand traps, water hazards, and the rough aren’t enough for you, one has to all look out for possible explosives. Specifically in this case World War I armaments. We imagine an announcer’s call would be something like this:

“The 12th hole is a long Par 4 with a dogwood to the left and a difficult pin placement. Most golfers use an iron off the tee to avoid the fairway bunkers and the grenades on the right. The grenades typically have a kill zone of about five meters, and that’s the area you don’t want to be standing in when it goes off.” 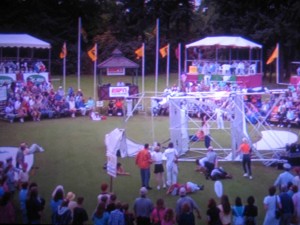 This obstacle is a little more unique. You’ll only encounter such a problem in your major tournaments, so amateurs probably don’t have to worry too much. But it’s always best to be prepared. If you come across such an obstacle, the proper shot is to bank it off the car, down the Subway banner, along the rails of the TV Tower, and out the pipe that’s aimed directly at the hole. I hope you’ve been practicing your Putt Putt. Remember, you have to play it as it lies, even if it’s on Frankenstein’s foot. 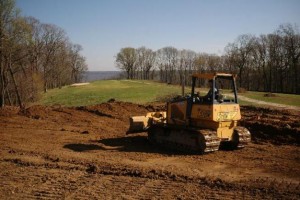 Not the above-ground kind, but the rarer below-ground kind. At the Canyon West Golf Course in Weatherford, Texas workers discovered a bulldozer buried underneath one of the fairways. The bulldozer was apparently involved in a prolonged game of Hide and Seek with a tractor, although the tractor remains MIA. Speaking for golfers, the last thing you need when you hit a chili dipper taking a large divot out of the ground is to strike a solid metal object with your club. Although this opens the question, what else one may find buried underneath a golf course? Vehicles, Pirate Treasure, time capsules, Jimmy Hoffa? Maybe that divot is just the first step to uncovering some buried treasure. Although not buried in the ground, this guy found a golf ball buried in a tree. 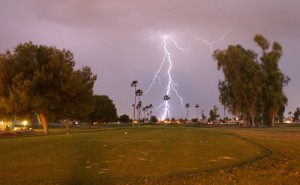 It always seems to happen when you are having the round of your life. The sky darkens, the wind picks up, and the thunder begins to roll across the golf course. So the simple solution is to turn yourself into a human lightning rod with a big metal golf club, right? Famed golfer Lee Trevino was once struck by lightning on a golf course. To others he offers this advice: “If you’re caught on a golf course during a storm and are afraid of lightning, hold up a 1-iron. Not even God can hit a 1-iron.” 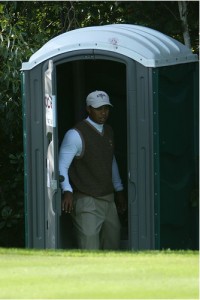 Who doesn’t love running to the toilet between golf shots? When you gotta go, you gotta go. But the convenience comes at the cost of the portable toilets being littered throughout the course. It not only provides yet another impediment in a successful golf game, it can also create a rancid smell. Should you find yourself pinned behind one of these johnnies on the spot, Roy McAvoy would tell you to ricochet the ball off the shitter with a hooded seven iron. If you become good at the shot, you can make money off your friends by making a few side bets. Plus, it’s a spectacular shot. And if anyone’s actually inside the portable toilet, it’ll scare the shit out of them when the side gets whacked by a golf ball. Literally. Just imagine pelting balls at the spot pot when Tiger’s inside. It’s irresistible fun, kind of like when you always aim at the ball collector on the driving range. 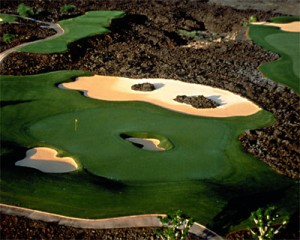 Lava is a common hazard in certain parts of the world, such as Hawaii. If you come across some, hopefully it is in a cool, hardened state and not the liquid molten variety. A piece of advice: if you ever shoot your ball into a river of molten lava, let it go, because, man, it’s gone. A bigger concern when dealing with lava is the possibility of an erupting volcano. That lava has to come from somewhere, so there’s bound to be a volcano nearby. In such an emergency, the proper course of action is a virgin sacrifice. So it’s a wise idea to keep one in your foursome. 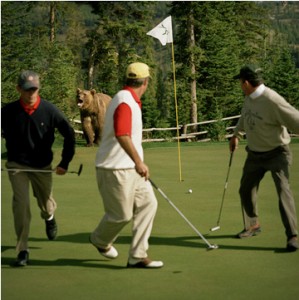 Bears are a lot things: godless killing machines, picnic basket thieves, airplane pilots, honey fiends, etc… A word of warning for golfers, they’ve also been known to hang out high above in trees, overlooking unsuspecting golfers on the greens. Keep an eye out should you find yourself on a green near some high trees. Also, some bears ditch the “death from above” angle and decide on the direct approach as seen in the picture to the right. Although I’ll have to admit that bears in trees works better for me. That way you can shoot them with a tranquilizer, and gives me an excuse to pull out this old Internet favorite:

As scary as birds might be, remember that you have a weapon in your hands and can propel an object at high-speed at them if need be. Here’s an example: 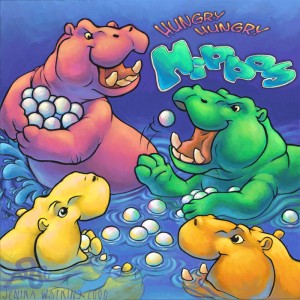 Seriously, these guys will eat anything. And they have a known affinity for eating balls. Who knows what else they’d chomp off given the chance? There have been no known reports of Hungry Hungry Hippos on a golf course, but the creatures love to hang out in water and that substance is prevalent on most courses. Plus, with the plethora of balls, a golf course seems like a natural hideout. So keep an eye out and think about investing in Hippo insurance. Who knows when we’ll read about the next Hippo attack? With insurance, you’ll be prepared when the hungry ones decide to come for you. And they will…