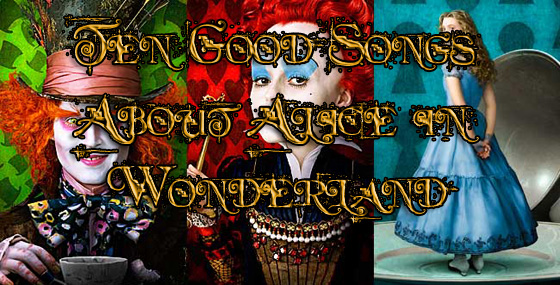 With Tim Burton’s Alice in Wonderland coming to theaters, it made me wonder how many songs the Lewis Carroll story inspired over the years (aside from the new ones, on Almost Alice). The answer is countless, way too many to list. Some are blatantly about Alice, while others pay homage to Alice using anything from a verse to an album name or cover. Gunaxin listened to the songs and picked our favorite ten. If you’d like to see what else could’ve been included, check out Wikipedia.

A true classic, and obviously a great song to drop acid to.

I don’t think this song is actually about Alice in Wonderland, but the video is one of the most memorable I’ve ever seen. It creeped me out at first, particularly the part with the cake, but as I grew up and heard more of Tom Petty’s music, it became one of my favorite ones he plays in concert.

Through The Looking Glass
Symphony X

This is indeed a symphony, a very long, great song, well worth listening to if you haven’t heard it before.

It would’ve been weird if Stevie Nicks didn’t have at least one song devoted to Alice, let alone an entire album.

Imaginations From The Other Side
Blind Guardian

This came out in 1995 but it’s something I could’ve sworn I banged my head to in the 80s. Reminds me a bit of early Metallica.

This is one of those very mellow songs up until it gets to the chorus, when it rocks out, making for a very confusing mosh pit.

This one isn’t for everyone (in fact I’m betting there is no one reading this who would like it), but it’s for that dark goth crowd who hangs at clubs that even Marilyn Manson wouldn’t visit.

Sure, it’s on Just Push Play, not Aerosmith’s best album, but here’s their take on the classic tale.

Eat Me, Drink Me
Marilyn Manson

Both the song and the album name were not favorites among Manson fans, but he more or less put this album out for himself rather than his fans, as a kind of music diary of his life. So I’m guessing in this tale, he’s Alice.

A Nice R&B song. Glad to know it’s not only rockers who put out songs about Alice.