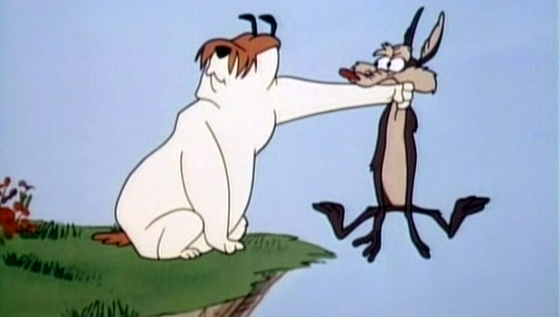 The Looney Tunes classics are without a doubt some of the most classic cartoons ever made. Eventually, the mainstays Bugs, Daffy, Sam, Porky, Sylvester and all the rest would go on to be the most well-known faces of the Warner Brothers lot. But there were plenty of other cartoons without the regular cast, and these were ten of finest.

Nugget O’ Info: (Wikipedia) “On CBS, the ending where Claude the Cat lands in an empty swimming pool and is shown dazedly swimming through the broken concrete was cut, fading out on the part where Claude is in the air shrugging just before he drops.”

Nugget O’ Info: Just in case you were wondering who the characters in this short were: Yellow cat; Claude, kitten; Pussyfoot, and the dog; Marc Anthony.

Nugget O’ Info: In an odd short where Mel Blanc did no voice work. Those jobs went to Daws Butler (Yogi Bear) who did both Ned and Ralph, and June Foray (Rocky the Flying Squirrel) as Alice.

Nugget O’ Info: The gophers names are Mac and Tosh. Mel Blanc does the voice of Mac, but Stan Freeberg does Tosh.

Nugget O’ Info: Though not credited and even today not 100% positive, it’s believed the narrator is voiced by John McLeish, the same guy who did nearly all of the original Goofy shorts for Disney.

Nugget O’ Info: This marks the first appearance of the eventual regular character, Tweety, but at the time his name was Orson.

Nugget O’ Info: According to Wikipedia, this is one of only a very few Looney Tunes shorts that concludes without an end card (simply with “The End” superimposed over an iris-out).

Nugget O’ Info: This is the first short featuring Sam and Ralph. Six more would follow and they are: Sheep Ahoy, Double or Mutton, Steal Wool, Ready, Woolen and Able, A Sheep in the Deep, and Woolen Under Where.