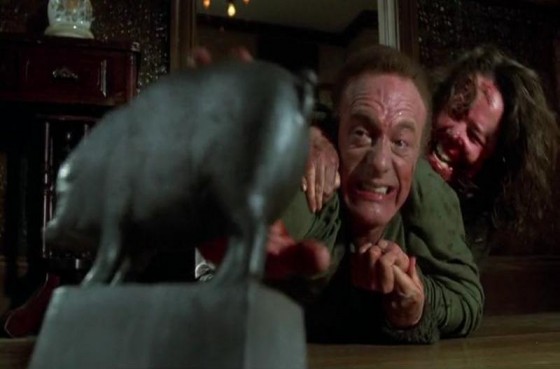 In response to the list done here on AskMen.com — a list that was, if anything, incredibly predictable and really half-assed — I have scoured the pantheon of film (and by scoured I mean looked a little, and by pantheon I mean some) and compiled what I think is a much better list. Enjoy!

In this classic look at a chase film where the intended target is "The One-Armed Man," because, well, he's apparently a guy with one arm, we see Harrison Ford wrongly accused of murdering his wife. So, thanks to a train crash, he escapes, flees, and attempts to prove his innocence. But that's not gonna be easy because Tommy Lee Jones is searching dog houses, hen houses, outhouses, and every house imaginable. Watching Ford perpetually escape Lee's grasp is pretty epic.

9) Return of the Jedi

Yes, the classic escape in the original Star Wars saga would be busting out the Princess from the Death Star in A New Hope, but this one was almost as stellar. Lando and his flapjack faced alien buddy, Nien Nunb, pilot the Falcon into the very core of the second Death Star after Han and his rogue band blow up the shield generator. Once they trash the entire works from the inside, they need to escape the encroaching explosions... and they just barely do, too. Even if Lando did break the Falcon.

Mike, Steve and Nick are prisoners of war in a riverside Vietnamese camp. Played to perfection by Robert De Niro, John Savage and Christopher Walken, the three are forced into a game of Russian Roulette. Mike convinces the captors to let them use three bullets, and after a tense round, they shoot the enemy soldiers and escape into the jungle. My mere words do not do this scene justice. But the scene does.

As tense and brutal horror flicks go, Wolf Creek is definitely in the upper echelon. And, it's rife with escape scenes... sadly, only one of which is, well, successful. Liz, Kristy and Ben are backpacking across the Australian Outback when they run afoul of a local named Mick.

Sure, Mick seems every bit the nice guy who wants nothing more to put them up for the night in a modicum of comfort. But this is a horror movie, and we all know it isn't gonna turn out well. After hours of torture and a death scene that's just plain wrong, both Kristy and Ben manage escapes, though only one is able to return to tell the tale. I'm not gonna tell ya who.

Buck and Oscar have broken out of a maximum security prison in Alaska, and after a battle with nature, they manage to find themselves aboard a cross-country train. The engineer suffers a heart attack just as the train picks up speed and he falls on the brakes, which lock, but the engine engages and shreds the stop-pads so the train can't stop. Though other train workers come up with ideas to stop the runaway, it's no use, and Buck, Oscar and train hostler, Sara, are trapped.

The toys we've all grown to know and love like our very own -- Woody, Buzz, Rex, Slinky, Jesse, et al. -- are trapped by Lots O' Hugs Bear (he's evil, ya see) on a conveyor belt being run into a trash crusher. Even after numerous other escapes, the toys cannot seem to free themselves from the maniacal grasp of Lotso and his gang. He leaves them to their peril on the conveyor, and as the toys hold each other prepared to 'die', the aliens that once lived in a claw machine use the garbage claw to rescue them. I...I think I have something in my eye.

4) From Dusk Till Dawn

The Gecko Brothers (criminals George Clooney and Quentin Tarantino) have taken a family hostage and after a trying road trip in an RV, they finally hit Mexico and stop for a drink at the Titty Twister. Once inside, they drink and drink and also drink while cajoling and otherwise acting like fools. But soon they discover the bar isn't an ordinary bar, by any stretch of the imagination. It quickly becomes apparent they are in the middle of a fight for their mortal souls in a vampire nest. Seth Gecko and his once-victim Kate are the last to survive, and eventually escape the horror.

When you're a man running from the most dangerous criminal on earth, and you're regaling the tale of your adventures as a stooly who worked for another set of criminals who have gone against (and even with) the very man you're ratting about to Customs Agent Kujan... well, life can get kinda tough.

Verbal Kint is the lone survivor of a boat heist gone irreparably wrong, where gunfire systematically murdered everyone in the hired crew. But the real ghost in the machine is one Keyser Söze, a man, who it seems, has escaped every ounce of harm going on around him. A man Verbal knows all too well.

In this quintessential tale of truancy and epic freedom, Ferris Bueller decides that he, his best friend Cameron, and his best girl, Sloan, have not seen enough of their own lives while being tortured daily in their senior year of High School. So he plans a day of escape; a day consisting of staying one step ahead of the Terminator-like Principal Rooney, as well as Ferris' own parents. Lucky for them, the adults in this movie seem ridiculously oblivious, and their day of escape is one that will never be forgotten.

Paul Sheldon is a world-renowned author living the life of recognition and fame. Annie Wilkes is a psychopathic harpy who wants nothing more than to continue reading the life-affirming exploits of Misery Chastain. Sadly, Paul -- the writer of said Misery novels -- has other plans and his last Misery novel was to be, indeed, the last Misery novel.

Unfortunately for Paul, he is about to meet his greatest fan in perhaps the single most inconvenient way possible. Once in Annie's clutches, her true demented self comes out and Paul finds himself under the watchful, reproachful, evil eye of one who doesn't want her Misery to end. Paul, ever vigilant -- even after a brutal hobbling -- manages to crawl to freedom.