Ten Great Android Games for Under $1 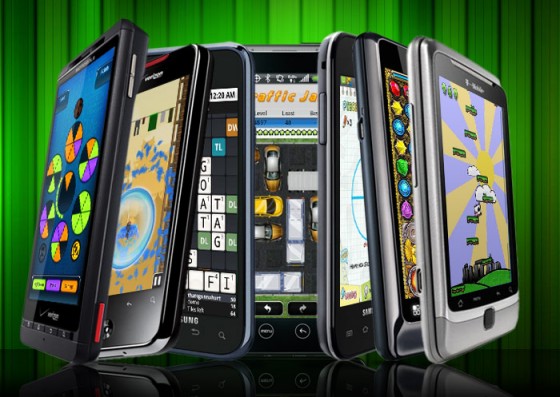 What’s more fun when you’re stuck at the DMV or a really dull wedding than whipping out your smart-phone and loading up a time-wasting game? Not much, that’s what. But what really fun games are you gonna look to when you have a far superior -and less ridiculous- Android? Well I’ll tell you, because as the owner of said Android, I have personally played each and every one of these -among many others I’ve deemed less awesome- and I’m pretty sure these ten are the ones you want to fill your down time with colorful excitement. You won’t have to break the bank to have fun either, as most of these are free, and the most expensive games on the list are only 99 cents. Game on… cheaply!

Zombies are all the rage these days, and when it comes to simple yet time consuming -not to mention fun- games where zombies are involved, Plants Vs. Zombies is the way to go. Sure you’ve seen the enormously popular game for PC, well Android has their own version that’s only slightly different. What matters is there, though: plants defending your back yard from the shambling dead. Great fun! Oh, and for just $.99, it’s as close to free as you can get. 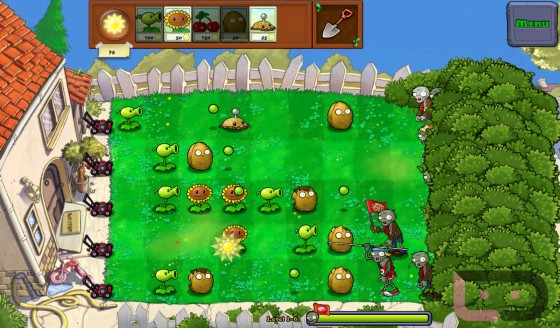 Do you like pretty colors? Do you like lining up like-looking objects to earn points? How about candy, do you love you some sweet, sweet candy? If you answered ‘probably’ to any or all of those inquiries, you might just like Candy Crush Saga. It’s as simple as matching at least three of the same type of candy and moving through the levels… but things do get tougher and then the frustration level sets in. Fun… but occasionally aggravating. Oh, and it is free. 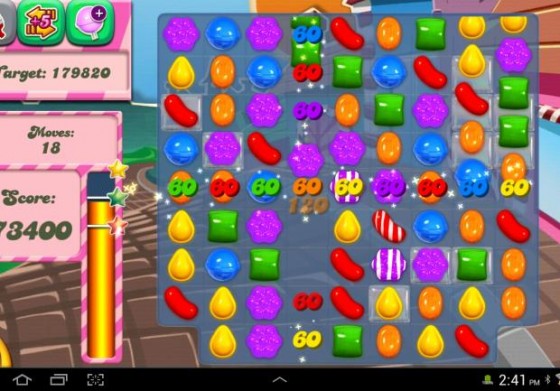 There’s very little required to know about actual golf for this one. Well, other than a rudimentary understanding that your ball needs to go into the hole. This game features tons of wacky levels with a plethora of traps, moving parts, and challenging spots from where to launch your ball. Yes, there are plenty of Power-Ups and things you can earn, too, but it’s the head-scratching rage you’re sure to get as you progress that really makes this a definite winner. Free! 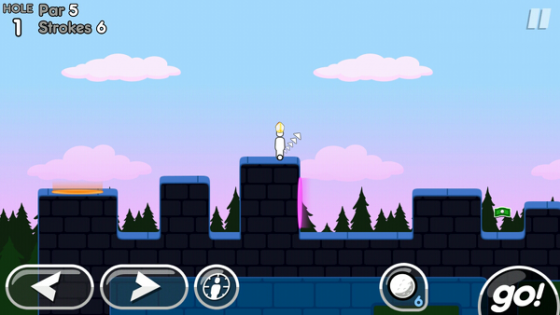 What do you get when you cross a women endowed with comically large breasts, a menagerie of weapons (like guns, for one), and a wild west town inundated with the walking dead? Well, in this case, you get a really fun shooter where the premise is as basic as they come: kill everything. Of course there are obstacles, and yes the play gets harder as you go on… but what game worth its salt doesn’t feature all those headaches? Besides, she has comically large breasts… and for free! Can’t beat it. 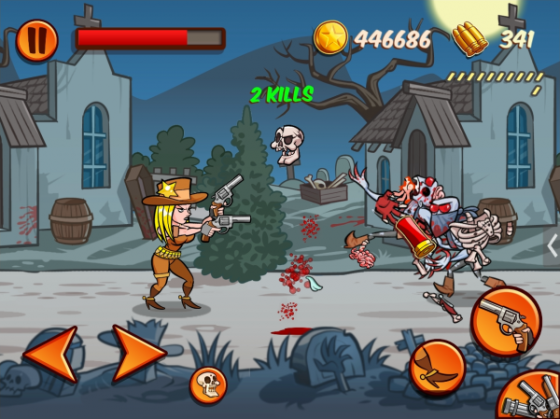 Not too many games allow you to literally type in what you need to complete a level, but it just so happens that Scribblenauts is one of them. If you need a gun, type gun. If you need a bridge, type bridge. Hell, if you need a potion to turn someone yellow, just type it in! Each level has an objective and, though you kind of want to just fill each area with as much useless crap as you can, it does set limits for your stupid imagination. But that aside, it’s a ton of fun and it will suck every ounce of available time you have away. Trust. This one is gonna set you back a whopping $.99, too. 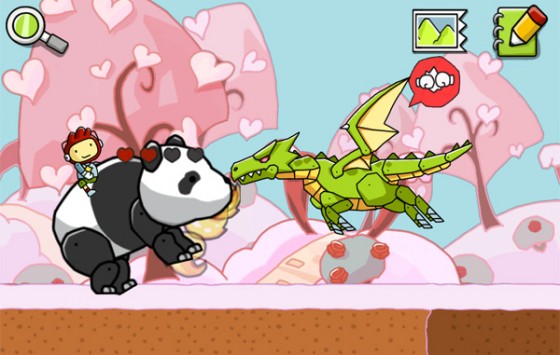 Though at the surface this might seem like just another ‘Bejeweled’ type game, there is a lot more going on within. In fact, it’s less like a color-matcher and more like a monster raiser! That’s right, kids, this game takes the best of that jewel game and throws in a little bit of Pokemon! Throughout the play of the game -which is color matching and creature vanquishing- you earn critters that you can evolve and boost and then add to your party! It’s a blast and it will kill a bunch of time, too! And even best of all: FREE! 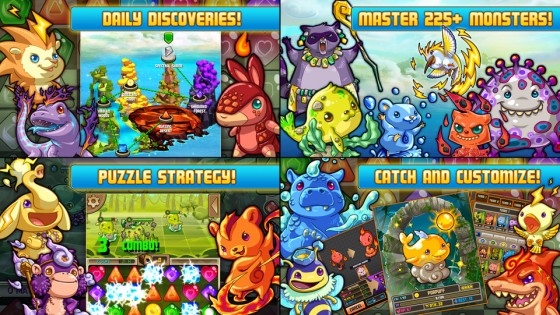 Sometimes card games can get downright dull. There are a ton of them, though, ranging from Solitaire to Blackjack and everything in between. But what if I told you that there’s a game that combines Poker with a bunch of beautifully illustrated faces from history? Yeah, people like Cleopatra, Leonidas, Billy the Kid, Beethoven… you name it, they’re in it. And each has a specific boost that aids you in the game and gives you better odds of acquiring a better hand. And as you go you earn more and more powerful cards. It really is a ton of fun, especially if you like cards but always hoped for a history lesson at the same time. Free! 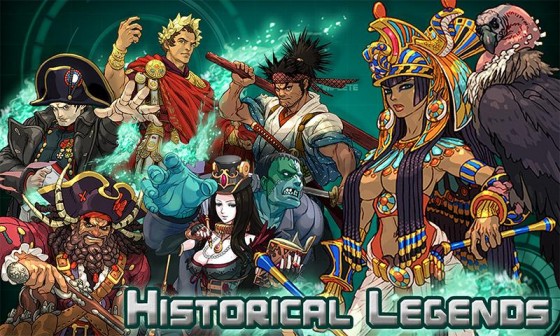 Monster battles, It’s really as easy as that. Ah, but there’s a lot more to it, and by a lot I am so not exaggerating. A LOT. You begin the game with your main character and as you progress you either earn new characters, earn the ability to summon new characters, or else trade with other players until your ranks are overflowing with awesomeness! And there are so many different creatures to attempt to earn it’s almost absurd. Every other week brings on new special runs and dungeons to explore, and it never really ends handing you all the cool stuff you need. It’s fun, challenging, and just time-consuming enough to get you through any boring activity. Like school, or a funeral! And it’s free! 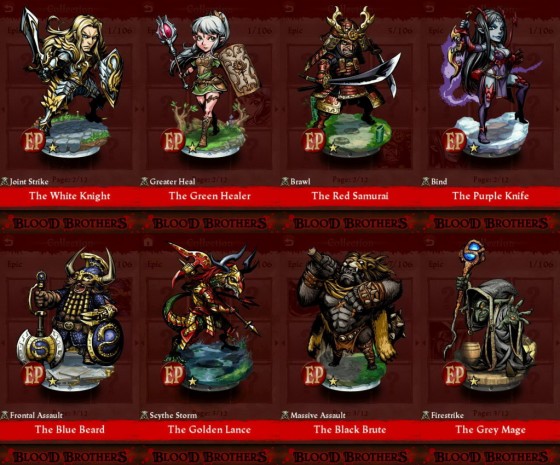 Do you like flinging hyper-powered balls at monsters? Of course you do, why wouldn’t you? In this game, the more creature cards you either earn or summon, the more powerful your balls become. I like saying balls. There’s not a lot else to really do in this game, but that lack of substance doesn’t detract from its excitement in the least. In fact, it adds to it because of the simple fact that there is nothing else to do other than collect cards and try to build the most powerful brigade. The artwork is stunning, the play is fast paced, and best of all you get to launch balls. Free balls. 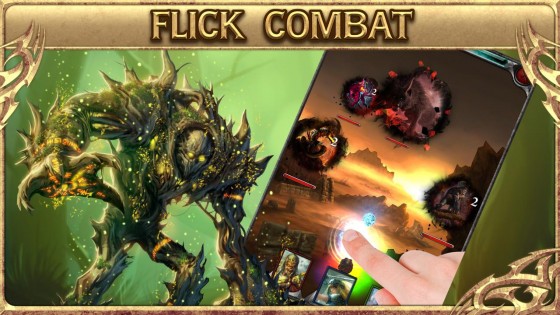 This is definitely my favorite over all. The graphics, above all else, are just astounding and remind me of old school Nintendo games from the 80’s, especially Mega-Man and Metroid. Yeah, they’re pixelly, and they’re meant to be… that’s the whole style, son. The game itself is a little more involved than others, wherein not only do you have to acquire and upgrade characters, but you also have to arm them with relics and place them in your party where they’ll be most effective. Yes, the game can auto-set your party, but it’s fun to set it yourself. As you go you achieve ‘gems’ which can in turn be turned into new characters. And then you fight stuff… lots of stuff. It really is a fantastic game and any fan of nostalgia will love it. And it’s free.