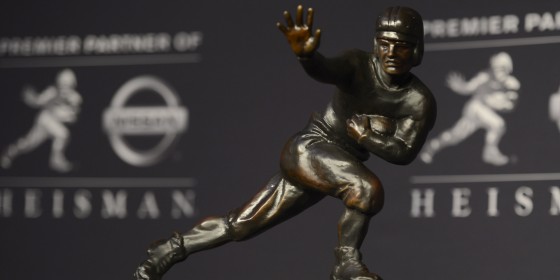 Every major sport has a laundry list of awards that they give out each season. There are so many awards that sometimes we get tired of hearing about them and forget they still exist. Did you know there is a trophy for best kicker in college football? Also, best punter?

The NFL has the Lombardi trophy, Major League Baseball has the Cy Young, the NBA has the Larry O’Brien Championship award, and the NCAA has the Heisman. As a football player, winning the Heisman trophy means that you will forever have your name listed among the greatest football stars in college football history.

It has been given out to one player every year since 1935, so of the thousands of players to play since, there are less than 85 athletes that can put that Heisman Winner title next to their name. So we decided to put a list together of the ten best Heisman trophy winners since 1935. This was one of the toughest lists to compile because almost all of these players were great, at least for one season. 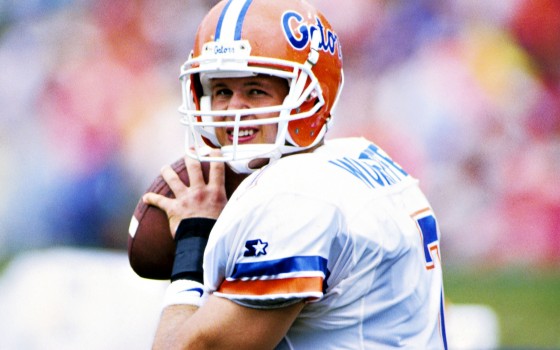 The Florida Gators steamrolled each and every opponent they faced in the 90’s thanks to the Steve Spurrier and his high scoring offense. Even with all the wins and lopsided affairs, Spurrier only has one National Title under his belt, 1996. That was the year Danny Wuerffel took over. He ended up with 3,625 yards, 39 TDs, and 13 INTs. Those are solid numbers for a QB these days. Back then, it was insane. He was averaging 10 yards per completion. He makes the list because he was so much fun to watch back in those days even though his Florida Gators were pounding everyone into the ground and then stepping on them just to make sure it was over. 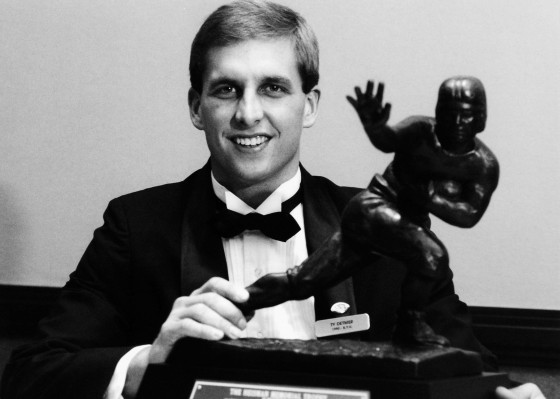 During his Junior season at BYU, Ty Detmer put up some ridiculous video game numbers. He helped that team upset the top ranked Miami Hurricanes and a ranked Wyoming team. He was the first QB to surpass 5,000 yards in a single season when he finished with 5,188. (48 more yards than David Klinger who also reached 5,000 yards in 1990) He was a throwing machine and ended up throwing 41 TDs but 28 INTs. It is hard to imagine a QB winning a Heisman Trophy with 28 INTs but that was just to show you how great he was in 1990. 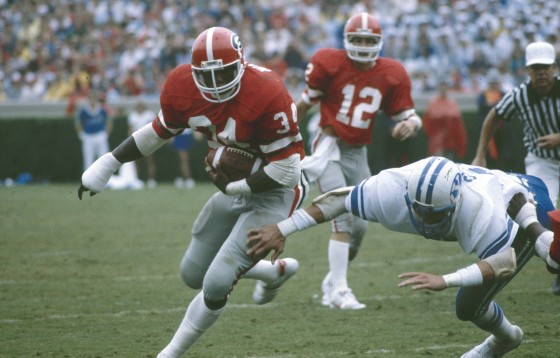 In his three years at Georgia, Herschel Walker remained consistent. As in, he consistently rushed for over 1,600 yards and 15 scores. There was never a time when he would have the football that he would not look for contact when running either. He loved to run over people like when he plowed right through Tennessee’s Bill Bates in 1980. He is one of the most feared running backs in college football history. His power was unreal and when he would take off, no one could catch him. Once he lowered that head, he became a bull that no matador would dare try to stop. 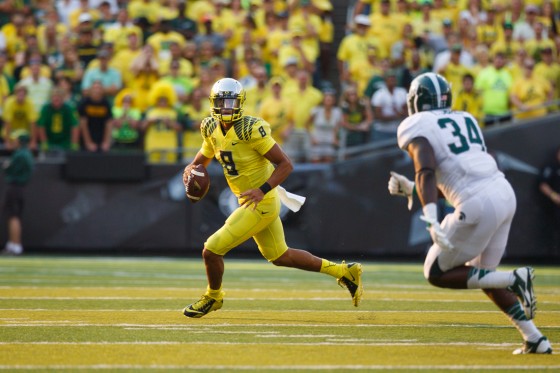 Efficiency equals success. Peyton Manning was never the strongest and he was never the best at throwing down field. He was, however, efficient. He figured out how to read a defense and how to throw a football quicker than anyone else. That is how he became one of the all-time greatest the NFL has ever seen. Marcus Mariota is in the same boat. At Oregon, he was more than just a system QB, he was a great leader. He also had the speed to run which helped him amass an insane amount of yards (5,224) along with 58 TDs total. He won 36 games, the Rose Bowl in 2014, and the Fiesta Bowl in 2012. He is the best QB in Oregon history. 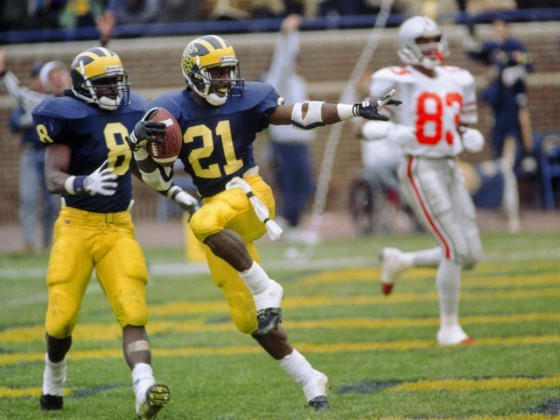 Everyone remembers the 1991 Michigan game against Ohio State where Desmond Howard took a punt return 93 yards for a touchdown and celebrated with the Heisman pose? That was just a small taste of what this guy did in his career with Michigan. He ended up having the greatest year of his life in 1991 when he caught 62 passes for 985 yards and 19 TDs. He also added 694 return yards and another 2 TDs. He finished the season with 1,859 total yards and 23 TDs. 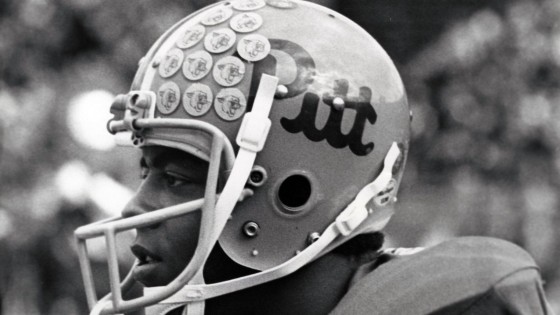 Tony Dorsett had 2,150 yards rushing in 1976. He averaged 179 yards rushing per game. PER GAME! His 22 TDs that season were also pretty impressive and he helped lead the Panthers to an undefeated season (12-0) and a National Title, which ended up being the last time they won one too. His running between the tackles helped him become a star in the NFL and one of the best Heisman winners of all-time. 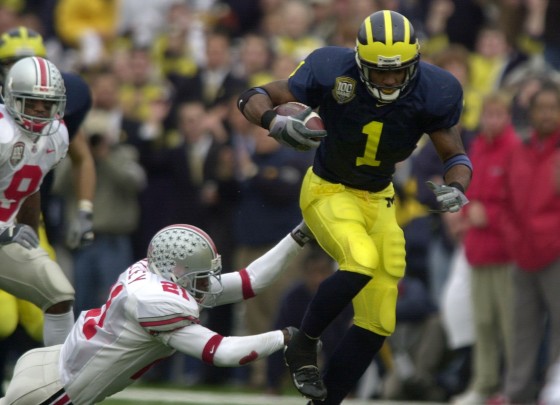 We can show you stats all day but the one thing missing is fear. If you were to ask all the QBs that played during the late 90’s in the Big Ten, which side of the field would you never throw to, they would all give you the same answer, Charles Woodson. He was a monster. He could cover anyone at anytime. He ended up with 7 INTs in 1997 because those same QBs must have forgotten where he was on the field. His size and speed made him hard to throw around but even more important, he was hard to stop. He was also the first defensive player to win the Heisman Trophy. He was THAT scary. 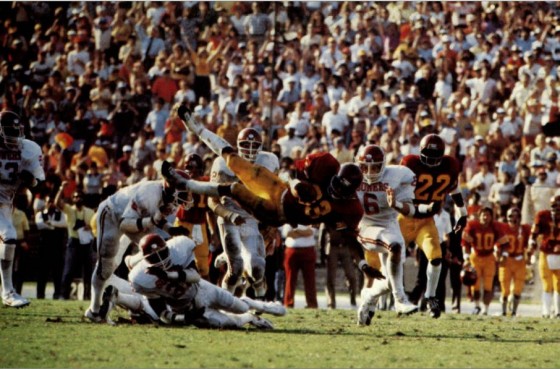 Before Barry Sanders, there was Marcus Allen. Marcus Allen rushed for 2,427 yards and 22 TDs in 1981 for the USC Trojans. He reached a single season rushing number that no one had ever heard of. Up until Kevin Smith (2007) and Melvin Gordon (2014), there had only been two players to surpass 2,200 yards in a single season, Allen and Sanders. The list is so exclusive, that even with the addition of those two, there are still only 4 players to ever surpass that milestone. 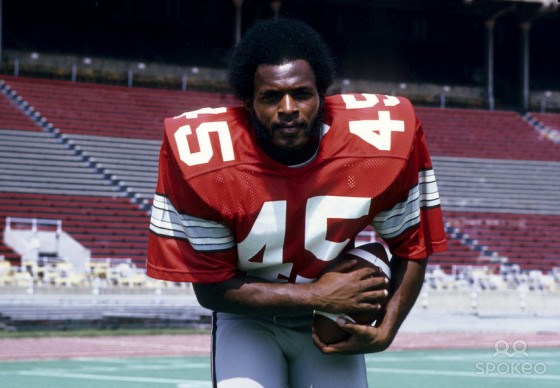 There has never been a back-to-back Heisman Trophy winner in college football history outside of the great halfback from Ohio State, Archie Griffin. He was a beast during his career at Ohio State and was simply too good for anyone to vote for anyone else. His numbers were great as he was always North of 1,500 but he was not as big on the scores which has led us to present you with a number one that you probably expected but weren’t ready to discuss… 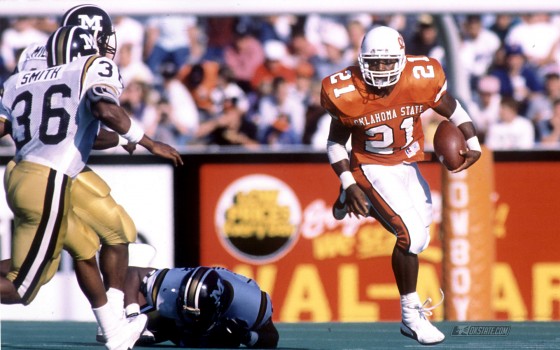 But why would you give the top spot to a guy who only won the award once when Archie Griffin won it twice? Well, maybe it was because Barry Sanders rushed for 2,628 yards, 7.6 yards per carry, 37 touchdowns, 515 return yards, and another 2 scores. And he did it all in 1988. He had more rushing TDs in 1988 then Archie Griffin had in four seasons with Ohio State. Does it make sense now?