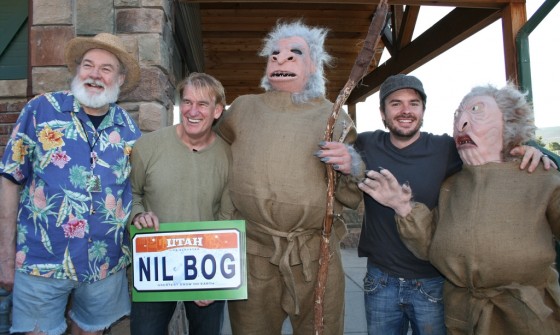 Just over a year ago I sat down to compile ten impressive horror documentaries. Something about having the filmmakers, writers, actors, and effects gurus answer the all important, “How’d they do that?” really appeals to me. Being a huge horror fan, a young man’s fear has long since become an older man’s intrigue, and I like nothing more than to be told how the entire process came to fruition.

In the previous list, I conceded to adding a few docs that weren’t so much about horror films themselves, but rather about horrific things and spooky occurrences. This time around I had no such issues and I’ve filled all ten spaces with films about films on everything from Return of the Living Dead to The Howling. If you love a certain genre of horror, chances are pretty good it’s got a representative here in one form or another.

So, if you’ve ever watched gory horror and wondered just how something was accomplished, or you wondered how a certain actor behaved, or even if you wondered why some piece of shit movie became so incredibly popular, these ten documentaries are time well spent. I’ve included clips, but some, in their entirety, are several hours a piece. A lot of time, sure, but well worth every second. Enjoy!

Narrated and hosted by acting legend Robert Forster, American Grindhouse explores the years when the exploitative movie genre was in full swing. Shameless, shocking, and downright filthy, this kind of seemingly lowbrow cinema is and was often overlooked as something more than just the dirt it was made to be. John Landis, Fred Olin Ray, and Herschell Gordon Lewis (among many others) make this a must for fans of that oh so risqué movie style.

For years — long before John Carpenter turned the holiday into something blood curdling — Halloween was a day where all the horror had been, for the most part, sucked out of the once fearful day. Since then? Well, let’s just say terror is back again, and this documentary covers the many years that Halloween has ruled the day and just why it’s so damn scary in the first place.

8) Unleashing the Beast: Making The Howling

As one of the top five greatest werewolf movies of all time, it took an awful lot to make The Howling. And no small amount of thanks goes to the amazing cast (Dee Wallace, Robert Picardo, Jon Sayles), each of whom is given face time to talk about their experiences on the film. In addition, interviews from Joe Dante and others on the crew make it a great watch. Sadly, the wonderful effects artist Rob Bottin isn’t as exciting as he was in The Thing doc, but oh well, it’s still really good.

7) The Horrors of Stephen King

There are very few people I would listen read anything from a cue-card to a menu, and King is one of those people. As a huge King fan, I relish the times I get to hear him really delve into the whys and hows of his books and what it is about them that truly frightens people. He speaks candidly about horror as a genre and lets many others from his many film adaptations take the reins as well. This was a made-for-TV doc from TCM and it’s definitely one of the greats.

6) Beware the Moon: Remembering An American Werewolf in London

Speaking of one of (if not the) top werewolf movies, this documentary about the making of An American Werewolf in London is a pleasure in its entirety. In fact, so much is dedicated to that amazing transformation scene alone that it’s worth the price of admission. Once again we get John Landis and many of the effects specialists behind so much of what went on in the film that I found myself wanting more. It’s that good.

5) Screaming in High Heels: The Rise and Fall of the Scream Queen Era

The time of the Scream Queen was something to behold. Though it seemed to last forever, it really didn’t, and the trio of Linnea Quigley, Brinke Stevens and Michelle Bauer absolutely made the most of it. This documentary shows how the three ladies more or less accidentally fell into their respective roles, from such films as Return of the Living Dead, The Slumber Party Massacre and The Tomb, and went on to become known the B-Movie world over as forces to be reckoned with. If you loved the years of the gorgeous ladies in peril, you’ll love this little gem.

4) Just Desserts: The Making of Creepshow

What do you get when you combine the collaborative efforts of two horror legends? In the case of Creepshow, you get a masterful pairing of Stephen King and George Romero, along with an A-List of amazing acting talent. Back when anthologies were nearly unheard of — not to mention an anthology based on a comic book — King and Romero gathered the likes of Leslie Nielsen, Ted Danson, E.G. Marshall, Adrienne Barbeau and Ed Harris to make one of the greatest horror movies of all time. Mostly narrated by Romero, this is an excellent documentary, although it lacks much from King, save for file footage. Odd.

It all began on Elm Street, and it all began when Wes Craven wanted to re-invent The Boogie Man into something so incredibly sinister and abhorrent that killing you in your dreams meant death in the real world. At its core, it’s about Freddy Krueger and his transformation from monster to cartoon, and back again. At its heart it’s about everyone involved in every Elm Street (aside from a scant few) and how it went on to change their lives, and how they made the movies even better. And, for every Freddy fan, it is definitely for you, and it’s made all the better at a 4-hour running time.

Slightly non traditional as documentaries go, Best Worst Movie isn’t so much about Troll 2 and what really went into making the once hailed “worst movie ever made,” but much more about the fans, its cult following, and one of its leads (George Hardy) and how he’s handled his life since and the onset of sudden stardom. George is most definitely the “star,” but it’s really about the thousands of fans and how they’ve helped transform the movie into what it’s become today: a favorite so incredibly ridiculous that it’s almost magical. If you haven’t seen Troll 2, take a day and check it out. Then, watch this and see if it doesn’t tug a few heart-strings.

1) More Brains: A Return to the Living Dead

You can always tell when a movie documentary has so much heart and the gathered cast and crew show so much love for their craft, because simply watching it makes you wish you’d been a part of it. Gathering everyone who made this movie the amazing horror/comedy/punk masterpiece that it was and is — up to and including the guys who drove the ambulance — More Brains is one of the tastiest documentary nuggets I have ever seen. If you love the zombie genre, or are just a horror fan, this is one you must see.