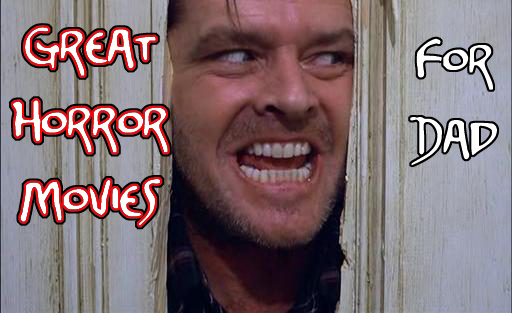 Just like there are a slew of gory, horrific flicks that focus on the sick and twisted mothers in our lives, there are just as many that feature dear old dad. Conversely, however, whereas moms tend to be slightly bent in the psychological department and exact revenge a bit more sadistically, dads tend to snap a touch more violently and seem to be more apt to come at you with an ax. So, without further ado, while you’re swimming down a few brews with your old man and reliving the glory days, why not thank him personally for NOT being one of these twisted fucks. Happy Horrific Father’s Day!

Night of the Hunter
Harry

Nothing says odd man out like a grizzled old stepfather who’s weaseled his way into the lives of his new bride and her kids. Nothing odd there, you say? Yeah, well this cat has LOVE and HATE tattooed across the knuckles of each hand and wouldn’t hesitate to threaten you to within an inch of your life just to find out where his wife hid her dead ex-husband’s money. Not a nice guy.

Sure he’s weak. Yes he’s a has-been who, at one time, swung a blunt murder weapon with the best of them. But now he’s but a shell of his former self. So why has he made this list? Because his son is Leatherface, that’s why. And if that’s not passing your psychopathic genes down the line like a boss, I don’t know what is. Oh, and his other kids are equally insane.

Boy, stepdads continue to get a bad rap in this tense little gem. Basically, Paul has shacked up with his new family, one that includes a hot little daughter, Christie, whom he continually torments both violently and sexually while threatening to murder mommy! Luckily, Christie isn’t your typical useless horror movie vixen and begins digging up some dirt on dirty daddy. It all comes to a very satisfying head, indeed.

Long after the Nightmare on Elm Street series took a real overtly comedic and ridiculous left turn, Freddy’s Dead was written to kind of wrap the party, as it were. And here, once again, we find the eternally hackneyed quip-slinging slasher haunting new nightmares, only this time it’s also those of his beloved and cherished daughter, Katherine. She’s a little pissed at pops for shaking mom to death right in front of her as a child, so it’s only a matter of time before Freddy “dies” in a whole new and contrived way. Oh, and I saw this in 3-D at the theater. Yikes.

When the indescribable, Lovecraftian mist begins to envelope the town, David and his son are trapped inside what seems to be the only safe building left. Sadly, safe is relative and what was a friendly, albeit tense, collection of town’s folk in a grocery store turns into a take-sides rebellion made all the worse by nightmarish critters trying to eat everyone. David is stern, strong, and passionate, but when it comes to the ultimate decision of sacrifice versus death by the unknown… well, it’s a conclusion you’ll never forget.

Larry’s brother Frank is dead. Not from any normal reason, mind you. No, he was flayed and ritualistically killed by Pinhead and his Cenobite cohorts all thanks to soul stealing and a puzzle box called The Lament Configuration. Kristy is Larry’s daughter and when she sees her mother dragging hapless victims up to the attic where a reviving Frank is feasting on blood, it’s only a matter of time before all Hell breaks loose. Very, very literally.

It’s never a good idea to ignore your new, quaint house the minute it actually tells you, in no uncertain terms, to “get out.” Yet, that’s just what the Lutz family does as they cozy right up to their new digs. But even after seeing bleeding walls and watching stuff fly around the joint, they still don’t get the hint, so the possession of George Lutz himself seems to be the best course of action. He begins to think that murdering his family is a fine idea, and it’s exactly what the house wants.

Ofelia is a beautiful, wide-eyed girl who is as innocent as they come. Too bad her mother’s new husband, Vidal (who happens to be a terrible, ruthless captain in the Spanish Army) is an absolute ghoul. Ofelia’s mom is pregnant and Vidal feigns interest while doing his evil best to shut down Ofelia at every opportunity. Her only means of escape is to tackle three trials, the outcome of which could save or destroy her.

Jerry’s a good dude. He is a very kind, loving — if not slightly overbearing and strict — stepdad who wants only the best for his family. However, as it is in every horror flick, all is not what it seems. In fact, Jerry is such a twisted, monstrous guy that it’s discovered his favorite past time is to start new families only to slaughter the lot of them when things start to go south. This, right here, is the ultimate in wacky stepdad flicks.

Jack is slowly, systematically going completely bat-shit crazy. Perhaps it’s because he works too hard. Maybe it’s because he drinks too much. No, the most likely explanation is the Overlook Hotel itself; rife with the unsettled dead and its revenants that haunt its halls. Oh, and Danny, Jack’s son, has a pretty odd ability himself. Can his Shining save the lives of his mother and himself from the perils of Jack’s warped mind and sharp ax? Maybe…