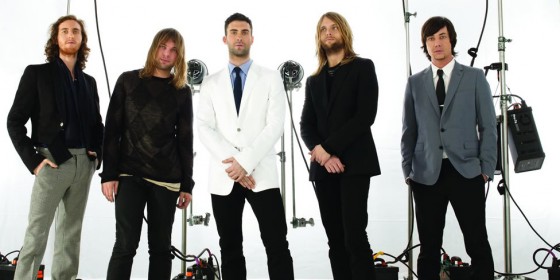 We love us some bands with numbers in their names! They’ve been around since the dawn of music with bands like The Five Stairsteps, The Four Seasons, and Three Dog Night, but the ones focused on here were all formed in the 90’s because the 90’s were cool and music was ridiculous and genres ranged from one end of the spectrum to the other. Few lasted, but oddly, even after some break-ups and hiatuses, these ten continue to get to it.

Most well known for their hit, “Cumbersome”, 7M3 (a name only cool people call them) formed in 1992 and has pumped out seven albums and a live set as well. In case you’re wondering, the band’s name comes from the cop show CHiPs and was the call sign designation for John… ya know, Ponch’s partner. And now you’re a little smarter.

Maroon 5 came about in 1994 as “Kara’s Flowers” with more or less the same line up as it has now. Most notably, sexy, often shirtless frontman, Adam Levine. Yeah, we all know he’s the draw, even if his voice sounds like a kid with his nuts in a vice. Oh well, enjoy a video.

The band “Blink” formed in 1992 in a small suburb of southern California and was truly instrumental (get it?) in the creation of “pop punk”, a genre creation I will never forgive any band for. Because, let’s face it, kinda really sucks. Anyway, eventually some other foreign band no one’s ever heard of also called Blink started some static, so the other one added a random 182. How nice of them.

Look, I have no issues with a band wanting to “borrow” their name from a TV show, especially if the show is cool like, in this instance, The X-Files. But for the love of all things decent, at least be awesome and have more than one big and one modest hit. Yikes. Eve 6 stole their name from said show and then went on to not be all that good.

So Matchbox Twenty hit the scene in 1995 and made songs and hits. Good for them. Rob Thomas is the driving force behind this slightly rocky mellow groovy outfit and the best thing he’s ever done was to jam with Carlos Santana. I guess their new album is pretty okay, if you’re into that kinda stuff.

So how many times did you hear “Kryptonite” in 1996? That’s right! Six billion! Obviously this was and is the band’s biggest hit, and anyone who claims a relationship with Nickleback deserves as few hits as humanly possible. Oh, and their name comes from directions to a bathroom when the band members were drunk at a Frat party. Just kidding, I have no idea where the name came from.

Vladimir John Ondrasik III. Yes, this is indeed the real first name of the pianist rocker known as Five for Fighting. And, apparently, a hockey fan. Think about it… anyway, his keys-driven musicianship has garnered him a few hits, including the sappy and sullen, “100 Years”. I guess he’s a nice guy.

This particular trio formed in 1993 and dropped some major hits including “Brick” and “Battle of Who Could Care Less”. And yes, BF5 is a trio, only using the term ” Five” because it sounded better than Ben Folds Three. Seriously. Oh and I strongly recommend “The Unauthorized Biography of Reinhold Messener.” It is amazing.

So we all remember Sum 41, right? It’s okay to just nod and go, “Oh… right! Those guys!” because their hit parade isn’t exactly epic. They formed in 1998 and immediately dropped the tune “Fat Lip” to worldwide audiences who obviously ate it up. Oh, and they named themselves after the fact that they had a show on the 41st day of their Summer vacation. Yeah, how creative.

By far the most unique band on this list (and one of my personal favorites), 311 is notably extra cool for having guys in the band with X’s in their last name (Hexum and Sexton), I mean what are the odds of that? Anyway, their albums have always sold well and always rock. You might remember them from such hits as, “All Mixed Up”, ” Random”, and “Down”. Their name means indecent exposure in Omaha police lingo. That’s cool.