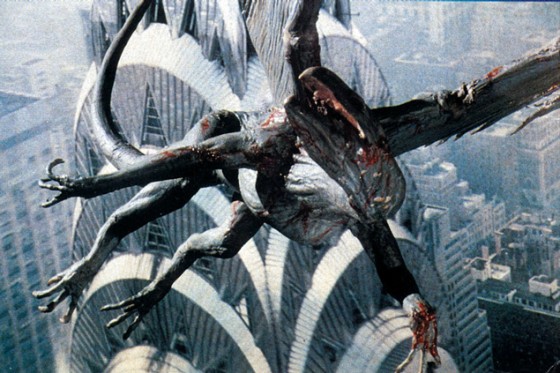 To literally no one’s surprise, the trailers for a third in the inexplicably popular Sharknado franchise have begun popping up all over. The Sy-Fy original comes out July 22 and stars returning heroes (?) Ian Ziering and Tara Reid, not to mention a crap ton of cameos who are sure to end up shark chow in one ridiculous way or another. Oh, did I mention it’s called, “Oh Hell No!”? Cuz of course it is.

I’m just as much a sucker for these goofy flicks as the next guy, but was there really a group of people who, after the second installment, said, ” Well, I see no reason why we shouldn’t nose dive this saga deeper into the ground than it already is… let’s make a Part 3!” Evidently there was and I missed the meeting. Anyway, it’s not like Sharknado is the first to take an already abhorrently daffy concept involving killer animals doing completely impossible shit and making a sub-basement movie out of the idea. In fact, here are ten times the flicks were so dumb they were actually slightly okay.

This has (are you ready for this?) Tiffany, Debbie Gibson, and Mickey Dolenz in it. I shit you not. Even if you are, for some reason, not watching this movie to see a giant snake wrassle a mutant alligator, you can at least see a Monkey and two former 80’s pop stars act silly. Win-win I’d say!

Jim Wynorski and Roger Corman, two giants in their respective fields of half-naked women battling huge, mutated critters films get together to helm this third in the Piranha trilogy. We find Rachel Hunter and Michael Madsen fending off the titular creatures til the bloody end. An end that, surprise, has another creature no one has seen the entire film! Yes!

Guess what this one’s about? Yup, the internal struggle between man and his psyche as a human being in the modern world. I’m kidding. It’s about a damn dinocroc fighting a damn supergator! Oh, and it features David Carradine in one of his last roles. What anyway to be remembered, huh?

Lest you believe Jurassic World was the first time geneticists futzed with several animal’s DNA to create a different, cooler, deadlier, and incredibly defiant animal, well, I ask you to consider Sharktopus. A beast created to actually, somehow, fight for us because that’s always a great and perfect idea. Needless to say, this thing doesn’t take kindly to its job. This has Eric Roberts and Ralph Garman, so you know it’s good.

After the classic that was Jaws, and the slightly-less classic Jaws 2, and the really not classic at all Jaws 3, it was only a matter of time before Michael Caine and Lance Guest starred in Jaws 4. Because those two seemed most likely to show up on the day they were casting. In this, the installment that nearly killed off a franchise, we find a shark out for… Revenge! Because everyone knows sharks plot that kind of thing. This is often considered one of the worst films ever made. For good reason.

Three of these were made largely because if something awful isn’t worth making into a trilogy, it isn’t worth making at all. Now I say awful with all the well-meaning love and good-natured ribbing I can muster, because although it is a colossally shitty movie, it’s still pretty entertaining and that’s the whole point, right? Anyway, the trailer gives you the gist of this thing.

This movie was one of those crazy low-budget affairs from the 80’s that tried desperately to revamp the giant monster craze led largely by Godzilla and his many devastating cohorts. It failed. Sure, it has some fine method acting by David Carradine and Michael Moriarty, but the stop motion effects wrench away whatever solid performances can be gleaned from some well-trained thespians. All in all, this is a classic you need to see once in your life.

This is a movie dealing neither with a fish brought back from the dead, nor one with bolts in its neck raised in a castle’s laboratory. See, those are things one might infer from the title. But oh no, this masterpiece is about a mutated snakehead because at the time snakeheads were all the rage in the news and that’s how Hollywood works. Now seriously, go find this gem as soon as you finish this article. Of course.

So do you like Treat Williams? How about Famke Janssen? Yeah? What about gigantic tentacles attacking a luxury ocean liner and some goofy action sequences speckled with torturous one-liners? Well, Sir or madam, Deep Rising might be for you!

I don’t care that it does star Ice Cube. Nor do I care that it stars J-Lo. What I do care about is that it has a bad ass gigantic snake. That’s all you need to know because if you haven’t seen this by now, well… it’s pretty stupid, actually. It does have some scenes that just barely give it a passing grade, but… look, just go watch it.