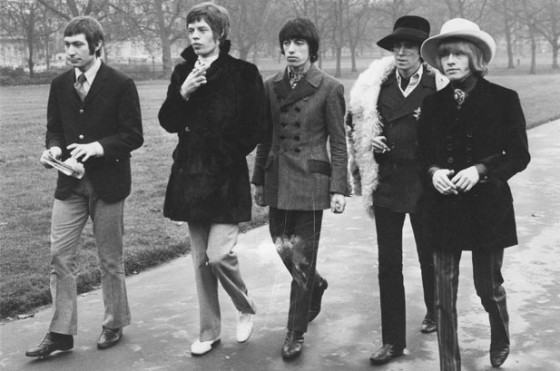 In honor of the anti-Beatles 50th anniversary, I figured it was time for just a little bit of controversy. Why? Because the Rolling Stones would so dig controversy. Just look at all the interesting tidbits that have plagued their existence over the past 50 years:

As you can see, controversy followed The Stones everywhere. So it only stands to reason that they ought to have a Ten Greatest Songs list, right? So here it is: The best of The Stones!

Why We Love It: Because it absolutely captures the essence of the mid-60s with pristine perfection. There is just a flavor of the Brit-pop movement in the style and tone, but underneath its patina, it's classic Rolling Stones.

Why We Love It: From the operatic opening to the cool, sly lyrical mid-point, all the way through its brash and indignant conclusion, this song is a rocking dirge the likes of which came to define The Stones.

Why We Love It: Because it's one of the first ever power ballads. Mick Jagger's sincere lyrics coupled with the beautiful guitar and perfectly placed piano combined to make this a tune that any serious rocker can flick a Bic to. Oh, and it obviously influenced such later '80s ballads as Bon Jovi's "Dead or Alive."

Why We Love It: Because who doesn't love songs that literally sweat with the era they're about? You can actually feel the Southern heat leaking out of every lyric of this Jagger-penned tune. It's gritty, dirty, and chock full of Stones innuendo.

Why We Love It: Because Shadoobee! Well, that and a sick, slick rhythmic guitar line with crunchy chords and a poppy bass... it's all there. Lyrics about depravity and the actions going down in New York help a bit, too.

Album: Out of Our Heads

Why We Love It: Because as far as Stones songs go, the opening riff to this tune is as classic as they come. Also, Mick makes us feel for him as he pines for anything that'll satisfy him, up to and including girly action.

Why We Love It: Because there is always a 'little yellow pill'. No burying the lede here, and certainly no hidden agenda, "Dr. please, some more of these... outside the door, she took four more"... it's about drugs and that's all there is to it. Not before or since has there been a tune about narcotics that sounded so amazing.

Why We Love It: Because musically it's perfect in every way. It's gorgeous and sorrowful lyrically and its instrumentation is crisp and almost breathtaking. Sure, it might not have been one of their biggest hits, but it is, without a doubt, one of their finest songs, hands down.

Why We Love It: Because how many songs can immediately make you think of war movies? Maybe a few, but "Sympathy" absolutely conjures up thoughts of Hell and even Hell on Earth. With a love-letter-like lyric set and a charging bass line and rattle snake-esque maraca beat, it's hard not to fall for as song about blaming it all on the wicked.

Album: Through The Past, Darkly

Why We Love It: "Because I just can't seem to drink you off my mind" is perhaps the greatest lyric written for any song ever. And no, that's not just hyperbole. Everything great about rock n' roll happens in this song: it has an amazing guitar line, a wicked Southern-Bluesy beat, filthy lyrics, and -- for as short as it is -- it kicks more ass than 99% of every other song in existence.

Why weren’t these included? Well, among other reasons, Aftermath produced so many hits and choosing the one song off of it was difficult enough. Besides, the one we did choose seemed to fit the list a little better.