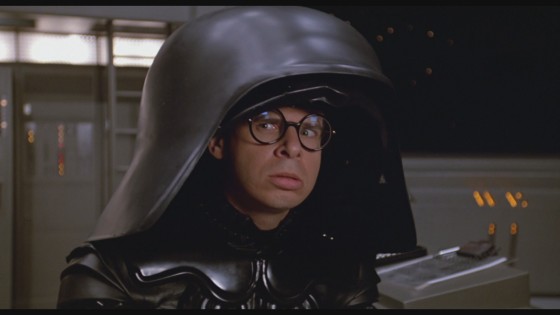 Making fun of a movie, music, or TV genre is pretty common place these days. Think about it: everyone knows the likes of Edgar Wright (Hot Fuzz), Weird Al Yankovic, and Police Squad, and their respective additions to the spoof generation. But what about specific styles within the genre? How many sci-fi spoofs can you think of off the top of your head? Maybe 3… 4? Well, here are the ten greatest of all time. And I can guarantee your favorites are on here.

The Good: It’s hard to deny the awesome alien hijinx between Jim Carrey, Damon Wayans and the perfect Jeff Goldblum as Wiploc, Zeebo, and Mac. They do their parts pretty nicely, and Goldblum steals the movie… much like just about every movie he’s in.

The Bad: Julie Brown as Candy Pink is impossibly irritating.

The Skinny: Your typical Aliens land in a swimming pool and turn out to be great guys story without too much of a twist. Except for Jeff Goldblum. Did I mention him?

The Good: Not only is this Ed Wood’s magnum opus (not necessarily a good thing), but it marks the last appearance of the once great Bela Lugosi. Oh, and if you happen to see Ed Wood with Johnny Depp (and you should) you get to see how it was made!

The Bad: Never intentionally going for the spoofy, trashy, terribly performed script, Ed Wood definitely made it that way. Trust me.

The Skinny: Strangely, the story makes a lot more sense on paper: Basically, a group of aliens implement ‘Plan 9’ whereby they resurrect the dead in order for them to stop a group of scientists from destroying the world. Okay, it doesn’t make much sense that way, either.

The Good: Choosing Seth Rogen to voice an extra terrestrial alongside the intrepid comedic duo of Simon Pegg and Nick Frost was genius.

The Bad: It’s a bit long, in both jokes and time. There could easily have been fifteen minutes to a half hour taken out with no discernible loss of quality and timing.

The Skinny: As far as ‘alien landing’ flicks go, you could definitely do worse than this. When Graeme and Clive (Pegg and Frost) run into an E.T., (Paul) all hell breaks loose and so do the gags heavily reliant on sci-fi fandom. But so what, watching Sigourney Weaver getting smashed by an errant space craft was pretty epic.

The Good: Even for a movie about giant subterranean worms, this is a wonderful place to start when playing Six Degrees of Kevin Bacon.

The Bad: Whether or not you find this particular nugget bad is completely subjective, but the movie is a bit schlocky and definitely reeks of B-Movie stench.

The Skinny: Handymen Val and Earl (Kevin Bacon and Fred Ward) discover that the town of Perfection is under attack from under the ground! Gigantic, prehistoric monsters are turning the dirt-water burg into Swiss Cheese and taking everyone with them.

The Good: Well, it does have some pretty funny moments, intentional or otherwise.

The Bad: The casting is ridiculous, the effects are borderline childish, and the story is loose at best. But what do you want for a lousy $9 million dollars.

The Skinny: In some dystopian future, water is a commodity, and everyone is out to get it. Enter the tongue-in-cheek pirates and their swishy swashbuckling. It’s a hoot! Or possibly not. But it’s a classic nonetheless.

The Good: Everything. Watching Mike and the bots (Crow and Tom Servo) riff on the “classic” This Island Earth is an absolute joy.

The Bad: Well… if there’s anything (and I’m not admitting that there is), it’s that it was too short. That’s right, a feature film that’s shorter than the TV episodes is severely uncool.

The Skinny: After years of being trapped in space aboard the Satellite of Love and relentlessly tortured by the mad Dr. Forrester of Deep 13 with crummy and painful films, Mike and his pals are finally forced to do their jobs in front of a theater audience. Hey, if it ain’t broke…

The Good: Tim Burton’s genius adaptation of a 1960s Topp’s trading card set plays exactly like the modern-day poking serious fun at the 50s B-Movie genre without actually showing it.

The Bad: Though Burton is a badass with visual effects, a few are stilted and rubbery. But maybe that was the point, no?

The Skinny: Another in the vast array of aliens invade Earth properties, Mars Attacks! has the one lone distinction of being based on a series of graphic trading cards. The images are spot on with their card-stock counterparts, and we get a bizarre ending in which Slim Whitman absolutely kills.

The Good: As a true Star Trek spoof goes, it’s hard not to absolutely love Tim Allen, Sigourney Weaver (again!) and Alan Rickman do their very best tongue-in-cheek representations of… themselves?

The Bad: Not too much, honestly. Maybe a bit ham-fisted and over-acted, but so was Trek.

The Skinny: Aliens under attack from more evil aliens believe that the television show Galaxy Quest was real. So much so, in fact, that they have their own ship built to exact specifications of the show’s fake model! Soon they enlist the cast to assist them, and it goes nothing but wrong.

The Good: It’s Mel Brooks! We all know he can deliver spoofs, right? Just take a look at Young Frankenstein and you’ll see how the master works when all cylinders fire.

The Bad: Well, even as a robot, it turns out Joan Rivers is just as annoying.

The Skinny: Brooks spoofs everything from Alien, to Star Trek, to Planet of the Apes, to Star Wars, all so he can get a gigantic maid to switch from suck to blow. Trust me, it’s one of the funniest parts. Pizza the Hutt is pretty epic, too.

The Good: Despite the Ed Wood entry this really is the granddaddy of all sci-fi spoofs, having debuted just after Star Wars.

The Bad: Though it has garnered ‘cult classic’ status at this point, it really is a shittily-made flick with little to no production value. And the audio is laughable at best.

The Skinny: More or less following the same plot and story line of A New Hope, this ‘garage’ (or should I say ‘kitchen’) version of the sci-fi classic is insanely goofy and ridiculous. Trust me when I say, one watching is all you’re gonna need… but you’ll never forget it.