Media > Movies > Eleven of the Greatest Spoon Moments in Movies

Eleven of the Greatest Spoon Moments in Movies 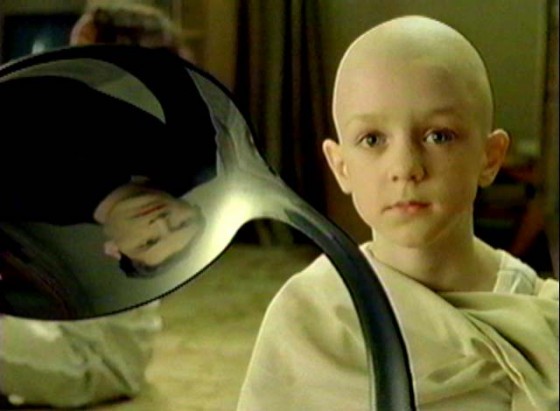 I don’t know what it is with kitchen utensils in films, but they always seem to make appearances when and where you least expect them. Sometimes it’s forks (See the Ruprecht scene from Dirty, Rotten Scoundrels), more often than not it’s knives (any given horror flick for the most part), but you hardly ever seem to see or hear about spoons. Why is that? Why do the most concave/convex of your silverware seem to get the shaft? Is it because they really are so innocuous? Ya can’t do much with spoons other than slurp soup and eat ice cream. Luckily, there are ten pretty important instances where a ‘spoon’ of one kind or another makes a rather necessary appearance. Check them out!

Largely considered one of the most ridiculous and bat-shit crazy movies of all time, The Room — written, directed, and otherwise pooped out by Tommy Wiseau — is such a convoluted jumble of nonsensical bullshit that I’m not even going to attempt to explain this hot mess. Wikipedia can do it FOR ME. Basically, there are pictures of silver all over the place, including spoons. And that’s the point I’m making here. Moving on…

In perhaps one of the greatest, yet sadly most underrated werewolf movies of all time, Dog Soldiers, we see a group of soldiers holed up in an old shack doing battle with vicious and voracious beasts. In a double spoonerism (Look it up), one of the men is named ‘Spoon’, and thus brings us to a great line that’s also an homage to a future entry on this list.

Perhaps one of the funniest scenes in movie history (yes, yes, more hyperbole) is this scene in Friday where Craig, who is home on a Friday after getting fired on his day off, pours himself a giant bowl of cereal. There’s a spoon involved and I’m just gonna let you watch the rest.

The movie Rango is definitely one of the most creative animated features to come around in a while. Directed by Gore Verbinski who basically said, “Hey Disney, you let me make this wacky cartoon and I’ll direct your fourth Pirates flick. Dig?” They did, and so we have Rango, starring Johnny Depp as a lost chameleon who reinvents himself as a hero. One of the animals is called Spoons, who just happens to be an old, gold-chasing mouse. Hey, they can’t all be winners, ya know.

The Empire Strikes Back

One of the most pivotal scenes in the entire Star Wars Trilogy (the first one, not the shitty one) is in Empire Strikes Back (the best of the best… of the BEST). Luke is being told to head to Dagobah by the spirit of Obi Wan while curled up in the fetal position dying of exposure on Hoth. Look, no one said this was based in reality. Anyway, he heads to said Dagobah and runs head-long into Yoda. And what’s the first thing Yoda does before even formally introducing himself? Feeds Luke. With a spoon.

It’s all about the magic, kids! So when it’s meal time at Hogwarts, it’s time to feast on any possible thing you can comfortably conceive! Jellies, Bubble and Squeak, Spotted Dick… it’s all up to… well, Dumbledore actually. Oh well, yeah there’s still plenty of spoons.

When one thinks of spoon scenes, one can’t help but think about spoons, medicine, and SUGAR! That’s right, we all know the song so let’s sing along!

Quite possibly one of cinemas finest comedies. Wait, didn’t I say that up there somewhere? Yeah, well, this time I really mean it! First of all it’s a Mel Brooks masterpiece starring Cleavon Little and Gene Wilder. Secondly, there’s an entire scene dedicated to spoons and farting. But probably not in that order.

Out of this entire piece of cinematic brilliance by Quentin Tarantino, there are literally hundreds of scenes that stand out for a few bits of goofy awesomeness. But in this particular one, Lance is Vincent’s hook-up. Lance is minding his own business eating a bowl of the classic (and no longer made) Fruit Brute — with a spoon I might add — until the phone rings. It’s Vincent. Trouble naturally ensues.

Indiana Jones and the Temple of Doom

This entire scene is pretty disgusting. But perhaps the most disgusting of all is the delicious consumption of monkey brains. With a spoon.

“There is no spoon.”