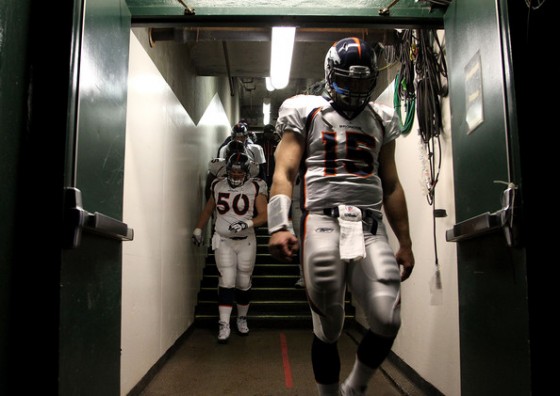 While all of us are getting drunk, giving up our children for tickets to Packers/Bears, or enduring the pains of winter, the football elite living above 5280 feet are worrying about their jobs.

More importantly, folks are wondering what will happen with Tim Tebow.

The famed savior of the chosen ones and college football was deemed worthy of expensive costs paid in last year’s NFL Draft, but that move was made by Josh McDaniels. He’s in St. Louis now and they have no need for a quarterback… and after questionable comments from Horse Tooth (that’s the Elway version of John… if you don’t get that, you aren’t reading this anyway) and a history attached to Fox that suggests Tebow won’t be of use, many are wondering if Tebow’s late-season stand was a waste and if he’ll be working for respect in another city near you soon.

Here’s the thing… it’s January. JANUARY. We have an eternity to live through before we have any idea what will happen with this. The Broncos would be insane to trade Tebow right out of the gate (McDaniels took that route with Cutler when he came in… doubt they want to plant feet in those same tracks) and thus our mind wanders elsewhere.

What’s Tebow doing to take his mind off the grind?

I have a few ideas… 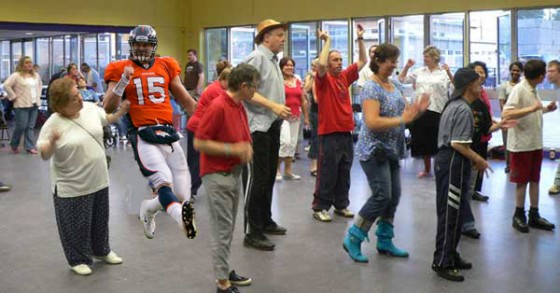 Check out this two step, bitches!!!

This makes sense, right? He’s down with the J-Man living upstairs, and those down with the J-Man like to spread his word and do things like this. They show up at random homes for those in need of help and they… well, they help. They do work without pay. It’s charity. At least I’m told it’s charity… like I would know. I just spent three hours Photoshopping Tebow into all of the bullshit you’ll see below. Think I’m into charity?

Tebow’s into charity, and if he wants to take his mind of Elway’s love of some retread veteran quarterback (you watch… they’ll add Mark Brunell or Kerry Collins or fuckin’ Jeff George… or Donovan McNabb… goin’ old at every other spot on staff list, why stop now), I bet he can be found serving Jell-O to those who can’t serve Jell-O to themselves. 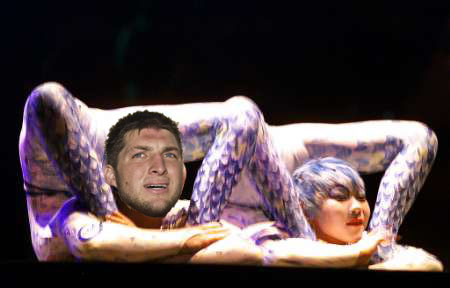 Regardless, Tebow could pull this off… Asian, Catholic, or otherwise. He’s a winner. 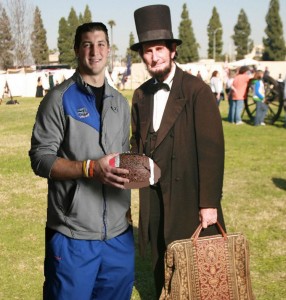 Which one has done more for America?

(People in Gainesville are seriously pondering that right now.)

I’m pretty sure Honest Abe was taller than Tebow but I can’t have that shit on my conscience. I’d rather have Abe pissed at me than God.

And since when does the leader of the free world carry his own bag? That’s amateur hour reenactment right there. They need to ship his ass out.

It almost looks like Tebow is popping a boner right towards Abe, doesn’t it?

If Tebow goes to Civil War reenactments, don’t YOU think he shows up in the ol’ Florida warm-up with a football in hand?

I’m just making observations here… was kind of hoping to see some pics showing a makeshift Robert E. Lee charging forward with his sword planted in some Yankee’s neck so I could paint Tebow as leader of the racist, blood-lusting south… but those fuckers at those reenactments stick to the script I guess. Couldn’t find one, so I’m going with the worst Abe Lincoln in the history of presidential impersonation. I was tempted to use one of the many pics of Tebow from pool side (see below) but I honestly think he shows up at this thing in the Florida gear.

Would have been awesome to have Tebow on that cannon in the background. All of the Florida haters would have been given at least three or four minutes of predictable jokes with that.

Tebow strikes me as a history buff, and if you’re going to find redneck behavior like this west of the Mississippi, its in Denver. 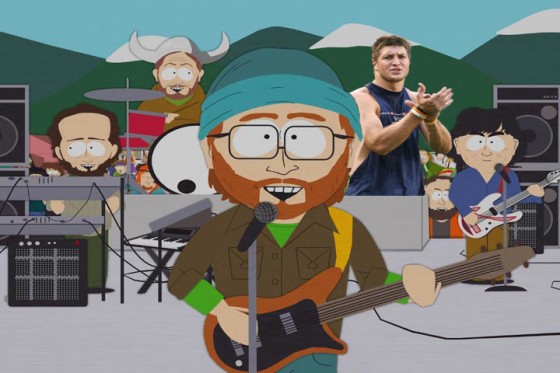 What? You don’t think Tebow has a little hippie in him?

He gives up showers, gets his card (it is Denver) and starts roasting buds, goes on the road and travels to places like Utica and Madison and fuckin’ Hempsted to see these multi-millionaire jazz wanna-be’s ripping off the rich hippie kids across the country?

Why not? HE BELIEVES IN GOD. He’s down to clown with just about any story you want to pitch at him. “John Fox totally likes you. No way Elway trades you away for a third round pick and a #5 from McDonald’s. These guys Phish, they’re REALLY good. It’s totally cool that they rip 45-minute bongo solos off, and they only charge like $80/seat to watch! You should go on lot just one time Timmy. ONE TIME. And eat this.” 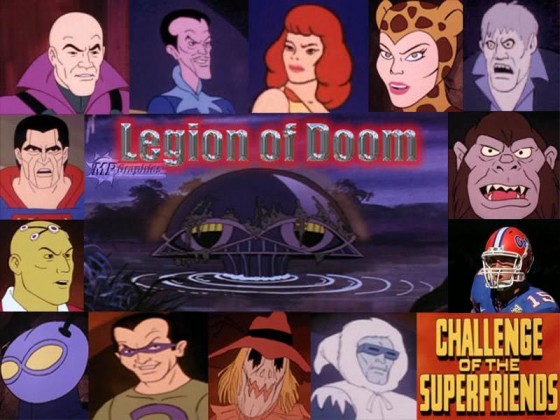 A secret life of evil, back when evil was cool

If Tebow is going to go evil, he’s going all out… and you don’t get more evil than this.

Except Slayer. Slayer is more evil than this…

… but I’d never invite the karma associated with Photoshopping Tebow into Slayer. I’ll take my chances with Bizarro and the Riddler (who I still don’t buy as a villain… he goes down with a simple taser for fuck’s sake) and the most underrated villain of all time, Solomon Grundy.

Like I said, Tebow will buy into just about any wild-ass story you throw at him. He’s perfect for the insanely idiotic plans written for the Legion of Doom… ’cause if you continually fail at taking over New York or San Francisco or Tokyo, you should raise your game and take on the world.

Tebow’s been taking on the world his whole life. He’ll turn history on it’s ear and make the Legion a winner. 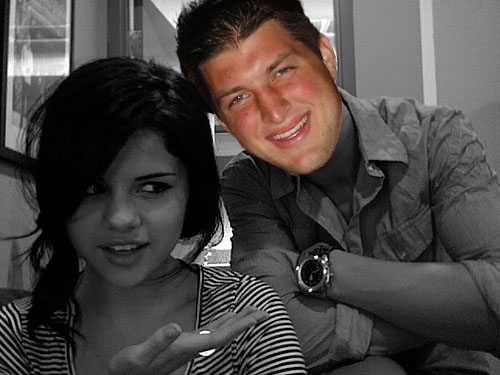 If Tebow wants to keep it clean cut and he wants to drive his promotional value and religious rants to the youth of America, he needs to be attached to Selena Gomez at all times.

They could lose their virginity together… whoops, too late.

I like to picture Jesus wearin' a tuxedo t-shirt...

He’s from the south.

(I assume he’s from the south… Tebow was born in the Philippines, and then he was homeschooled in Florida… is he even a citizen of this country?)

He can sell product. NO ONE debates that. They debate his arm, his mind, his ability, his message, his influence, his potential… but they cannot debate his ability to sell. He could be the first NFL player to pull off the Powerade jacket on the sideline.

He’d win more than Dale Jr… at least on the track. 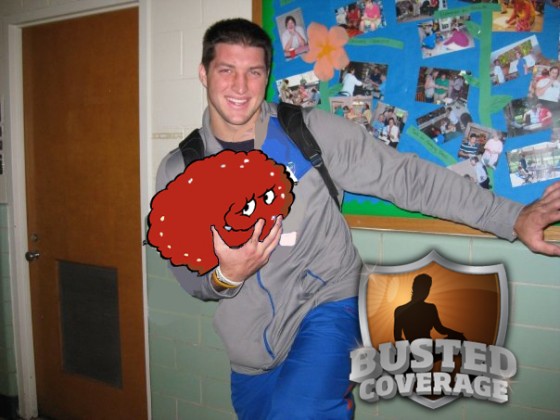 The ultimate guilty pleasure… at least in my book.

(He can’t even do the Heisman pose correctly… 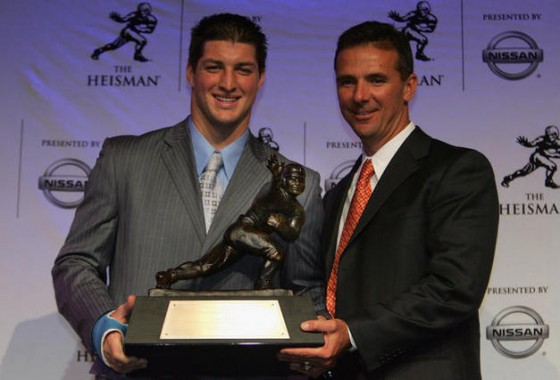 … it’s not that hard and EVERYONE gets it wrong.)

There is part of me that hopes Tebow is cool… not as mundane, controlled, coached, or mentally absent as he seems in interviews and appearances. I want to believe when the camera is on he knows its on and thus he’s on, and when its off he’s just Tim, guy who enjoys a good laugh on Adult Swim.

I dream of athletes that aren’t assholes.

(I think Nick Mangold might be a regular dude… him, Ron Artest, and that’s about it.)

Maybe Tebow isn’t an asshole. Like I said. Dare to dream. 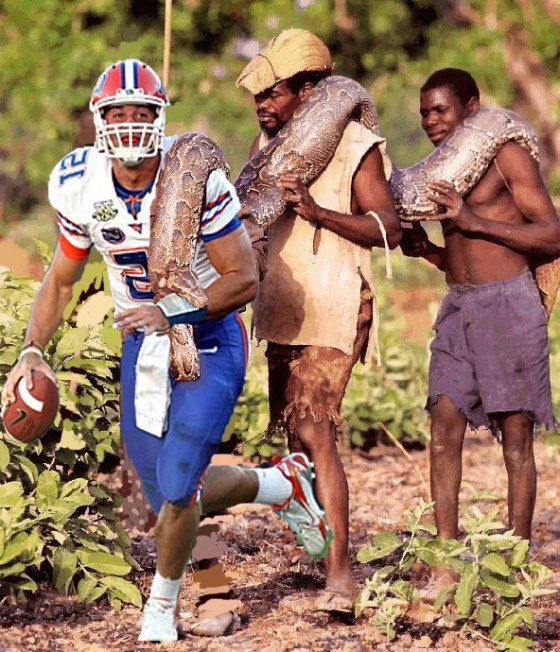 Tebow circumcised kids in the Philippines, part of his religious mission in life… at least that’s what he wants you to believe.

In truth, he’s one of the most disgusting men on the planet, taking trips overseas to enjoy brutal rituals of evil and sin, marching into the wild where young foreskins are valued as a delicacy and eaten as part of sacrificial traditions still maintained by the backward-ass natives. Foreskins are fried in urine of the tribe and ingested to appease Akmad, the native god of dick skin who will kill the entire tribe with syphilis if these rituals are not upheld.

He’s like Dexter but with dicks… and not even evil dicks that have murdered. Just young, poor, third-world dicks. 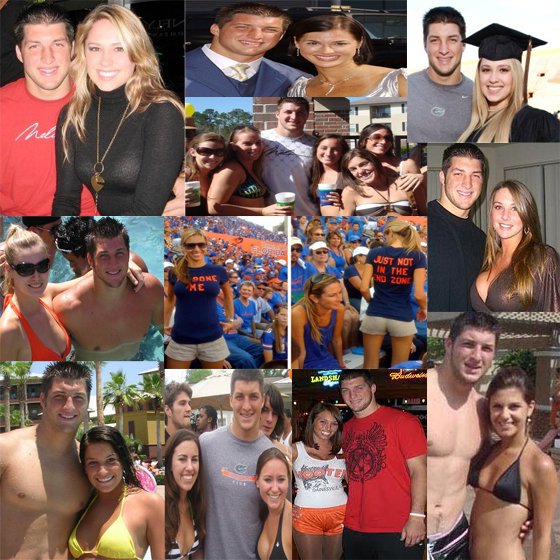 Don’t act like you’re not impressed… and I didn’t even include a pic with Erin Andrews.

He may be a Christian man, he may be the face of a generation, he may or may not be the future in Denver… but we bet Tebow is passing the time like any guy passes the time.