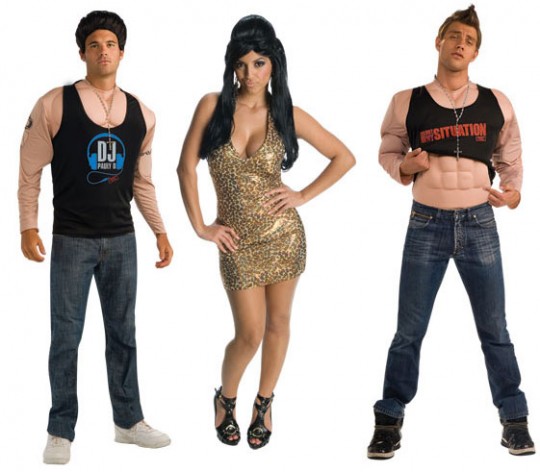 Do you like to think of yourself as “the funny guy”? Do you love to spice up parties with your signature brand of “wacky antics”? And do you have the taste and sophistication of an especially immature preteen? If you answered yes to any of those questions, then you’re probably a douchebag. And since Halloween is as good a time as any to warn the world about what a terrible person you are, we’ve assembled a list of costumes that will let anyone who sees you know that you should be avoided at all costs. 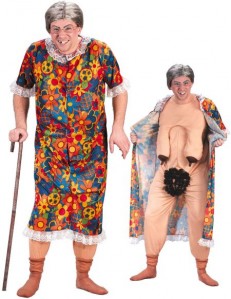 Halloween is a time for fun and fantasy, and don’t we all fantasize about 80 year old women flashing us every now and then? Wait, no we don’t. This is just horrifying. It’s like some sort of terrible Golden Girls fan fiction come to life. (And before you ask in the comments, yes—there is such a thing as good Golden Girls fan fiction. It’s the kind we write.)

But hey, if you want people to think you’re a transvestite whose favorite place to pick up chicks is the retirement home, then this is the costume for you.

Down for the Count 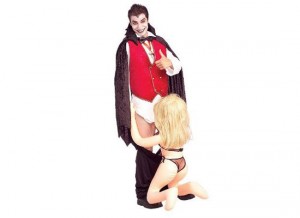 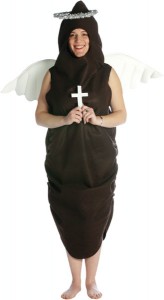 Speaking of puns, here’s a costume whose creators should be punished. In fact, you could almost say that these terrible, terrible people should be banned from the costume industry forever because their ideas are so shitty.

We’re saying this costume sucks, in case that wasn’t clear.

Oh, and if for some reason you want to dress up as human excrement, but still want to keep things classy by removing religion from the equation, then never fear! Tough shit, hot shit and bull shit costumes are also available. It’s just a shit cornucopia out there.

The Biggest Show on Earth 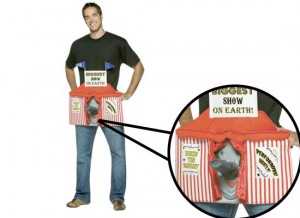 Anyone that’s so insecure about the size of their dick that they need to constantly tell people how titanic it is, even on Halloween, is probably not a great deal of fun at a party. Although, to be fair, they could just be trying to make a stupid penis joke. But if that’s the case, they‘d be better off going with… 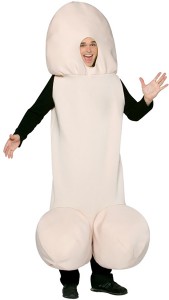 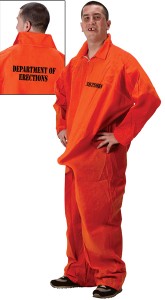 Yeah, it’s another dick joke. We’ve got a theme going, and we’re going to stick with it! This one combines all the hilarity of an erection with the comedic gold mine of prison rape jokes, which, as we all know, is an area that will never, ever grow stale.

We’re not sure if the missing teeth are part of the costume or if the only person that could be convinced to model it was an illiterate hillbilly. We’re guessing the latter, because that’s also the only kind of person who will find this getup amusing. 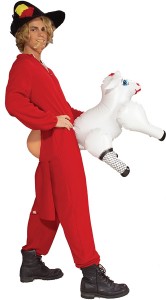 Of course, if there’s one thing even funnier than rape, it’s bestiality. After all, you can’t spell “bestiality” without “best!” “Best” is also needed to spell “Watch your best attempt at being the hit of the Halloween party end in disaster as everybody points out how retarded you look,” but that’s probably just a coincidence. 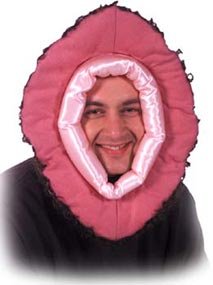 Amazon advertises this as “The Big Pink Hat,” a euphemism that will fool absolutely nobody. A guy dressed up as a giant phallus is disturbing enough, but there’s something especially creepy about someone whose idea for Halloween is to go as the genitalia of the opposite sex. Full body vagina costumes are also available—and they no doubt go great with the dick suit if you’re a couple looking for matching outfits—but the hat gets the nod for being douchier because the wearer looks like they’re perpetually crowning. It’s that extra gross touch that sets the professional douches apart from the amateurs; anyone can dress up as a vagina, but it takes skill and nuance to do it right.

In Bed with a Blond

We have to begrudgingly respect anyone who buys this costume, because it costs a staggering seventy dollars. Somebody who shells out that much isn’t doing it on a whim; they’re seriously dedicated to their douchebaggery, to the point where it’s become an art form for them. On the other hand, they might just be hoping this costume can double as the world’s saddest sex toy; it’s not like anyone who wears it will be getting any real action on Halloween. Or on any other day.

The Cast of Jersey Shore

Dressing up as a cast member of Jersey Shore is the douchebag equivalent of an ultra-religious kid dressing up as Jesus; they’re both impersonating their God. The only difference is that you won’t want to punch Jesus in the face (we hope).

If you’re going to try to pull this costume off, remember that you can’t just throw on the shirt and fake six pack and expect success; the hair and facial expression are both key components of the ensemble, and they can’t be bought. No, it takes hard work, dedication and a little bit of natural talent to develop a head that douchey. For anyone foolhardy enough to make the attempt, we wish you the best of luck. And by “the best of luck” we mean “get kicked in the dong.”