People have built underground passages, tunnels and secret chambers ever since they started walking on Earth. They have done so for unknown reasons, on practical grounds or just for survival. This is a very fascinating topic because every hidden place that is revealed brings forth a little more information about the past. 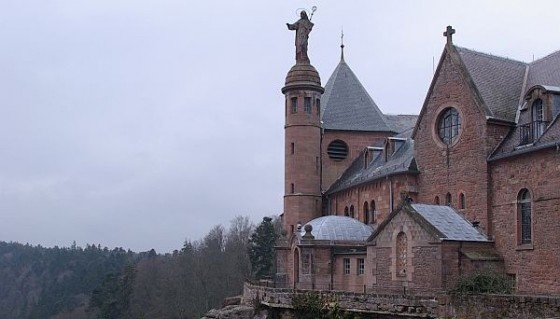 Mount Sainte-Odile monastery is situated in the Vosges Mountains (France), at an altitude of 750 meters and was erected in the seventh century. The monastery library has hosted many rare manuscripts through centuries and something strange started to happen in 2003: some of the volumes vanished without any trace. Since the library was perfectly sealed and visitors had no access therein, the volumes’ disappearance seemed like a total mystery. Authorities were called in and after they thoroughly investigated the place, they determined that a certain sector of the library could be moved to as to reveal a secret passage.

A hidden camera strategically set in the library showed how a local teacher, Stanislas Gosse, crept into the library and stole books. He was immediately arrested. It appeared that the man had found the map of the secret passage to the monastery’s archives and decided to embark on a daring adventure. In order to steal the books, Gosse climbed the outer monastery walls and climbed on a hidden ladder leading to a century old medieval tunnel. This long forgotten tunnel led directly to a shelf full of books located in the library. It is said that the passage had been built to allow elder monks to spy on younger monks’ conversations. As for Gosse, he explained his deed saying that he felt that the books had been abandoned and besides he was thrilled at the idea of an adventure. No less than 1000 manuscripts were later found in the man’s small apartment. They were all in perfect condition.

Many pubs flourished in the NY of the 1920’s and they illegally sold alcohol to thirsty travelers. One of the pubs, Club 21, seemed to have the best offer. The Club 21 owners also owned the building next door so they could store their vast alcohol reserves in there. The secret storage chamber had an enormous heavy door which looked like a normal concrete wall. This door weighed around 2 and half tons and could only be unlocked by introducing a 45 cm long wire in one of the many cracks around it. With a bit of push, the door could be open towards the basement of the building next to the bar, where hundreds of alcohol bottles were stored.

Thanks to this secret chamber and a special sliding system (the shelves were tilted so that the bottles would fall in the bar room) none of the clients nor the owners were caught red-handed, despite the various police raids. During the Prohibition period many celebrities and important political figures, including the NY major, visited Club 21 to get drunk.

The shocking secrets of the Haut de la Garenne Orphanage were revealed in 2008. The orphanage is located on the bucolic British island of Jersey near the English Channel. The abuse accusations were followed by an extremely appalling discovery on the site. Police investigation revealed an underground network of four rooms and what was found there shocked not only the island but also the whole world. Chains and handcuffs, children bones and teeth, bathtubs with traces of blood were found in those rooms.

The orphans were punished in those underground rooms. Authorities established that such atrocities were committed during the 1940 -1980 period, reaching a peak in the 60’s. Further investigation revealed that bad behavior was punished by lynching, forced drug consumption, sexual abuse and isolation. As if this were not enough, it was found that the notorious sexual harasser Edward Paisnel, also known as the Beast from Jersey, had visited the Haut de la Garenne orphanage to put in practice his sick desires.

Abuse and crime accusations have flooded the news because many victims have told their stories throughout the years. The only positive effect of this is the fact that the Jersey Island has taken the necessary legal steps to prevent such atrocities from ever happening again. Rumors now say that some of the stories about the atrocities that allegedly took place at Haut de la Garenne are simply tall stories, inventions without a true solid basis.

Several British and French soldiers were captured and detained as war prisoners in the Colditz Castle (Germany) during WW 2. The soldiers were able to plan an impressive escape in the attic floor of the castle. A small team of war prisoners led by Tony Rolt and pilots Bill Goldfinch and Jack Best built a false ceiling and a false wall made of wood and dirt, thus creating a hidden room in the attic. This was the place where they secretly began to build a glider. Surprisingly, the Germans never suspected that something was going on in the attic.

The soldiers have painstakingly managed to build a flying device using nothing else but jetsam materials found around the castle they were held in. They managed to climb their invention on the roof and decided to launch their glider and try to escape in the spring of 1945. The soldiers actually gave a name to their creation, the Colditz Rooster. Unfortunately, or better yet, fortunately the Americans attacked and took the war prisoner camp and the soldiers did not have to put their escape plan into practice after all.

However sinister the name of this building might be, the place was actually a place of hope 150-160 years ago. The house was located in Fountain City, Indiana, and it was a small brick building owned by the abolitionist Levi Coffin, member of the Religious Society of Friends. The place had many secret rooms including a small room which shared a wall with the sleeping room. The structure had nothing extraordinary in itself, but what happened there certainly was not common.

Coffin successfully hid 2.000 escaped slaves in this tiny room throughout the years. The slaves had usually escaped following the so-called Underground railway – a complex network of secret tunnels and houses used by black slaves to escape to the Free states and to Canada before the start of the Secession War. For 20 years these slaves on the run crammed in that room sometimes for weeks in a row, thus preparing their next move towards freedom. Each and every slave whom Levi Coffin helped has eventually gained his freedom and for this reason the man is also known as The Underground Railway President.

Passetto di Borgo was a secret tunnel from 1277 which was 800m long and stretched along the old Vatican wall which connected the city of Vatican to Sant’Angelo Castle (also known as Hadrian Mausoleum). The building of the tunnel constructed at the order of Pope Nicholas the Third and proved to be a vital escape route for several popes who followed him. Pope Alexander the Sixth used the tunnel in 1494 to escape the invasion led by Charles the Eight of France. Wicked rumors also say that the Pope used the tunnel to secretly visit some of his mistresses.

Pope Clement the Seventh used the tunnel to run away in 1527, while Rome was under siege. Dan Brown’s readers might also remember that the tunnel played an important part in his novel Angels and Demons. Nowadays, Passetto di Borgo is no longer a secret and is open to visitors. Local legends claim that if a man runs 77 times up and down the gangway, then he will get back his manhood, if he has lost it, of course.

4) Drug Tunnel between Mexico and USA

The tunnel represents a recent discovery, since authorities stumbled across it in 2010. It is 670 m long and has a small railway system, ventilation and fluorescent lightning. The hidden passage connected the kitchen of a dwelling from Tijuana, Mexico to two warehouses located in an industrial district from San Diego, California.

The tunnel is allegedly the work of the Sinaloa drug cartel from Mexico led by the country’s most wanted drug lord, Joaquin El Chapo Guzman. Dealers have used it to transport large amounts of marijuana, cocaine and amphetamines on the US territory. A hidden ladder near the tunnel leads to a 15 meter underground chamber which used to be the storing place for a huge amount of marijuana. The American and the Mexican authorities have seized more than 20 tons of marijuana from that chamber. There were/ are many other secret tunnels along the Mexican-American border but this is by far the most complex of them all.

The Grand Central Terminal was built in New York City in 1913 and is the world’s largest railway station in terms of the number of platforms. Therefore, it is natural for hidden places to be found in such a complex structure. A railway platform not mentioned anywhere stands out. It is known as the 61 Road and has a secret entrance and a passage that leads to a lift from the well-known Waldorf-Astoria Hotel. President Franklin D. Roosevelt used this secret passage as a private entrance in Manhattan.

This was the perfect way to avoid inconvenient questions and the reporters’ camera flashes. Besides, the president could also reach the hotel straight from the railway station. Moreover, this unseen path stopped the public from seeing that the head of state was suffering from poliomyelitis. Today, the entrance to the long forgotten passage is locked and millions of people are swarming around without being aware of it.

A hidden chamber from the Indian National Library from the Belvedere House, in Calcutta, is another interesting recent discovery. Several members from the Archeology Survey Institute from India noticed a mysterious chamber in the building while reconditioning works were being performed. The chamber has a rough surface of 92 square meters, but nobody has entered the place yet. Archeologists could not find any entrance point in the chamber, not even after they have searched each square centimeter of the chamber’s ceiling and walls on the outside.

The Belvedere House was the headquarters used by British colonist leaders and several theories have emerged based on that information. It was a common practice for the British to wall up convicts in so-called death chambers. One of the theories states that this room has the perfect size for such a use. Others say that the place might host hidden treasures since the British used to stuff their fortune in so-called blind chambers. A colonial leader was definitely a rich person, so this theory makes sense indeed. No wall of the room can be demolished because of the historical importance of the building. Archaeologists are still waiting that the Indian Culture Ministry grants them permission to drill a hole through the wall in order to search the place at least with a flashlight.

He is known as America’s first serial killer. H.H. Holmes was born Herman Webster Mudget and was an abject, degenerated human being. The man build a large building in Chicago in 1893 using the money he had gained from fraud, swindle and even paid killings. The building was officially used as a hotel/ hotel.

He also owned a drugstore on the same street which allowed him to become a respected member of the community. But a sinister monster was hiding behind the mask. The building Holmes owned was proven to be the place where terrible murders committed by the owner himself took place. Following his arrest, many architectural curiosities were discovered such as hidden ladders, false doors and many hatches that allowed Holmes to enter the guests’ rooms in the Castle of Crime – that was the place’s nickname.

The most macabre part of the building was made of the dissection room and the crematorium, both located in the basement. The victims’ bodies were dumped on a slide from the upper floors. This room was used as a torture chamber and it was filled with surgical devices and instruments, hence the name The Chamber of Horror. It is said that at least 50 women were slaughtered in unthinkable ways in this evil place.