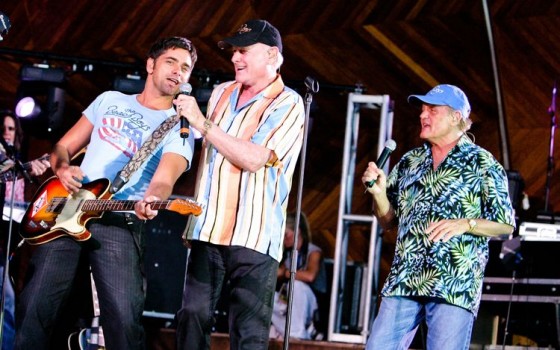 You know that old Reese’s Peanut Butter ad that featured the coming together of ‘two great flavors’? You remember: ‘Two great tastes that taste great together’, the whole, ‘you got peanut butter in my chocolate…’ thing? OK, now you got it. Anyway, take that analogy and throw it in to the typical disaster caused when an actor or actress decides to make an album. See where I’m going with this?

For some reason there is almost never a good flavor formed when a poplar TV star gets a bug up his or her ass to make music. I just can’t quite wrap my mind around the sudden need for a well-established actor to, out of the blue, record a wickedly shitty record when there are plenty of actual recording artists who do that really well on a regular basis. I’m quite certain there’s a special demon direct from the sodden bowels of Hell who starts these performers on the trails to musical catastrophe. I, for one, would like to meet this guy. Anyway, here are ten of the worst:

Okay, Okay I know there’s been an awful lot of JLH bashing over the years, and I’m not here to say anything about her body… other than the upper portion of it is pretty damn slammin’, but other than that, this is all about her voice that, for the duration of this song, made me want to jam my head into an industrial meat grinder. I think… no, I KNOW that her decision to record multiple albums is one of the signs of the Apocalypse. Hell is on Earth right now, and thy name is HEWITT!

I have no qualms with John Stamos as a whole. In fact, other than the comedic genius of Bob Saget on Full House, he was the only other cast member I could even remotely stomach (Yeah, Dave Coulier can march into traffic). He was far too similar to The Fonz, however, and that’s just wrong on so many levels. Then, as The Beach Boys made an appearance or two in the show, this song was performed and later recorded for the Tom Cruise vehicle, Cocktail. If Purgatory has a soundtrack, this shit is it.

First of all, Bernie Taupin couldn’t look any more uncomfortable if Elton himself were dangling his crotch tackle in front of his very eyes. Then comes the evil that is Shatner’s rendition of a really good song done really, REALLY horribly. Basically spoken word done in the classic Kirkian hesitation style, this song sets of pain nerves in my ears that run waves through my body. The pain is excruciating. Enjoy!

Gorgeous? Yep. Talented? Certainly. F’ed up 80’s-style fem-mullet? Oh HELL yes. This video is from the movie Xanadu, which just so happens to be one of the earliest flicks I can remember watching on HBO. Does any of that make this song any less like a hot skewer to the eyes? No sir, it does not. Sure, this one’s a little different, considering she’s really more known as a vocalist first, but, having wandered into acting (Grease) and hen to go to this… yeah, she belongs here, alright.

6. Eddie Murphy – Party All The Time

This song just sweats funky, cloying 80’s perspiration all over the room. Witness as Eddie Murphy, the foul-mouthed comedian and oft-times voice-over actor, tears it up with Rick James and his ultra-synthesized back beat. Can you stomach the gut-wrenching lyrics as Eddie explains to us how his girl naturally enjoys attending after-hours events quite frequently? Then shoot yourself in the face.

Oh wait so… Now hold… Oh, shit, no don’t… Oh dear Lord! What the Hell is the deal with the looking-over-the-shoulder thing? Is he nervous? Was he just so damn ‘Sonny Crocke’t that it was difficult for him to stray from the character to a more, um, EXACTLY THE SAME DAMN THING IN THIS VIDEO! Oh, please tell me he never, EVER released another collection of revolting tunes… PLEASE!

I’m not sure what this video makes me want to do more: Punch babies or drop-kick a kitten, and I’m really not positive which part, specifically, wants to make me commit these heinous acts first: the horrific dancing or Spock’s Lovecraftian caterwauling! Just watching a few seconds of these ‘dancers’ go into throes of epileptic gyrations gives me more reason to want to club infant animals. I’m sorry, really.

Look, I’m fully aware that this video is meant to be entirely tongue-in-cheek, and it is really damn funny. However, Hasselhoff currently has a fruitful singing career, especially in Germany, or so I understand. This phenomenon baffles me. I remember this ‘actor’ in such hits as Knight Rider and Baywatch and never really said to myself, “Hey, you know what, I bet this guy can F’ing rock like nobody’s business. He really ought to put out several mediocre records.” Yet, as it stands, he has. Wow.

Sadly, I was tempted to start this particular paragraph with the word ‘Whoa’, but I resisted. Joey Lawrence; let us tick off a few career points from your childhood. Let’s see: Gimme a Break, Blossom… nope, got nothin’ else. So once again we find a half-ass acting ‘talent’ choosing to take the other fork in the road and try his hand in the music biz. Then, oh mercy, try to spearhead a tour with two other has-beens named Joey: McEntyre and Fatone from some other dumb ass boy bands. Kill this ass hat as soon as physically possible. For me. Please.