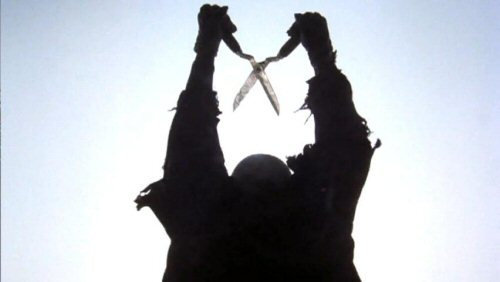 When I started this list I made a rule: No one super famous. That meant no Jason Voorhees; no Freddy Krueger; no Leatherface or Pinhead… and especially no Michael Meyers. I know what you’re thinking, ‘Who does that leave?’ Fortunately, a well known fact of the slasher genre is that after the immediate success of the original Friday The 13th, there were tons of slasher flicks thrown out in the world. So, even though I had plenty of fodder to rake through, I still managed to keep it fairly close to flicks most of even the slightest of Horror/Slasher fans have heard of. Enjoy!

I love slasher flicks that take place in small town America. It gives the film more of a ‘real feel’ to it and makes it a little creepier in the process. Ray is fond of killing brides and the people around them and now he has targeted a new girl. The unfortunate part is that no one believes her and the only help she’s getting is from an ex-boyfriend. This does not sit well with the groom to be. The blood flows pretty freely in this one and Tom Hanks makes his first appearance in a film that he probably wishes would disappear from his resume.

Yeah, I know that it’s a cop out name, but giving it anything else would take a pretty good twist and kind of ruin it. We get Jamie Lee Curtis in another of a string of horror flicks and this one has the unique concept of taking place on a train. The gore is a little light and so is the nudity factor, but it’s still a fun flick.

Truth or Dare: A Critical Madness – The Copper Masked Killer

People, at this point, were starting to make films shot on videotape and this was one of the first ones out there. It tells a fascinating story of a man who catches his wife cheating and has such a tenuous grip on reality that he snaps from the revelation. In the insane asylum he manages to get a hold of a knife and mangles his face. They allow him to make a mask made of copper that is obviously rubber, but we don’t care. Long story short, he gets out and wreaks some major havoc basically slaughtering everyone in his path to his cheating wife.

BE CAREFUL! This clip is NSFW! It’s got slasher babe boobies in it!

A lot of slasher flicks hide the killer’s identity from you until the end with some big reveal. Not this flick! We get a radio announcement that a killer is on the loose and sure enough, there he is. And he uses a huge wood drill to kill his victims. Sure, it’s an electric drill and we never see the thing running unless it’s a close up so they can hide the cord, but so what? We get the perfect slasher formula. Lots of pretty, naked girls, a vicious killer and a little humor to help take the edge off. My favorite moment is when the pizza guy knocks on the door, but it ain’t the pizza boy. The girls ask through the door what the damage is and the killer responds with, “Six, so far.” Hilarious.

Before Jason, Michael or even Freddy hit the scene there was Arthur Malcolm. A down on his luck artist who decides to rob a random woman. She catches him at her bedside table and whacks at him with the nearest weapon: a spoon. She takes out one of his eyes and ruins any chance of him being a real artist. So, he does the only sane thing, and takes this really sharp spoon that he has made and goes after women to take their eyes and make weird art with the eyeballs. Awesome.

This is one of those slasher flicks that doesn’t try to be anything more than what it is. Seems a while back, Ed, Jr. was trying to give Big Ed a proper birthday present by cleaning all of Big Ed’s guns. Yeah, one went off and blew a big hole in Mom. Big Ed was never the same and spent all his time drinking and hunting. Jump forward and it’s Fall Break at the college. Ed, Jr. and his friends get an offer to go close up Big Ed’s condo for the winter on this desolate stretch of beach.
It isn’t long before women get gaffing hooks to the crotch and overly-tan muscle boys are on the wrong end of a boat motor. And, even though Big Ed is just a regular guy, he’s not easy to kill. Even after being cut in half by a car he still manages to cut off a cop’s leg with an axe before he collapses while laughing! No one is as macho as Big Ed.

My Bloody Valentine – The Miner

In the town of Valentines Bluff there is an annual Valentine’s Day dance. One year the people, who are supposed to be in charge of security at the local mine, leave their posts to attend the dance. There is a cave in and only Harry Warden survives. They find him eating the others who died and Harry’s mind has snapped. The next year, at the dance, Harry kills the people responsible and warns them to never hold another dance. Jump forward 20 years and the kids decide that enough is enough. Time to hold a dance! Then, no surprise, the killings start up again. The scene where an old woman flops out of a dryer at the laundromat and has been in there long enough to turn into jerky is worth the entire flick. Add a clever twist ending and a bizarre last line and you have what makes a slasher flick work.

Back in ’84 my buddy Doug actually had to cross a picket line to see this one. SILENT NIGHT, DEADLY NIGHT tells the poignant tale of little Billy Chapman who, at age 8, saw his father murdered and mother raped and killed by a man in a Santa suit. Needless to say, this did not go well with Billy and then being raised in a twisted, Catholic orphanage with abusive nuns for the rest of his life did little to help his temperament. On his eighteenth birthday he is forced to dress like Santa for a toy store that he works for. This is the proverbial straw and he soon goes on a killing spree.

At the height of slasher mania came this little gem. Taking place in a Christian campground all is idyllic in the rustic woods. Until Angela comes along. She is a shy, introverted girl who is hiding a terrible secret. With innovative kills like a girl getting hers by curling iron to that tender place between the legs, this is a harsh film that ends on such a bizarre note that you will never see it coming. Even when you know it’s coming, the ending still manages to pack quite a visceral punch. What’s the ending? Yeah, right. Go see the damned thing. There are two sequels that are much less mean spirited and kind of fun to watch with Bruce Springsteen’s sister Pamela as Angela.

Here we have a non supernatural killer. He was badly burned as the result of a camping prank. He goes into the hospital and comes out a wrecked man. He heads for the woods and starts doing what he does best with a pair of gardener’s shears. To add to the fun we get people like Jason Alexander and Fisher Stevens waaayy back when. The excellent makeup by Tom Savini makes this one a classic of the slasher genre and a definite must see.