Ten Legends About US Presidents 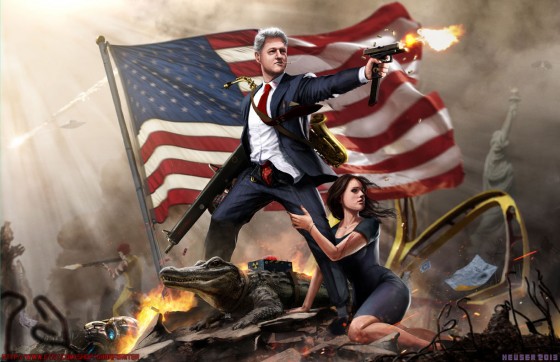 Billy didn’t make the list, but we had to include this image.

There are certain perks included when you become a United States President. You get to meet your favorite sports heroes, pose for some sweet paintings, and if you’re really great they might even put your face on some cash. 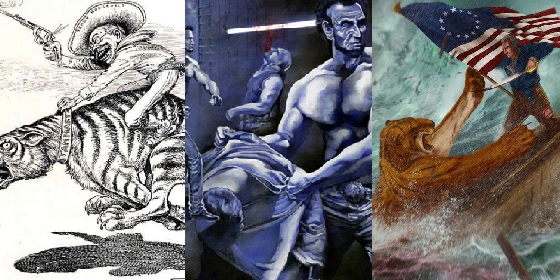 However, the role itself carries some major responsibilities too. You’re in charge when aliens attack, you have access to nuclear launch codes, and your legacy will last the ages. Let’s take a look at some legends of a presidential variety, to see what these men were up to between chapters of the history books: 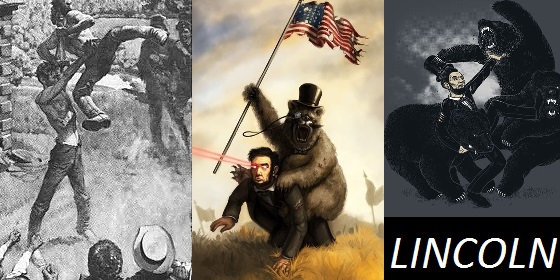 The Legend: Lincoln lifted a hooligan off of his feet, choking him out.

There is a tale from Lincoln’s younger days, that doesn’t quite fit the character we know from “Bill and Ted’s Excellent Adventure” and “Clone High”. Deep within that hat lies a beast just waiting to be let out.

While he was a clerk at a general store, a gang of hooligans ran afoul of the future President. I’m not saying that they made fun of him because he was tall and lanky, but that lurchy-looking guy behind the counter probably had it coming.

Legend has it that this verbal sparring turned into actual sparring, when Lincoln challenged the gang’s leader (ironically named Armstrong) to a wrestling match in front of the store. It was pretty even until Armstrong went for a cheap move out of desperation.

Young Lincoln didn’t tolerate shenanigans, so he raised his opponent off of the ground and choked him into submission. Once everything was over they shook hands like gentlemen, and the hooligans stopped giving Honest Abe a hard time. 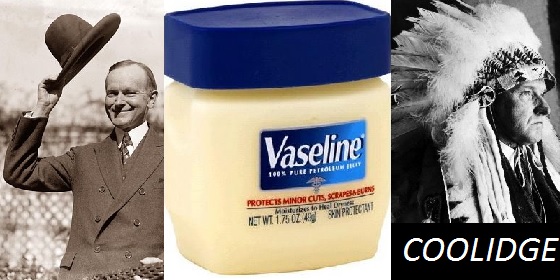 The Legend: Coolidge frequently enjoyed breakfast while having his head rubbed with Vaseline.

Calvin Coolidge doesn’t have a lot of points in the “epic legacy” column, but he certainly had some hedonistic tendencies. After reading more about him, we certainly think of the man in a different light.

Like many, Coolidge enjoyed breakfast in bed (usually pancakes). Unlike many, he liked to kick things up a notch by getting a Vaseline scalp massage at the same time. Let that mental image sink in for a moment.

I’ll admit that I enjoy washing my hair as much as a girl in an Herbal Essences commercial, but there’s something about Coolidge’s lubrication needs which make me feel gritty. Add in the fact that he liked to play the harmonica too, and you have a leader that is hard to take seriously over waffles. 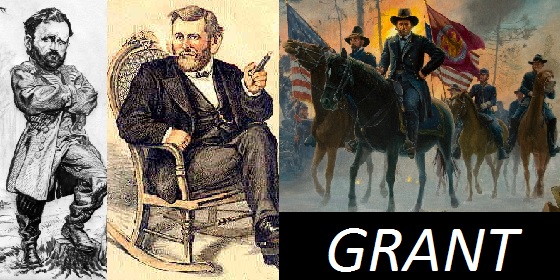 The Legend: Grant was given a ticket for bringing a horse to reckless speeds in the city streets.

By all accounts, Ulysses S. Grant was a tough man. He consumed an average of twenty cigars a day (half chewed, half smoked), had an impressive military record, and a beard of considerable merit.

However, Grant had a bit of a wild side as well. While he was in office, he was frequently seen riding through the streets with little regard for anyone around him. Once he got a speeding ticket for driving his horse-drawn carriage irresponsibly fast. It’s hard to say exactly how fast that is, although I imagine he was one harsh corner away from tipping over. Sure, it isn’t the wildest story you’ll ever hear, but the mental image is pretty grand.

Legend says the officer wanted to rip up the ticket although Grant refused. Better legends say that Grant rolled a cigar out of the ticket, lit it with a match struck against his own beard, and threw cash at the officer as he continued on his way. 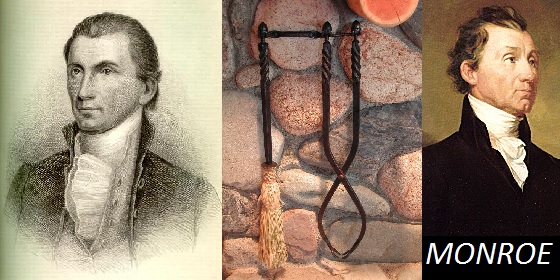 The Legend: Monroe chased one of his own staff members out of the oval office with a set of fire tongs.

During a debate with the Secretary of the Treasury, Monroe found the man advancing upon him with his cane raised in a threatening manner. Remember in these days, the cane wasn’t only a tool used by the elderly and pimps, but a gentleman’s walking stick which could easily be adapted into a baton.

Instead of calling guards into the room, Monroe calmly made his way to the fireplace and picked up a set of fire tongs. With a darkness in his eyes, he assumed the stance internationally understood as “Alright punk, let’s dance”. The maneuver worked, and the secretary ran out of the room showing us all that Monroe did at least one thing worth remembering during his presidency. 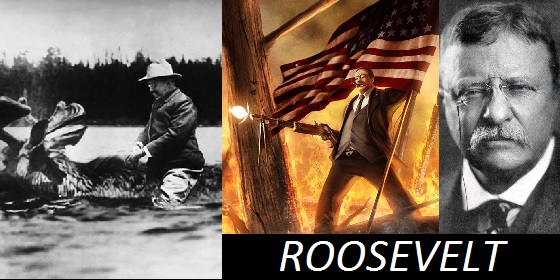 The Legend: Roosevelt stabbed a cougar to death with a knife.

Roosevelt was a notorious man, and his various acts of testoster-tude are well documented. One of the craziest tales about him was outlined in a letter he wrote his family. The exact text was dry, so we’ve taken the liberty of paraphrasing it here:

Allow me to tell you a tale. I was out hunting with a man named Goff, climbing the types of hills that horses shouldn’t, and showing some lynxes who’s boss (me). Eventually my true prey was in sight, a filthy mountain lion.

I could have shot him (Tony climbed up a tree after him and fell, stupid Tony), but instead we waited for a good photo-op. This provided opportunity for an escape, but the dogs tracked it down and gave it a good beat-down.

I started getting worried about injuries (to the dogs, screw the cat), so I ran in and mercifully stabbed the mountain lion with that knife you loaned me. I always wanted to kill a cougar this way, so I’m pretty stoked about the whole thing. I hope you don’t expect me to clean the knife.

Your Father and President 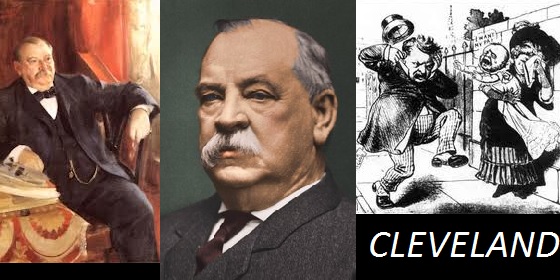 The Legend: Cleveland tried to cover up an illegitimate son by having the mother committed.

With actions which the Sesame Street character of the same name would not approve of, Grover Cleveland is attached to one of the most nefarious sexual scandals of any US President. It didn’t happen while he was in office, which just makes you wonder how much he could have gotten away with if he was President at the time.

The way the story goes, Cleveland persistently asked a young lady named Maria Halpin out for dinner. After her reluctant acceptance he sexually assaulted her, leaving with threats if she went public. She gave birth to a son about nine months later, who Cleveland had placed in an orphanage after having Halpin committed.

Later it was determined that Halpin was sane after all, so she was released from the asylum. To prevent Cleveland’s image from being tarnished by an illegitimate child, it was noted that Halpin was a woman of loose morals so the child could belong to anyone. Stay classy there Grover, and make sure you avoid coming in contact with holy water you demon bastard. 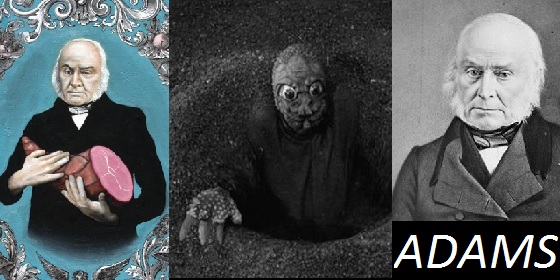 The Legend: Adams almost funded an expedition to the North Pole to open up trade routes with the mole people.

John Quincy Adams did a lot of great things as President (I imagine), although he may have set his sights a little too high when it came to trade route negotiations. The topic has fascinated other men, which explains why George Lucas used it as the background plot for The Phantom Menace.

To provide a little context, Adams was a fan of the theory that the Earth was a candy shell with a hollow interior. What did he expect to find inside this giant Kinder Surprise? Mole people hoarding their riches of course.

John Quincy Adams went as far as plotting an expedition to the North Pole, so that Americans could introduce themselves to the glorious mole people and trade for their wealth. That or rob them blind, which would be fairly simple as they can’t see well in daylight. 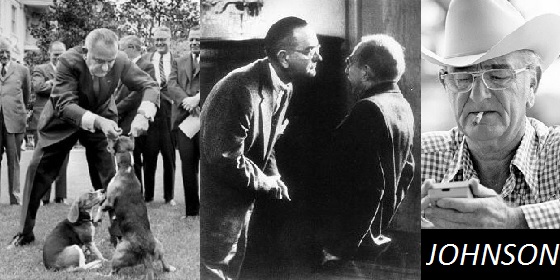 The Legend: Johnson (snicker) once urinated on one of his own secret service agents.

President Johnson was a big man with a lot of personality. He got in your face when he needed to, and liked using power plays to bend people to his will. Simply put, LBJ was the “I don’t give a fuck” President. Yes, even more than Clinton.

He frequently belched, spat, scratched himself, and even used the bathroom while discussing matters in his office, but his not-so-graceful coup-de-grace was urinating on one of his own secret service agents.

When noticing the man’s surprise, LBJ simply said “That’s all right, son. It’s my prerogative”. It takes real power to address public urination concerns the way Bobby Brown would, without any repercussions. 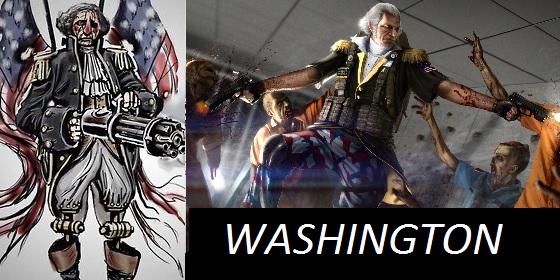 The Legend: Washington rode three different horses in one battle, because the first two were shot.

During a battle he entered as Assistant General, Washington’s commanding officer was gunned down. With no one else “qualified” to take control, George leapt onto a mighty steed and took over the reigns of battle. The horse was shot from beneath him almost immediately.

He didn’t interpret this as a sign or anything, so he got up and set his sights upon another free horse. Despite the panic in the horse’s eyes, Washington successfully mounted the beast. Sadly, history was forced to repeat itself as this second steed was swiftly cast aside… with bullets.

Someone did not want Washington to ride a horse that day, but he just didn’t care. Proving his complete disregard for equestrian life, he jumped onto a third horse and continued to lead his troops without any more problems. 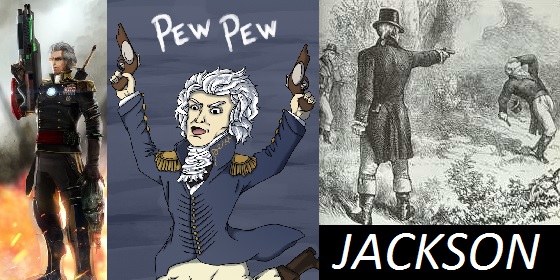 The Legend: Two pistols mis-fired against Jackson during an assassination attempt.

In what some refer to as the first assassination attempt on a sitting President (war doesn’t count), an unemployed Englishman plotted to kill Jackson believing it would help the economy.

Lawrence, the aforementioned assassineer, waited outside of a political funeral and pulled a pistol upon Jackson which mis-fired. Lawrence twisted his mustache and uttered: “Ah, do not lull yourself into a false sense of security Mr. President. I have another trick up my sleeve!”

A second gun was pulled, which also mis-fired. As rumor has it, Lawrence was held down by those in attendance (such as famed raccoon wearer Davy Crockett) while Jackson mercilessly beat him with his cane.

After his arrest, Lawrence revealed that he was actually Richard the Third and kind of a big deal. This claim could not be verified, as those around during his reign had been dead for several hundreds of years.

The craziest part of this event, other than Lawrence himself, was the fact that the pistols were later tested and fired without any issues.