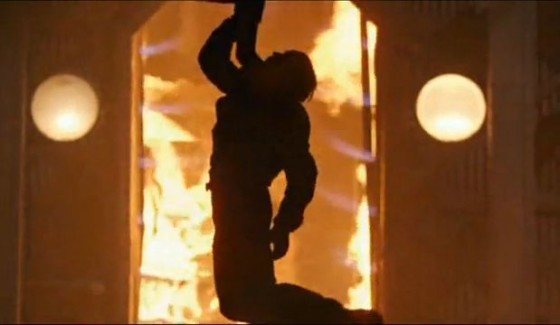 Watch enough flicks and you’ll see a plethora of ways to kill human beings. Burnings, shootings, decapitation, evisceration, viruses, to name just a few. One of my favorite methods is death by impalement. Nothing tickles my toes like a large, pointy object plunging into some poor bastard’s abdomen or chest. Here are ten of the very best.

I’m pretty sure every Ah-nuld movie contains a bloody impalement, but I’m partial to this one from the awesomely awful Commando. Bad guy, meet steam pipe.

Man, it sucks Bruce Lee didn’t live longer. I’d wager the guy would still be kicking ass today at age 61. Ah, what could’ve been. In the following scene, Bruce unloads a foot of fury, much to the dismay of Han.

Renard
The World Is Not Enough

Despite the presence of the gorgeous Sophie Marceau and the always solid Robert Carlyle, this 007 entry sucked ass. Denise Richards as a nuclear physicist? That’s ridiculous even by Bond standards. Nevertheless, it does boast a fantastic impalement.

Okay, technically, this isn’t an impalement. Well, it kinda sorta is, although I’d classify it as more of a crushing. Whatever you call it, Cyrus gets his melon flattened like a pancake.

I’ve never been a proponent of vampires turning into wolves. Let’s keep our creatures of the night separate, shall we. I digress. Peter Vincent ain’t about to let some amateur bloodsucker get the jump on him in the one and only Fright Night.

It’s been well documented on the interwebs that Sean Bean never seems to make it to the end credits breathing. For whatever reason, writers and directors love killing him off, often in brutal fashion. Here’s a sterling example.

Don’t f*ck with a dude named Marion. It’s obvious Mr. Cobretti carries a ton of latent anger over his girlish moniker. That’s bad news for serial killers like the Night Slasher. He’s the disease, Marion is the cure.

Peyton Flanders
The Hand that Rocks the Cradle

I forgot, a) how hot Rebecca De Mornay was twenty years ago, and b) how creepy her blue eyes are. Stealing another chick’s baby isn’t sane behavior, but Peyton gets her comeuppance via a white picket fence. How symbolic.

This flick might be 35 years old, but it still scares the feces out of me. Spawn of the Devil are not to be trusted. Especially ones named Damien. Father Brennan learns this the hard way. It’s a real ouchy.

I don’t care what some of the Firefly nerds say, Serenity is a badass movie. It’s got action, laughs and a cold-blooded villain. It also features the untimely demise of one of my all-time favorite fictional characters. “I’m a leaf on the wind…”