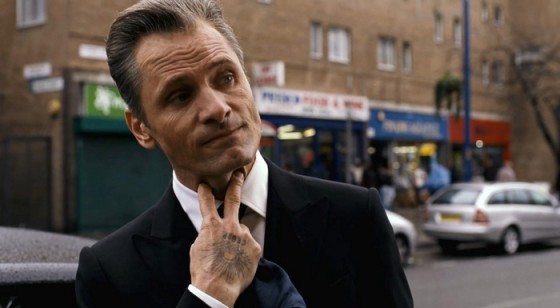 In the 100-plus years of cinema there have been scores of tough guys. James Cagney, John Wayne, Clint Eastwood and Bruce Willis have all written chapters in the book of hard-boiled. Be it cowboys, cops, or criminals, the list of big screen bruisers is long and distinguished. It would be impossible to narrow it down to the very best. Everyone has their favorites. The following ten roughnecks are by no means the best of the best, but they more than hold their own in the taking it and dishing it out department.

This was the movie that put Colin Farrell on the map. Farrell plays Private Roland Bozz, an anti-authority Vietnam era Army recruit who refuses to adhere to military rules and regulations. Not only does Bozz stand up to his superiors, but he also defends those incapable of defending themselves. Like any good tough guy, Bozz marches to the beat of his own drum.

Vinnie Jones, who plays Big Chris, is an ex-footballer, so you know he’s tough. If you owe money, you better hope Big Chris isn’t the one sent to collect the debt. He doesn’t take kindly to welchers and whatever you do, don’t use foul language in front of his son.

Need an undercover cop to defuse a nuclear bomb being held by a powerful gangster? Then Captain Damien Tomaso is your man. He’s a crack shot, deadly martial artist and proficient in parkour. He pretty much kicks ass in every was possible. Double-crossing him is not advisable.

There’s something about the Russian mafia that screams tough. Nikolai looks and acts the part of a mob enforcer: tons of tattoos, steely glare and an overly calm demeanor. Nikolai takes no prisoners when it comes to hand-to-hand combat. Even when fighting in the nude.

A mentally unstable ex-CIA operative might not be the best choice to babysit a precocious little girl, but John Creasy is a lovable brute. Well, that is until money-hungry kidnappers swipe the little girl in question. Then Creasy turns from teddy bear to grizzly bear. Slicing off fingers and planting bombs in rectums are just some of his favorite pastimes.

Man, Mickey Rourke played some great characters during the ’80s. None better than Stanley White, the no holds barred cop put in charge to clean up the drug infested streets of New York City’s Chinatown. White doesn’t follow the book, he writes his own. His one-man crusade to topple kingpin Joey Tai is one for the ages.

Vin Diesel launched his career playing the badass convict with night vision peepers. Riddick is the definition of tough: selfish, arrogant and fearless. He doesn’t have time to weep for the dead. He’s too busy ripping innards out of alien beasties. It’s best not to eff with Riddick, unless you like dying a painful death.

Nobody does tough guys quite like Mickey Rourke. Sin Cityis chock-full of cool characters, but Marv stands out from the lot. Square-jawed and scarred, he looks like a punchdrunk palooka from the 1920s. It’s a good idea not to get in Marv’s way when he’s on a mission. He’s liable to stomp a hole in your face.

Not since the glory days of Sean Connery have we been treated to such a rough and tumble 007. Daniel Craig adds a much-needed ruthlessness to the role of Bond. He literally runs through walls in Casino Royale to bag the bad guy. His boss refers to him as a blunt instrument. That’s being kind. He’s a battering ram who can endure some serious pain.

Yield to King Xerxes? What were the Persians thinking? Spartan Kings bow down to no one. Leonidas is the ultimate tough guy. He sacrifices himself for a cause bigger than himself. In doing so, he becomes a legend. He also has the balls to pit 300 guys against a million-man army. That’s how you get the rep as the biggest, baddest soldiers in history.