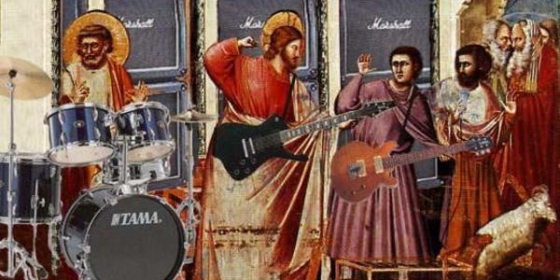 Strictly speaking, we here at Gunaxin don’t swim into the Religious end of the pool for various reasons. Okay, maybe around Christmas time, but those waters can contain sharks and we’d rather not get bitten. However, outside of the holiday, there is one way to get a little bit of The Son even if you aren’t a staunch Christian, or, conversely, if you are (this author is, but that’s seriously neither here nor there). Anyway, modern rock has found a way to shoehorn Jesus in on a few occasions, and it’s those tunes we’d like to look at here.

Some Info: Lead singer Gordon Gano is a devout Christian, yet despite this, most fans assumed that this song, and many others featuring religious themes, were done as gags on the Hallowed Ground album. Though the other two band members are Athiest, they allowed the songs regardless.

Wooden Jesus : Temple of the Dog

Some Info: Not much, other than it, plus all the other songs, were written by Chris Cornell and all were decidedly more melodic than Soundgarden’s music from Louder Than Love.

Some info: “Jesus Christ Pose” was written about famous people who exploit the symbol of Jesus’ crucifixion as to suggest that they’re persecuted by the public. (Wiki)

Some info: In 1960’s slang, the term ‘alright’ meant good or cool, and in no way does this mean that Jesus is, well, OK. This version is based entirely on The Byrd’s version with a few added musical bits here and there.

Some info: Although “Jesus Just Left Chicago” isn’t exactly a hymn, it does have a spiritual dimension, and is written more in the style of Black Christian music, adhering to a strict blues format.

Some info: According to Martin Gore, “It’s a song about being a Jesus for somebody else, someone to give you hope and care. It’s about how Elvis Presley was her man and her mentor and how often that happens in love relationships; how everybody’s heart is like a god in some way, and that’s not a very balanced view of someone, is it?”

Some info: The lyrics tell part of the story of Jesus of Nazareth. Mercury, credited with writing the song, was a Parsi Zoroastrian.

When you were Young : The Killers

(Jesus isn’t in the title, but He plays heavily in the song)

Some info: The song, which is in the key of B major and written in common time, displays the band’s move towards a more “heartland rock” style, as it is part of an album that was supposedly heavily influenced by the music of Bruce Springsteen. The song itself was reportedly influenced by Springsteen’s “Born to Run” and “Thunder Road”. (Wiki)

(Much like the above tune, no Jesus in the title, but boy is He mentioned throughout)

Some info: In the documentary “Dark Secrets: The Stories of Rubberneck”, singer Vaden Lewis further elaborates that he intended “Possum Kingdom” to be a continuation of the story told in the song “I Burn”. While he envisioned “I Burn” to be a story about cult members immolating themselves in order to ascend to a higher plane. (Wiki)

(Finally, though Jesus is not, yet again, in the title, Tool reminds you that He is, most certainly, in the song)

Some info: The song, written in 1987, was originally titled Burn About Out.