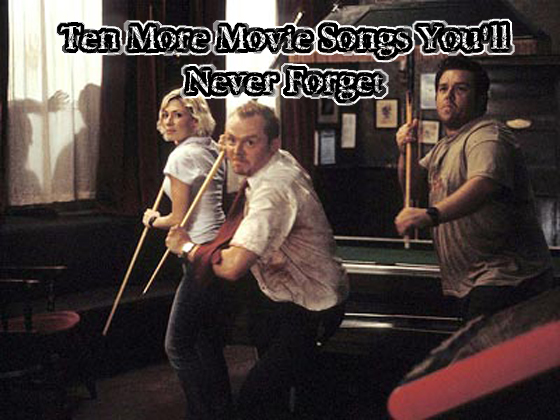 A few weeks ago, we here at Gunaxin came up with a list that showcased ten songs featured in movies that stood out as the very reasons why said films have become completely unforgettable. Well, since it was by no means a definitive list, more have been discovered, and we think these might even be better than the first batch!

So what’s the criteria for making a list like this? Well, first off, these aren’t tunes that are just considered part of the movie’s score. They don’t get played as background music throughout the flick, and they typically only appear once in one pivotal scene that kind of skews the direction of the entire story, or else makes a character or even a few find a new path to take. They are often times the very reasons we remember these movies as well as we do. So, check out Ten More Movie Songs you’ll never forget!

Quite possibly the most homo-erotically driven film hidden in a military jet flick ever made starring Tom Cruise. Or anyone. However, this scene plays it straight as Maverick and Goose do double duty vying for Charlie’s desires. Wait, that whole sentence just sounded… um.

Let’s say you skip school one day. Chances are pretty good that you’re gonna have your teacher and then your principal calling every phone you own trying to lasso your ass. But chances are you aren’t Ferris Bueller. Because he can get away with anything, up to and including crashing a parade and commandeering a float just so he can lip-synch to the Beatles. Oh yea (chick… chicka chicka).

Okay, we can all agree that this might not be the greatest ensemble piece ever featuring Martin, Short and Chase, but it sure is stupidly funny. The scene in question shows the fear that Bottoms, Day, and Nederlander bring to a Mexican saloon just because they’re mistaken for some Germans. I suppose if you were confused with a Nazi, you could probably get some freaked out Hispanics to dance to”My Little Buttercup” too.

Two songs really stand out in this movie, only because they’re both pretty sharp turning points in the life of Napoleon Dynamite. The first is represented here, in dance. Napoleon sucks it up and dances in front of the entire school, much to both the appreciation (and chagrin) of his classmates. It’s the song “Canned Heat” by Jamiroquai. The other song is the end scene featuring a tether-ball game with “The Promise” by When in Rome in the background.

Planes, Trains, and Automobiles
The Mess Around

Ah, John Candy. You almost never steered us wrong. And one of your absolute classic movies is definitely Planes, Trains, and Automobiles with the just-as-perfect Steve Martin (again, even!). Much of this road picture takes place in a rapidly crumbling car, including this scene just before the real wad of shit hits the fan. Candy singing along with Ray Charles? Yes, please!

American Psycho
Hip to be Square

Badness just gets rolling when Bateman watches The Texas Chainsaw Massacre while he’s working out. It’s just the beginning. Taken from Bret Easton Ellis’ novel of the same name, Bateman is the true definition of the word psychopath and only proves the point stronger by chopping the hell out of Jared Leto’s Paul Allen to Huey Lewis and the News.

Here we have the first of two Tim Burton classics (Yes, for those of you who didn’t know, this was directed by Burton) and it’s a absolutely iconic dance scene. Basically, Pee-Wee stumbles into a bar, walks into trouble, and spares his life with a last wish to… dance on a counter in high boots? Yep. That’s the gist. Sadly, he nearly ends it all again by dominoing the bikes in the parking lot. You’ll never forget “Tequila” by The Champs.

Shaun of the Dead
Don’t Stop Me Now

Hands down the greatest horror spoof of all time. Why? Because it absolutely lampoons George Romero to a ‘T’ without flinging shit at him. It’s an homage and a tongue-in-cheek at the same time. Anyway (let me climb off my soap box) the scene in the Winchester when they discover the owner zombified and try, quite pointlessly, to kill him via in-beat pool cue whacks is to the tune of Queen’s “Don’t Stop Me Now.” Classic. “Somebody kill the queen!”

Beetlejuice
Jump in the Line

And here we have the second in Burton’s film career (literally) and his second on this list. Why? Because it’s completely insane and it, too, features two very important songs! Both of which are by Harry Belafonte, and the first in the flick is of course the one where the Maitlands attempt to scare away the Deetz family by having them all dance to “Day-O.” This one, however, is at the very end and is Lydia’s award for doing well in school. Again, it’s Belafonte and it’s called “Jump in the Line.” “Hey, this could be a good look for me.”