Ten More Movie/TV Bunnies To Chew On This Easter 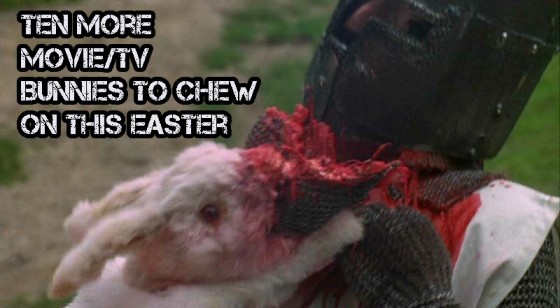 Last Easter we featured our list of the Ten Best Movie Bunnies. Well, we’re back this year to celebrate even more wascally wabbits from the world of film and television. Why? Because we just can’t get enough of the fuzzy little bastards. So, without further ado, here is another basket of delicious bunny treats to chew on. 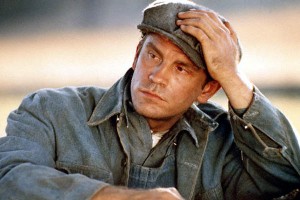 Poor, dumb Lennie wouldn’t shut up about those damn rabbits he wanted to tend. Too bad he strangles a chick to death or his dream might have come true. Instead, best pal George fires a bullet into his dome. 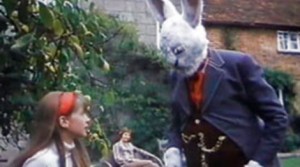 I saw this bizarre British children’s flick on PBS when I was a wee boy. It has something to do with a talking, invisible rabbit befriending a little girl. In a word: creepy. That’s all I remember. 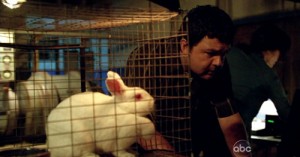 Rabbits frequently pop up throughout Lost‘s six compelling, yet confusing seasons. The first one appeared in the season three episode “Every Man for Himself.” Ben uses it to screw with Sawyer and reference the novel Of Mice and Men. 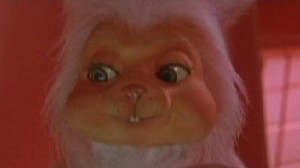 This freaky Easter Bunny is part of Ted “Theodore” Logan’s personal Hell. It has a very child molester-like look, which seems appropriate. The idea of a giant rabbit hiding baskets of candy in children’s houses always struck me as incredibly wrong. 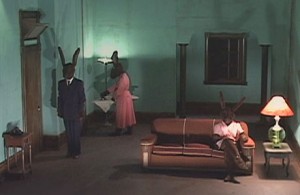 Leave it to David Lynch to conjure up an incomprehensible motif involving a weird family of hares to go along with the cryptic plot of Inland Empire. Your guess is as good as mine what their unsettling utterances mean. Maybe I’ll drop acid the next time I watch. Sure as hell couldn’t hurt.

The White Rabbit Tattoo
The Matrix 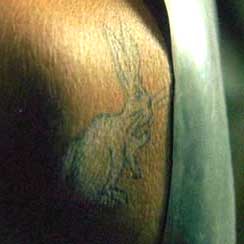 The numerous allusions to Alice in Wonderland embedded within the story of The Matrix are plain to see. The most obvious being Neo’s decision to “follow the white rabbit,” which sets him on his journey to become The One. 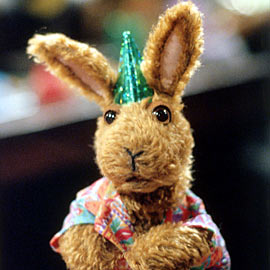 If you’ve never seen this hilarious Fox/IFC series, well, you need to. It combines elements of South Park, The Simpsons and Robot Chicken. Greg is a hapless wannabe actor and repeat target of “friend” Warren the Ape’s jokes and schemes.

No list of movie bunnies is complete without this victim of Glenn Close’s psycho bitch antics. The minute that boiling pot appears on screen, it’s pretty easy to figure out what comes next. And it ain’t good news for Peter Cottontail. 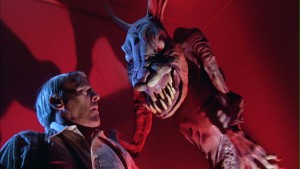 I’m still puzzled why this bunny doesn’t get more love. I mean, look at the damn thing. It’s a  monster. I nearly pissed myself when Uncle Walt pulled fluffy out of his hat, only to have it transform into a demon spawn with nasty, pointy teeth. 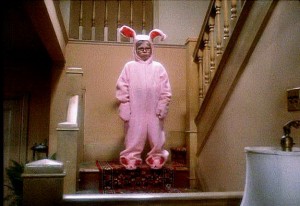 Ralphie’s old man calls it a “deranged Easter Bunny” and a “pink nightmare.” He’s right on both accounts. The sight of it makes me cringe every time I watch this Christmas classic. I’d like to believe the old man set fire to it to save his son the embarrassment of having to wear it again.