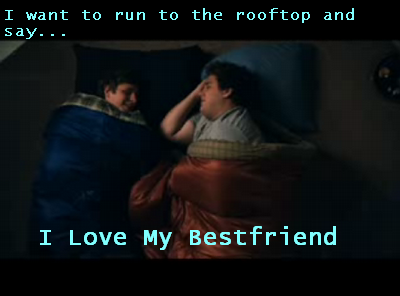 What the hell is a bromance? Well, it’s a fake word, that’s what. Seriously though, it’s a combination of two words (a portmanteau, if you will) that stand for a ‘brotherly’ (two dudes) ‘romance’ (who love each other nearly to the point of being exceedingly gay). Now bromance in cinema is a glorious thing to behold. If you’re a guy hanging out with your girl and you know the movie you’re seeing is going to be pretty cool -at least for you- the chances of her liking it drop exponentially. Then you toss in the bromance and everyone can concede to loving it equally. Isn’t that nice? Sure it is. There’s nothing more emasculating than identifying with the two fellas on the screen in front of you as they share tender moments, hug it out, and even show -GASP- shitloads of gooey, sloppy emotion. Yeah, yeah, manly men can do that creepy ass crap, too. So sit back and check out a ten-spot of the most bromatic flicks around. 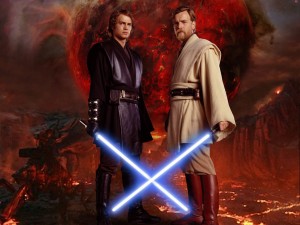 It sure didn’t look like it from the mind-numbingly hideous Phantom Menace, but Little Ani and big-bro Obi Wan sure do strike up an overtly close-knit and touchy-feely bromance. Oh sure, the point was to take over the training of Anakin after Qui-Gon got his Jedi ass kicked by Darth Maul, but what ultimately grew was a giant manly penis of buddy-buddy angst and hidden lust that even a change to the Dark Side couldn’t easily pry apart. Obi Wan loved him some Anakin, and the student, in turn, had a sweet little affectionate smile for the master. Oh yeah. 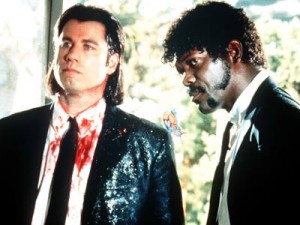 When so many moments of bromantic closeness are shared, it’s hard not to find that heated connection between to trained killers. First, after an action packed moment of biblical proportions when the two witness the miraculous missing of six aimed bullets, to the utter coating of blood and brain mater after a careless gun shot decapitates a victim; you just know that times like those tend to bring a duo closer together. But what finally seals the deal is a community hose-shower and a delightful breakfast at a diner complete with a near hostage situation. It’s all so beautiful.

Video is pretty damn NSFW, by the way.

The Lion King – Timon and Pumbaa 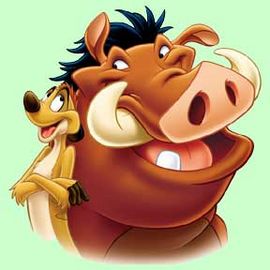 I don’t care if it is a cartoon and I certainly don’t care if it’s a shared and not-so-hidden love between a meerkat and warthog, the point is, these two fellas had a deep, strong affection for each other that was often only exposed in delightful chicanery and songs. ‘Hakuna Matata’ indeed! There was no doubt that the mammals had every intention of spending the rest of their lives with one another in bromantic unison, sharing the praises of ‘no worries’ and a carefree -woman free- existence. But they were all men, all the time. Just ignore the fact that the voices are both Broadway actors (Nathan Lane and Ernie Sabella.)

Butch Cassidy and the Sundance Kid – Butch and Sundance 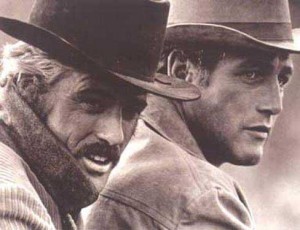 When you’re the combined leaders of The Hole in the Wall gang and do everything together, it’s hard not to be taken for something that you’re quite obviously not. After a series of failed attempts to rob and plunder, the two need to hide out in a brothel. Yeah, that’s right, not exactly the most uber-manly places to take up temporary solace. To no surprise, they’re exposed (not literally) and ride off, as a posse is hot on their asses, on one horse. Ooohhh, snuggly! Another moment, obviously under duress as the two are surrounded by a hundred Bolivians, really marks the bromantic link between the two as they discuss their final move to Australia. Do they make it? !Fuego! 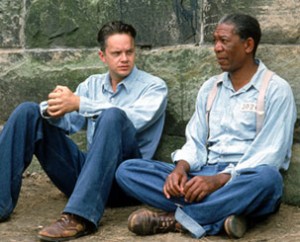 First of all, knitting together a close, undying friendship that can stand the test of time through bull-queers, shower rape, and warden punishment while surviving inside a prison can be a challenge. Well, sort of. This particular prison, Shawshank, is a smorgasbord of differing lifestyles, clicks, and little groups each striving to find its way within the confines of the clink’s concrete and iron walls. Leave it to Andy to be the one shining star; to be the one inmate who can help everyone experience hope while making fast friends. And leave it to Red to be the one fella who strikes up such a loving bromance as to even keep touch outside of the penitentiary blockade. It’s so precious, man! 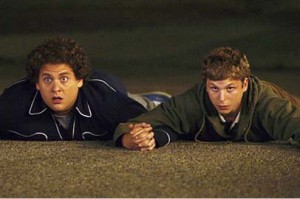 The boys are facing an unknown future. It’s senior year, it’s high school, and neither Evan nor Seth really want to leave the other. They have, over the course of the years, forged a bromantic bond so strong that they do, quite honestly, love each other and dread every aspect of having to separate from their wonderful, strictly platonic and straight, relationship. But after an evening of exploration into the true inner workings of a bromantic connection by either getting hammered, nearly arrested, or involved with a duo of completely bizarre cops, the penultimate discovery becomes that they really can’t spend any time away from each other. Love is in the air. Purely bromatic, though, trust me. 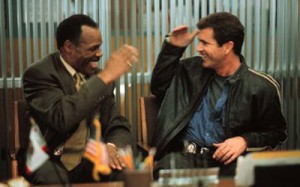 From the get go, from the very moment soon-to-be retired police officer Roger Murtaugh meets his mentally unstable and physically taxing new partner, Martin Riggs, you just somehow knew that the two would become as close as brothers but with the added benefit of a burly bromance. Soon, there’s family dinners, intermingling relationships, and a barrage of gunfire to literally seal their partnership. But, over all, despite the knowing glances after a messy fight in a muddy yard and the exchanged grins when they, once again, piss off their chief, it’s the beautiful moment shared when Murtaugh is stuck for hours on an explosive toilet. The fun, frolicking friendship manages to last a full four films. ‘F’-yeah. 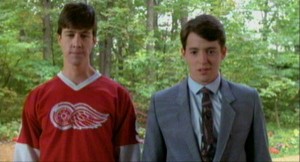 You’d think being the best friend of your high school’s most popular student would be something of an honor. Yet somehow, it’s almost as though it’s a taxing prospect for sad-sack, Cameron Frye. When Ferris calls his best bud to get his assistance in pulling off the single greatest ‘hooky’ attempt in school history, even Cameron’s legit illness can barely keep him away. Of course it takes all of Ferris’ charisma and persuasion to put all the gears into motion, but once it’s done, they (along with girlfriend Sloan Peterson) have the time of their lives. Even so, as Cameron stands idly by as Ferris and Sloan share something that even he and his best friend couldn’t really ever have, he comes to realize that their true bromantic relationship can even survive the death of a really expensive Ferrari. Makes you wanna cry a little.

I Love You, Man – Peter Klaven and Sydney Fife 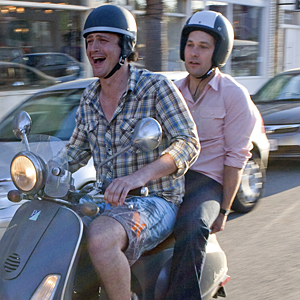 Peter is getting married. He is madly in love with his wife, and, somehow, more involved with every single one of her female friends and women co-workers, too. No, it’s not like that, but what it is like is Peter’s lack of any real guy friends. He’s dull, work-a-day, and just about as naive as you could imagine, and he needs a best man. The clock is ticking, the feeble attempts and worthless assistance from his gay brother are, well, worthless, and Peter just can’t seem to meet a nice guy. Until Sydney. Their eyes lock at one of Peter’s open houses (for the Hulk, Lou Ferrigno) and it’s all the opening they need. Soon, it’s date after date, boardwalk stroll after boardwalk stroll, and a bromantic link that only a universal love of Rush can provide. Yes, the atypical falling out is right there after a silly misunderstanding, but it’s the wedding scene (the one where Peter is actually marrying his fiancee) where they express their true love for one another. Oh yeah. 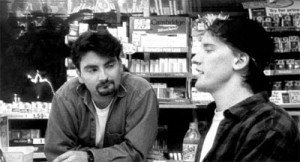 He wasn’t, as was so often decreed, not even supposed to be there. But Dante, the clerk at the Quick Stop, had to spend his day off in the ninth circle of hell. Well, at the very least, it was with his best friend-come-shoulder devil, Randal who manned the neighboring video store. No, not really much of saving grace, but it did make for one bromantic turn of events. From the door being gummed shut, to the constant shooing of drug peddlers, Jay and Silent Bob, to a mishap at a wake, to a blown hockey game on the store’s roof, to a love-life disaster between Dante, Veronica, and Caitlin, to the death of a masturbating patron… and that’s barely half the day. It is a day that will never end, but through it all, even after a snack food fight, Dante and Randal begin to understand just what they mean to each other. But soon, a few years later, the two share employment at the Mooby’s fast food place (see, Randal burns down the Quick Stop), and they manage to get into a similar situation: Dante does not really love his fiancee, but rather his boss, and Randal just chooses to be the monkey wrench in the works. Eventually, after a donkey show goes horribly awry (seriously), they end up in jail where Randal spouts quite possibly one of cinema’s finest bromantic diatribes of all time. Yeah, they love each other.

Another NSFW video. For those of you who are at ‘W’.