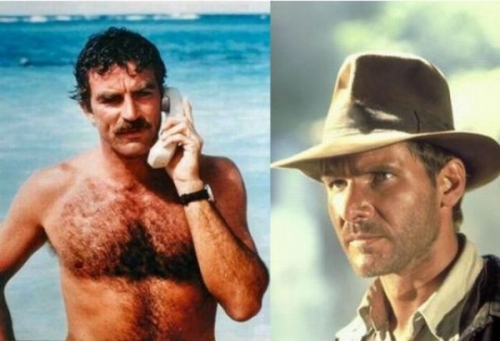 It’s amazing to think about how the fates have to align to get a movie made in Hollywood, let alone all the things that can go wrong even after a project gets greenlit. One of the most important, of course, is casting.

There have been many coveted roles in the history of cinema that many an actor has passed over and regretted later. Yet sometimes it’s the choice to pass on a project that makes all the difference, both for the actors involved and for the audience watching in theaters.

In that vein, here’s ten movie “thank you but no thank you’s” we think had a particularly significant impact, not only for the end product of the film in question but for the careers of the actors who were up for the roles.

Yes, Die Hard on a bus nearly went to the homeless man’s Johnny Depp from 21 Jump Street. Fortunately, Grieco chose Mobsters instead and his career went on to die a quiet, painless, nobody realizes it for three weeks kind of  death. But not before he managed to submit one of the worst spinoffs in TV history. Oh, Booker…

Sean Connery as Gandalf in The Lord of the Rings

Can you picture Connery’s crotchety, half snarling Scottish accent and glowering expressions raining over poor Frodo? Had Connery been cast it could have jeopardized one of the most glorious trilogies to ever grace the screen.

Word is that prior to getting the script that Connery hadn’t read any of Tolkein’s books and that he repeatedly referred to hobbits as ‘bobbits.’ Furthermore, it’s our feeling had he taken the role he would have channeled his medieval acting experience from First Knight and Dragonheart into his characterization of the white wizard. This would have been a very, very (did we say very?) bad thing, indeed.

Will Smith as Neo in The Matrix

Will Smith, the king of overacting, passed on the role that ironically went to one of the most expressionless actors of our generation, Mr. Keanu Reeves. In the end, that understated quality probably worked better for the role than Smith’s over the top antics would have.

The one upside  had Smith taken the role and the film flopped: we wouldn’t have to sit through the abominations that were the second and third acts of the trilogy.

This isn’t a knock on Norton as much as it is a triumph by Christian Bale in how he owned the insane, disturbed serial killer. In what turned out to be a star-making performance, Bale carried an otherwise mediocre film on his back and vaulted himself  to A-list status. Hope he sent Norton some flowers for the opportunity.

Wow, talk about going in a different direction. Had Rourke accepted this role an entire generation of movie watching fans would’ve been deprived of one of the most iconic characters of the ’80s.

The really striking thing about Rourke being cast first is that we realize how much of that script must have changed based on Murphy’s presence, or vastly improved.

Oh, if only Eddie Murphy could still make funny movies.

Nicholas Cage as Randy “The Ram” Robinson in The Wrestler

Rourke appears on this list again, this time as the beneficiary of Nic Cage’s decision to pass on the character study of a beaten down former pro wrestler. Just as with Bale, Rourke really owned this role to the point you simply wouldn’t be able to picture another actor who could have delivered the performance. Also, Cage would’ve made a pretty scrawny pro wrestler.

Quite honestly we couldn’t care less about whether or not Titanic succeeded at the box office or otherwise. However, we recognize this was the movie that was that launched Leonardo DiCaprio into the stratosphere. Who’s to say if we would have gotten the same version of Catch Me if You Can, The Departed or Inception had Leo’s career not taken off.

Although, picturing Wooderson from Dazed and Confused in the romantic epic of a generation is pretty damn hilarious.

Costner passed on this role, choosing instead  the ill-fated Waterworld. Ever since that decision, his career has become a punchline for bad choices and underachieving films. Curse of the Shawshank anyone? Either way, we’re glad he wasn’t there to ruin a classic.

Tom Selleck as Indiana Jones in Raiders of the Lost Ark

Steven Spielberg’s top choice was always Harrison Ford, but George Lucas had other ideas (he always does, much to the chagrin of his fans). In fact, Selleck had actually won the role and wanted to do it before a scheduling conflict with Magnum P.I. forced him to drop out. It’s possible Selleck could’ve been a serviceable Indie… but only if he shaved that mustache.

Probably the greatest save on this list was Reynolds’ choice to pass up Han Solo (we’re not even going to explore the mysteries of why he was considered in the first place). Harrison Ford jumped at the chance and the rest is history. Fanboys (and girls) everywhere should be sending cash donations to the Smokey and the Bandit star for sparing us from having to live in a world where the original three Star Wars films were as bad as the prequels.

Frankly, we have no interest in showing you a clip of Burt Reynolds’ acting abilities, so since we just touched on the topic of Magnum P.I. and Harrison Ford, check out this re-imagining of the two mashed together.