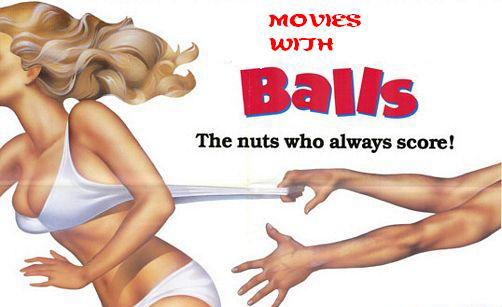 No, it’s not that kind of movie! The idea is simple. Movies with the word “ball(s)” in the title. See, now you’re happy about this, right? Let’s continue.

The 1979 summer camp classic. It proved that summer camp is all about fun and mischief before the kid with the hockey mask showed up and ruined it all. Hard to believe this thing spawned three sequels. They were all horrible.

Let’s stick with the summer camp theme and head over to Camp Bottom Out, where the new owner (Foster Brooks in his drunken glory) finds himself surrounded by some of the worst juvenile delinquents in the world. Oddballs uses the Airplane! philosophy of throwing jokes non-stop. Some of them are bound to stick.

Now it’s time to change it up with the singular use of the word “balls” and add a little horror to boot.

Regardless of hot Asian girls playing ping pong, this movie deserves much praise for the performance of the incredible Christopher Walken. Enjoy it. I will.

Since we’re already in the land of sports, let’s continue with that theme. After all, aren’t there a lot of sports played with balls?

This is a good one because it combines two balls in one (pun intended). Plus, it’s funnier than most episodes of South Park.

If it’s about bowling it must be a horror movie.

Sex, drugs and rock and roll. What could be better? How about acres of bikini clad babes at the beach? I thought you’d say that.

I saved this one for last because, with the exception of Meatballs, this is my favorite. It’s a raunchy teen comedy in the vein of Porky’s with some weird shit going on. Severin Films just released this in a new edition and by looking at the trailer you can see that it is one sweet flick.

There you are. A set of flicks with a real set of…balls.