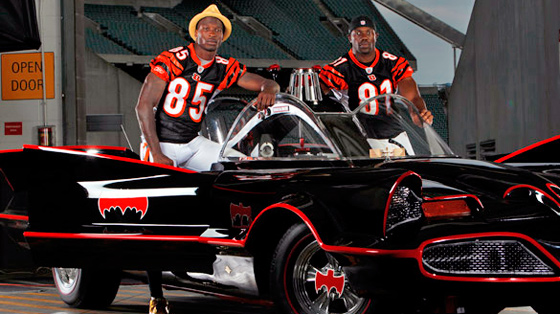 Comedy and sports don’t always go together, but when they are randomly intertwined it is a beautiful thing. There is hardly anything more respectable in my eyes than a guy who can ball out and show his athletic prowess one moment and put on a stand up-worthy interview the next.

These are ten of the naturally funniest athletes in sports as of right now, so sorry Shaq, former athletes are excluded. You’ll also notice that Chad Ochocinco didn’t make this list. I enjoy Chad’s off-field antics and think it’s a great thing for football, but is he naturally funny? To some extent, but he didn’t quite make the top ten. You will see an appearance from him though.

Here are ten guys that will keep you entertained all day, 21 hours of which may be away from their respective sports. Video evidence of their hilarity is included.

Although Bissonette isn’t a star in the NHL, he is easily the most entertaining on twitter. Ask almost anyone familiar with athletes on twitter and they’ll tell you that he is a must follow if you want a comedic presence on your timeline. The video below is mainly a chill interview, but remember he’s a hockey player, which is, like, worth double.

Dwight is one of the more laid back stars in the NBA, but his goofiness often translates into impeccable comedic timing. Watch below as he impersonates head coach Stan Van Gundy in an unflattering manner. He sounds like a cartoon character but I can’t put my finger on it…

He’s only been in the league for one season, but already Butler’s charisma has been noticed and his voice has been heard. Watch the two videos below to see the second best coach impersonation and the rookie hustling Chad Ochocinco. Is that an Eddie Murphy voice at the beginning?

The all-star pitcher is known on twitter as one of the more eloquent and clever athletes. He does all sorts of off the wall stuff with fans and media alike in person as well. An avid fan of the TV show LOST, Wilson was given the opportunity to do some “high-level” fitness with the creator Carlton Cuse. Oh, he plays Halo with Josh Hamilton as well.

Artest is in the category with Ochocinco where he often goes all out, but I sense more of a natural carefree attitude from Ron Ron in most of his stunts. Here’s an interview he did with Jimmy Kimmel. In his boxers.

Collison is another athlete who has become well-known for his twitter hilarity. One of the wittiest guys in sports. He had a classic argument with radio host Jim Traber, after Traber called him out for ragging on Oklahoma City, when really he was just enjoying the weather in Seattle. The whole debate is pretty ridiculous but Collison keeps his cool.

His recent sprint and slide into the mound at the All-Star game in Arizona gathered a lot of attention, but that wasn’t a new thing for the closer. He buys nerf guns for his kids, but he wants to use them more than they do. Here’s an interview he did where he misinterprets the reporter’s news of Cameron Maybin’s injury.

Possibly even more laid back than Dwight Howard, but maybe that’s just his calm and constructive leadership. He’s done all sorts of skits and commercials, but here’s a hilarious self-deprecating halftime interview from the Canadian.

His mullet obsession came to an end when he got married, but the hunter and party spirit never went anywhere. Allen is a devoted wildlife hunter, and tries his hand at using a bow and arrow to down a bison in the video below. There is also talk of his mullet, and the obligatory defense of the trendy hairstyle from one of the most feared pass rushers in the league.

To top off the resume of his outrageous demeanor and unpredictability, Wilson put on a show at the ESPY’s this year, arriving to the awards in a spandex tuxedo. Here are three of the most hilarious videos I could find of the Giants closer.