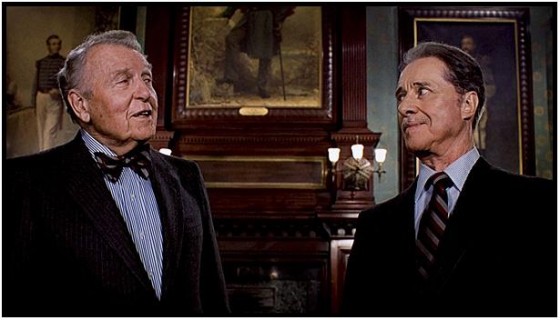 ‘Tis the season to watch your favorite Xmas flick. Whether you go for traditional holiday cinema or some of the newer silly season delights, you’ll likely notice a movie staple included in your viewing choice: The bad guy(s). In fact, some of film’s best scoundrels have been featured in Christmas classics. In order to remind us it’s better to be kind and caring to one another, it helps to have a selfish dick dumping on all things festive. Excluding cartoons and movies based on cartoons, here are ten nasty Yuletide villains.

The late great Bernie Mac plays Gin, a cowboy hat wearing security chief brought aboard to investigate Billy Bob Thornton’s thieving mall Santa. Gin is an opportunistic prick who would rather blackmail Thornton and his dwarf partner than do his job.

Ah, nothing says Christmas like a money-hungry corporate tycoon who cares more about the bottom line than the consumers who purchase his products. John Lithgow is brilliantly slimy as B.Z., the fat cat scheming toymaker who conceals his combustible candy canes from the public to save his own ass.

An oldie, but a goodie. Porter Hall plays a douchebag shrink who enjoys diagnosing kind-hearted folk as being mentally disturbed. He also lies in order to get Santa institutionalized at Bellevue. What a guy.

Bumbling burglars Harry and Marv endure much pain trying to break into little Kevin McCallister’s pad. Paint cans to the face, nails to the feet and fire to the head are just a few of their trials and tribulations. They could have just moved on to another house, but where’s the fun in that?

The neighborhood bully was always an annoyance to all those unlucky enough to be a target of his wrath. Scut Farkus, with his awful hat and scary braces, was the bane of Ralphie Parker’s existence. That is until Ralphie beats the piss out of him.

Randolph and Mortimer Duke are pompous assholes who specialize in commodities. Their idea of holiday cheer is betting whether a homeless panhandler can switch places with a blue-blooded dandy and still succeed. Who cares if you destroy a couple men’s lives along the way.

Any psycho ex-special forces operative who gets his jollies burning his own skin with a lighter has issues. The fair-haired Mr. Joshua’s hobbies include blowing up hookers, shooting cops and kidnapping teenage girls. Probably not the guy to invite to your Christmas party, unless you have a death wish. Watch him in action here.

If any wheelchair-bound curmudgeon deserves to be kicked down a long flight of stairs, it would be Mr. Potter. This soulless slumlord is a liar and a cheater who convinces lovable schlub George Bailey he’s a born loser worth more dead than alive.

Any of the Scrooge incarnations works. He’s still the same penny-pinching miscreant in whatever adaptation you fancy. Of course, old Ebenezer changes for the better at the end, which precludes him from being the baddest of the big screen baddies.

Sophisticated, suave and ruthless is what you want in a movie villain. Alan Rickman’s Hans fits the bill and then some. His murderous party crashing antics in the Nakatomi building and attempt to steal $640 million in bearer bonds is a gift that keeps on giving.