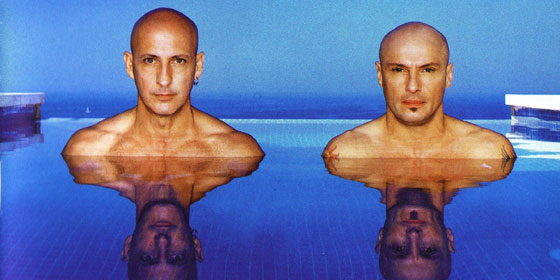 Music duos come in all shapes and sizes. Some are legendary, like Simon & Garfunkel. Others are known for being eclectic, like The White Stripes. And some are famous for their never-ending string of smash hits, like Hall & Oates. Then there are those who fall into the category of, uh, crap. This isn’t to suggest they failed to achieve some level of success, or don’t have dedicated fans. But to consider them talented artists would be doing a great disservice to those singers/songwriters who create memorable music worthy of our praise. With that in mind, here are ten not-so-dynamic duos.

Weepy, shoot-yourself-in-the-mouth-with-a-.357-Magnum love ballads have never sounded worse. This Australian gruesome twosome dropped a handful of moderate hits during the early ’80s that are just as mind-numbing today as they were back then. Their catalog is ideal for junior high dances, but not much else.

Professional footballers turned one-hit-wonders, Glenn Hoddle and Chris Waddle never released another song after “Diamond Lights,” much to the delight of all those who respect quality vocals. Watch them totally butcher the lip-synch in the following video. It’s amusing.

These pint-sized “rappers” made quite a splash in 1992 with their #1 hit “Jump.” They managed to hang around for another five years producing a forgettable collection of hip hopish junk. Fittingly, Mac Daddy and Daddy Mac are remembered more for wearing their clothes backwards.

With flowing manes of blonde hair, the Nelson twins clung to the remnants of the Hair Band ’80s and squeezed out a pair of Top 10 hits in 1990. Believe it or not, Matthew and Gunnar are still active today. Look out for them the next time a traveling carnival rolls into your town.

Kevin Bacon is a fine actor, but his singing prowess leaves much to be desired. Using your fame and fortune to launch a music career is okay as long as you have the ability to create material people might actually want to purchase. They aren’t awful, but they aren’t good either.

This husband and wife duo were a poor man’s Carpenters. They had a couple massive hits in the mid-’70s before falling off the map in 1980. Their music is harmless and peppy, but that doesn’t make it any less annoying.

Can George Michael sing? Sure he can. Was Wham! a huge success during the ’80s? You betcha. Did their songs make you want to drive your car into a bridge abutment when it they on the radio? Most definitely. Let’s just say they were a little too flamboyant and leave it at that.

Violent J and Shaggy 2 Dope could be classified as cult faves among the hardcore hip hop community. They can’t really rap and their lyrics are laughable in a bad way. However, they do have a loyal fanbase known as Juggalos who will defend them night and day.

Anyone who wears a mesh shirt deserves universal condemnation. “I’m Too Sexy” is one of those songs that inexplicably blows up only to disappear almost as quickly as it burst onto the scene. Right Said Fred never took themselves seriously, but that’s easy to do when you’re completely devoid of talent.

Blame it on the fraud and lip-synching. Milli Vanilli could’ve been mega-stars if not for all the lying and cheating. Their meteoric rise and subsequent fall is one of the most infamous stories in the history of popular music, so they have that going for them. Well, Fab does… Rob is dead (RIP).