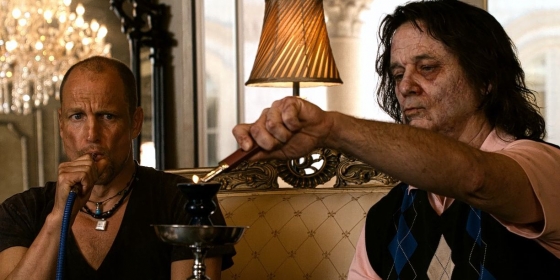 Bill Murray’s cameo in Zombieland is great, but it didn’t make the list.

Ever watch a movie and be completely thrown by an unexpected celebrity cameo? It can be rather off-putting, especially if it’s a person or persons not normally seen on the big screen. Be it rock stars, athletes, politicians, talk show hosts or corporate tycoons, their presence really puts a damper on the fiction, which can be good or bad depending on how awful the film is. Here are ten such cameos that fall under the category of “strange.”

As a result of his chronically negligent parents, little Kevin McCallister finds himself navigating the mean streets of New York City all by his lonesome. Lucky for him, 99% of the adults in Manhattan are idiots, so his stay is spent in style, which includes duping his way into the Plaza Hotel where he meets then owner Donald Trump. In the pic below, ‘The Donald’ is demanding to see young Kevin’s birth certificate. 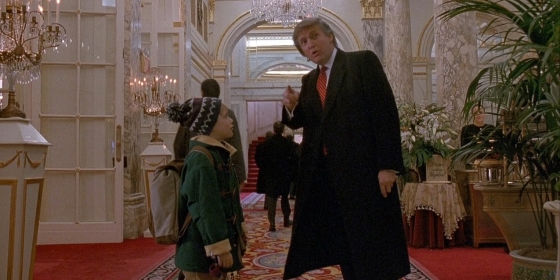 There’s a reason why professional athletes don’t often transition into movie stars. They are horrible actors. Of course that didn’t stop the geniuses behind Celtic Pride from casting famous Boston Celtic Larry Bird to play himself. Behold Larry Legend’s blank stare and stilted delivery. Not to be confused with Dan Aykroyd and Daniel Stern’s atrocious mugging.

A swarm of South American killer bees migrate to southern California to sting the populace into submission in this post Jaws creature feature. In between scenes of monotonous talking and cringe-inducing overacting, up pops ex-President Gerald Ford on a Tournament of Roses Parade float. It’s obviously stock footage, but it still makes you pause and go, “What the fuck is Gerald Ford doing in this piece of shit?” 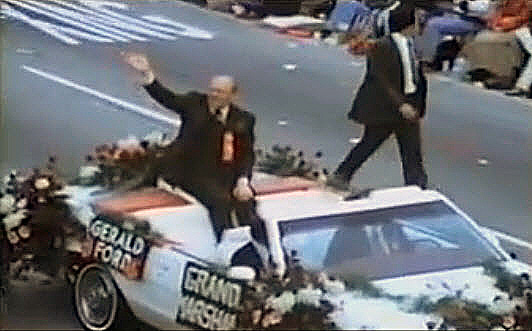 Cabin Boy is so inept it’s awesome. Comedian Chris Elliott’s one shot at superstardom falls woefully short due to ill-advised gags and all-around weirdness. It’s a perfect storm of failed expectations highlighted by the appearance of longtime Elliott mentor David Letterman, who lobs a salvo of insults at Elliot’s fancy lad, while peddling a pile of stuffed monkeys.

Director John Landis is the king of WTF cameos. In particular, he really gets his kicks and giggles putting his fellow directing pals in front of the camera. In the unwatchable third Axel Foley adventure, beard buddy George Lucas shows up wearing a sweatshirt befitting the man who created Jar Jar Binks and cast Hayden Christensen to play one of cinema’s greatest villains. 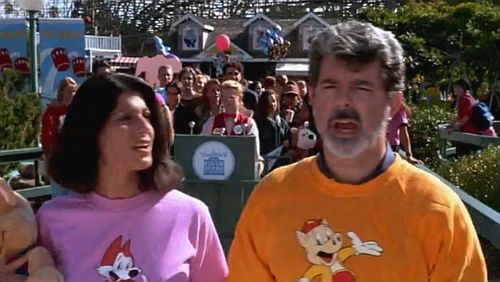 James Bond pursuing a terrorist through the Miami International Airport should be intense with a capital I. But when Virgin founder Sir Richard Branson is getting the wand at security, the dramatic impact can’t help but take a hit. It’s a peculiar distraction in an otherwise fantastic flick.

Considering the punchline Guns N’ Roses have become over the last fifteen years it’s easy to forget they were once the biggest band in the world. So big they warranted a cameo alongside Dirty Harry himself in The Dead Pool, portraying friends to rocker Johnny Squares, played by Jim Carrey in one of his earliest film roles. Weird. 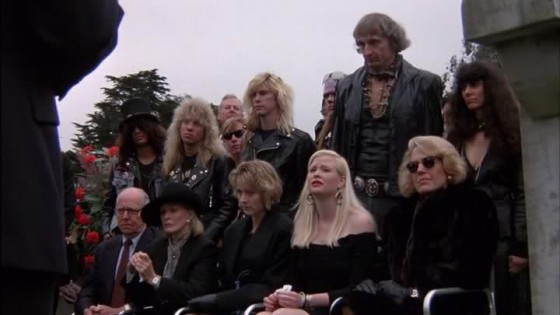 Our ol’ pal John Landis is back. I told you he liked celeb cameos. Spies Like Us is rife with familiar faces from Joel Coen, Frank Oz, Sam Raimi, Terry Gilliam, B.B. King and my personal favorite, Mr. Bob Hope, who hijacks the silliness by swinging a golf club and delivering a timely one-liner. Why the hell is he there? Who cares, just go with it.

2) Brett Favre – Something About Mary

“What the hell is Brett Favre doing here?” The big-toothed sleazeball Pat Healy summed up everyone’s sentiments with that one single line. We all knew Mary’s ex-boyfriend was named Brett, but we had no idea it was that Brett. Ya know, the one who likes to take cell phone pics of his little quarterback. 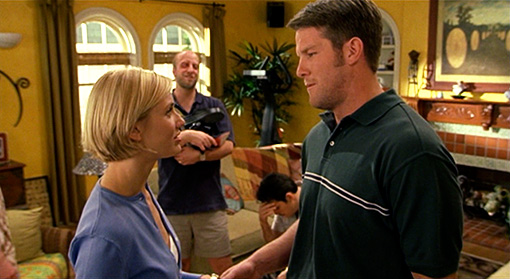 The decision by writer/director Kevin Smith to cast songstress Alanis Morissette as God was, well, ironic… don’t you think? *soft-shoes offstage with top hat and cane* Prior to this strange spin, Morissette had done very little acting, but she has since appeared in episodes of Curb Your Enthusiasm, Sex and the City and Weeds, not playing God.