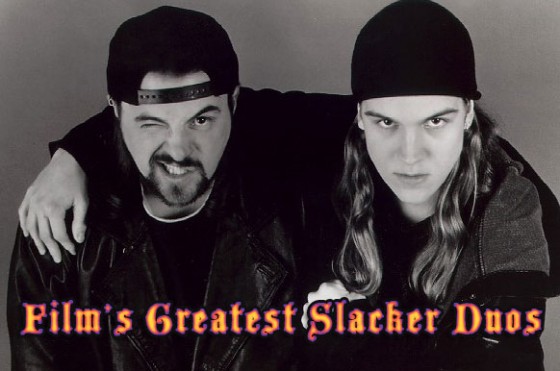 Butch Cassidy and the Sundance Kid. Vincent and Jules. Bogie and Bacall. Those pairs can’t hold a candle to these characters: The slacker buddies in film.

The slacker buddies make us laugh. They are everything our parents do not want us to be. But they share an unbreakable bond that is more important than anything else in life. Listed below are Gunaxin’s ten favorites. Did we miss any? Of course we did. Name them in the comments and be sure to call us retarded for the oversight.

VOTE FOR YOUR FAVORITE PAIR AT THE BOTTOM

Bill S. Preston, Esq. (Alex Winter) and Theodore “Ted” Logan (Keanu Reeves) are destined to form the band “Wyld Stallyns,” but the only thing standing in their way is passing history class.

Beavis and Butthead (voiced by Mike Judge) travel across the country in an attempt to get their TV back and score with a chick.

Lloyd and Harry travel to Aspen (Someplace warm. A place where the beer flows like wine. Where beautiful women instinctively flock like the salmon of Capistrano. I’m talking about a little place called Aspen.) to return a briefcase to a woman who left it at the airport.

Two hotties (Mira Sorvino and Lisa Kudrow) go to their high school reunion and lie about their lives.

9
Shaun & Ed
Shaun of the Dead

A hero must rise… from his sofa. (Simon Pegg and Nick Frost)