Travel > Stay > Ten of the Coolest Pads on the Planet

Ten of the Coolest Pads on the Planet 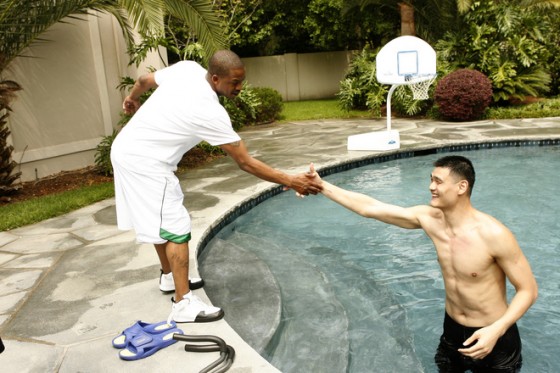 When you’re a young turk who’s making his fortune, there’s a certain charm to traveling the world and living out of a suitcase. Moving from town to town makes sense in the hit and run world of wealth and sexual acquisition. Traveling light will always ensure you’re just where you have to be to get the things you need and want to be a Man of Conquest. But there comes a time in every player’s life when he has to slow down and make a stand. A time when he takes the treasure and power he’s accrued on his travels and uses it to build a fortress to get even more treasure and power. Every king needs a castle, man. Here are ten of the world’s asskickingest pads that will tell the world you have arrived and damn it, you have a pretty fucking sweet place to put your shit. 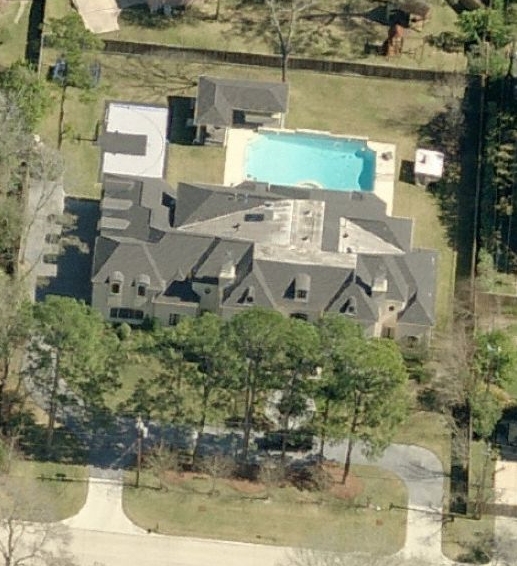 As obscenely expensive mansions go, NBA superstar Steve Francis’ Houston digs are pretty standard. It’s 10,000 square feet has all the usual perks like a huge kitchen with a professional chef on staff, a swimming pool, and its own movie theater. But what sets Chez Francis apart is its very own private barber shop. Yes, a man who’s never been seen in public with anything besides a closely shaved head has his very own professional barber shop in his house. Steve Francis proves yet again that old adage, any clown can spend 20 bucks at WalMart on a pair of clippers to cut his hair with, but a real man pays a ridiculous amount of money to put a personal barber shop in his house to get exactly the same results. 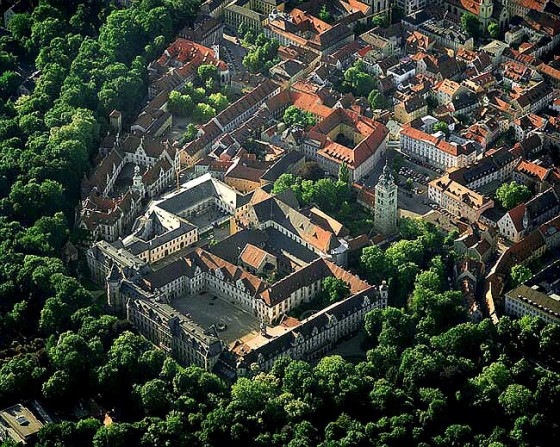 At first glance, this may look like any old European castle owned by any old piece of Eurotrash, but Schloss Thurn und Taxis is a little different. It’s owned by the biggest, richest piece of Eurotrash there is: Germany’s Billionaire Bachelor Prince Albert von Thurn und Taxis. Just how rich is this joker? He made the Forbe’s list of the world’s wealthiest people when he was six! To put that in perspective, how much money did you have when you were in the first grade? von Thurn and Taxis had more than most countries. When he’s not racing cars or generally hanging around being disgustingly rich and German, von Thurn und Taxis kicks it very old school at Schloss Thurn und Taxis a former monastery that his family bought in the 19th Century. This Neo-Renaissance beauty has all the bells and whistles you’d expect from a former monastic abbey turned private residence. Including loads of beautifully appointed rooms, its own museum, and the world’s largest collection of Kraftwerk memorabilia. OK, we made that last one up. But the dude’s German. Odds are he’s got Autobahn on vinyl somewhere in that castle. 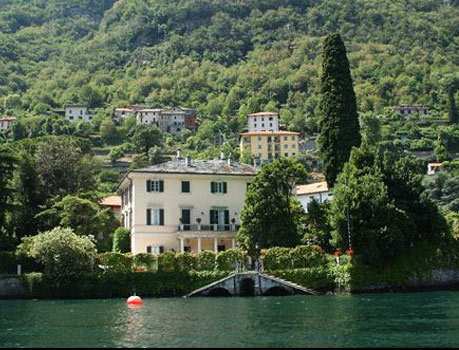 As Hollywood Bachelors go, there aren’t many cooler than actor/director/writer George Clooney. In a world full of botoxed poseurs and bleached out smiles, he’s the real deal. So where does a megarich, uberfamous supercool dude kick back when he’s not filming movies or chasing starlets? Villa Oleandra, that’s where. Located on Como Lake in Lagio, Italy, Villa Oleandra ain’t your ordinary Italian mansion. On the outside, it has all the old world charm of an incredibly expensive Italian villa. On the inside, it has a pool table! Clooney’s place also has a private movie theater, fully stocked wine cellar and two kitchens. One for Tuscan cuisine and one for crappy, non-Tuscan cuisine. An interesting side note- the house once belonged to the Heinz family before George got his hands on it. And you thought ketchup was cheap. 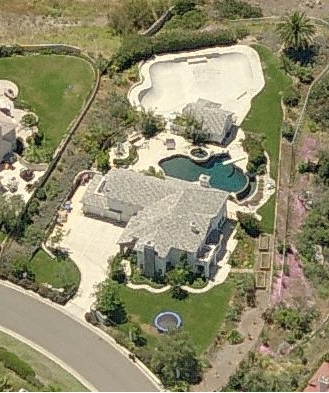 So what do you do if you’re the world’s most famous skateboarder and you want to do some sick vert and bust a diamondz ollie out of your trickionary without getting hassled by the pushers and donut shop? Well, first, you buy a f*cking dictionary and then, if you’re Tony Hawk, you build your very own skate park. From the outside, Hawk’s California home doesn’t look like much, but besides his full size skate park in the backyard, Hawk also has a pool and a full size basketball court. But what about when you just want to sit on your ass and make pixelated versions of yourself do all the heavy lifting? Hawk has that taken care of, too. His living room is tricked put with $150,000 worth of videogame equipment. He’s got all the latest consoles and a huge 65 inch plasma screen to play them on. Not bad for a guy who made his living doing something most people give up when they’re 14. 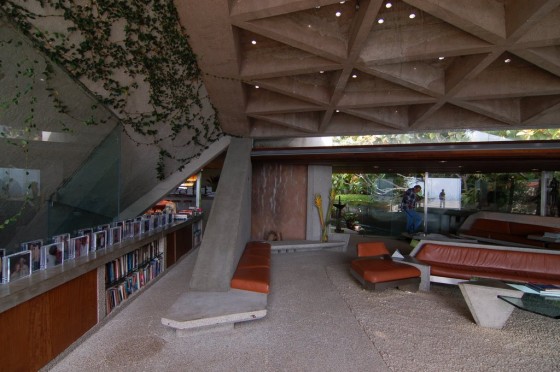 Don’t let the name fool you. It may sound like a rest home for retired Borscht Belt comedians, but the Sheats Goldstein Residence is quite possibly one of the coolest houses in America. You probably don’t recognize the name, but you’ll definitely recognize the living room. To architecture snobs, The Sheats Goldstein residence is an perfect example of a dwelling deriving its form from the surrounding natural area; a key feature of a style known as American Organic. To everyone else, it’s Jackie Treehorn’s place in The Big Lebowski. Yes, the fictional palace built by the man who “treats objects as women, man” is somebody’s actual house. Built in the early Sixties in Beverly Hills, the home has been a longtime favorite of the architecture press and Hollywood, appearing in several magazines and films. But to Lebowski fans the world over, it will always remain the place where Ben Gazzara drugged Jeff Bridges’ white Russian and then drew a picture of guy with a giant cock. 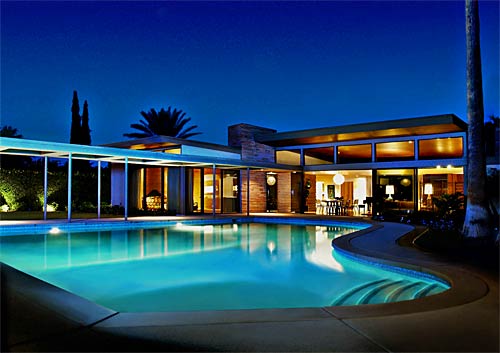 Previously featured in our look at terrible celebrity painters, Frank Sinatra may not have known his way around a canvas and brush, but he sure did know how to pick a place to hang his hat. Home to his triumphs, his conquests, and his legendary liquor cabinet, Twin Palms Estate is a monument to the American Postwar dream of relaxed suburban living, casual elegance, and spending every waking moment as drunk as humanly possible. Not unlike the man himself. As an added bonus, you can stay in Twin Palms tonight. For a measly $2600, you can pull up to the same driveway where Sinatra dumped all of Ava Gardner’s clothes when he threw her out or gargle over the same sink that still has a crack in it from the champagne bottle he hurled at her a few years earlier. It’s the perfect place to rest, have a shot of bourbon, and if you’re in the mood, leave your wife.

4) The Palace of Bubbles – French Riviera 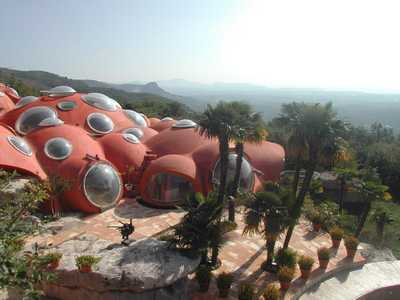 Although it may sound like a gay disco or the final stage of a Super Mario game, the Palace of Bubbles (or Palais de Bulles) is actually the summer retreat of French fashion designer Pierre Cardin. Started in 1975 and not completed until 1989, this bubble influenced hideaway sits on the French Riviera. Built by a Finnish architect who hated corners, the Palais de Bulles is a curvy masterpiece. Every wall and piece of furniture looks like something out of a French 70’s Sci-fi movie, but, you know, in a cool way. It’s the perfect place to get away from the hustle and bustle of the non-bubble world. And even though from the outside it looks a little like a dying amoeba, who cares when your living in a Finnish man’s dream? That may be the strangest sentence ever written.

Before he turned into a bloated, mumu-clad disaster, Marlon Brando was the toughest high school dropout to ever reach the top of Hollywood. Difficult, spoiled, and, prone to bizarre flights of fancy, it’s no wonder he never fit in with the Beverly Hills crowd. Longing for a place to call his own far from the bright lights and silicon, Brando found his hideaway 4,100 miles away from Los Angeles on a little island in the South Pacific. Just a short plane ride from Tahiti, Tetiaroa was Brando’s personal retreat. Although he made a couple half-hearted attempts to build a resort on the island, he mostly kept it just as he found it. Undeveloped, wild, and incredibly beautiful. Brando stopped visiting the island after it was the site of a lot of personal tragedies for him and it was eventually sold by his 9 kids to some real estate developer, but for a few short years, it was the epitome of a dream getaway spot. A place where a man could sleep on the beach, hike through the jungle, spot incredible tropical wild life, meet attractive Tahitian girls, and most importantly of all, go days and days without wearing pants. 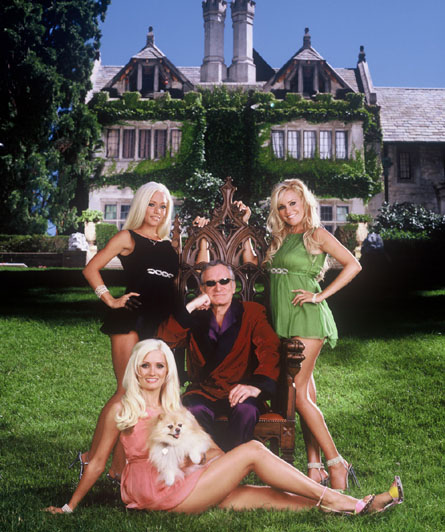 What?!? The Playboy Mansion not in first place? Yeah, we know. Hugh Hefner’s Pleasure Palace has been the pinnacle of Bachelor Pads for over 30 years. With its 29 rooms, private zoo, and infamous grotto, The Playboy Mansion is a veritable shrine to the hedonist’s lifestyle. The place even has a separate building full of arcade games and a room that has a mattress for a floor. And out of all the places on this list, The Playboy Mansion is still the place where you’re most likely to bump into a big-boobed blonde coming out of the toilet. Square foot for square foot, it’s pretty awesome, even if it does have that old man smell now. Most dudes would give their left nut for the keys to the Mansion. But what if you could have everything the Playboy Mansion has- in the sky? 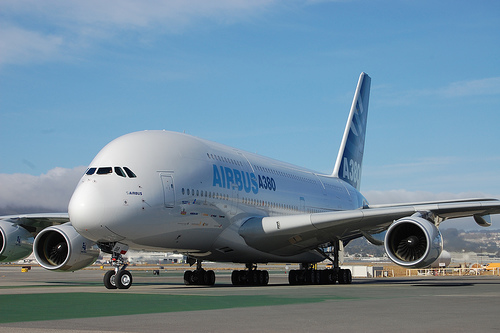 Yes, Even better than Hugh Hefner’s jiggle shack is the Double-Decker Airbus A380 Flying Palace. Prince Al-Waleed bin Talal bin Abdul Aziz al-Saud (his buddies just call him Larry) has become the first individual in the world to purchase an Airbus A380 Double Decker airplane for personal use. After dropping a cool $319 mil on the plane itself, al-Saud poked through his couch and came up with another $150 million to pimp his ride Saudi Billionaire style. The plane has an onboard jacuzzi, a games room, a 15 seat boardroom, and a lounge with Arabian style tents and and a fibre-optic mural that mimics the view of a shifting desert. And just in case anyone gets any ideas, he’s putting in a missile defense system. This sweet pad just makes Hefner’s boob-filled jacuzzi seem lame. 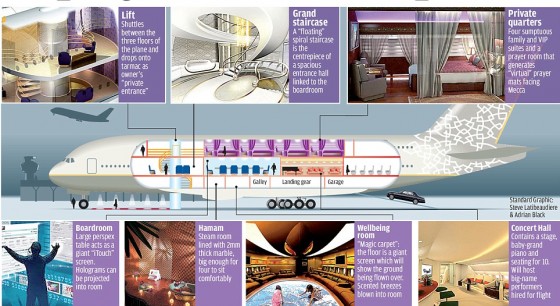