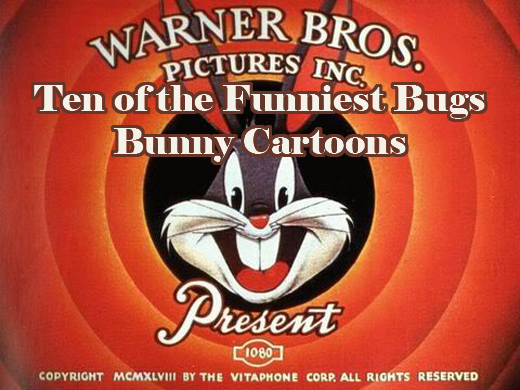 Bugs Bunny was perhaps the one cartoon character who understood just where he was, and just what kind of power he truly wielded. Bugs somehow knew that he was a cartoon, and it realizing that, knew that it gave him an advantage over everyone else around him. Bugs never flaunted his knowledge, but he did, often, use it to his advantage. He somehow understood that when cornered, or involved in a sticky situation, his innate ability to suddenly have what he needed at a moment’s notice was the one true thing that put him on a higher plane of existence than all of his toon cohorts.

Bugs was conniving, sly, wily, and sarcastic as you please, but never to his detriment. If his mouth got him into trouble -and it often did- Bugs had the means to worm his way out one way or the other. So, in honor of YouTube acquiring its own ‘Looney Tunes’ channel, and the proposition of new Bugs cartoons to come, here is the master at his craft in ten of his funniest shorts.

Rocky and Mugsy return, as does the classic oven gag.

Bit O’ Trivia! “In the original short released theatrically, Yosemite Sam’s introduction line was: “Yeah, Yosemite Sam. The roughest, toughest, he-man stuffest hombre whose ever crossed the Rio Grande…and I don’t mean Mahatma Ghandi!” For the re-release (which premiered around the time of Ghandi’s assassination), the last line was changed to “…and I ain’t no namby pamby!”

The Gremlin holds the distinction, along with Cecil Turtle, the unnamed mouse from Rhapsody Rabbit and the fly from Baton Bunny, of being one of the very few antagonists to actually outsmart and rattle Bugs.

Bugs Bunny: And don’t think it hasn’t been a little slice of heaven… ’cause it hasn’t.

Bit O’ Trivia: “The sequence where Bugs impersonates a flamboyant hairdresser was re-used in Hare-Abian Nights in 1959. When that cartoon aired on ABC, the entire sequence was cut.”

Sir O of K: Surrender, varlet. Thou art the prisoner of me lance.
Bugs Bunny: I art? And whomsoever art thou, in thy cast-iron tuxedo?
Sir O of K: I, knave, am Sir O of K, Earl of Watercress, Sir Osis of the Liver, Knight of the Garter, and Baron of Wooster-cester-shister-shyster-schuster-shuster-shister-shire… shire.
Bugs Bunny: My, he’s a big one! Hey, look, pressure cooker. I bet you know a lot of my friends. Ooh! Like, uh, Duke of Ellington, Count of Basie, Earl of Hines, Cab of Calloway, Satchmo of Armstrong.