Humor > Lists > Ten of the Most Underrated Simpsons Characters

Ten of the Most Underrated Simpsons Characters

A while ago, Cracked did a list focusing on underrated Simpsons Characters. Now, generally I have nothing against Cracked, in fact I often laugh heartily at much of its content, but when a huge Simpson fan such as I (one who has primarily enjoyed and/or thoroughly enjoyed even the lamer, lesser seasons and really dug the movie) read the list they so thoughtlessly posted, I was disappointed and a bit sad. Their list really was crappy, and much of the comments reflect such distaste. So, being a list writer myself, I figured why not one-up the Cracked fellows and see if the choices I made are read any better. So, without further stalling and pointless explanation… 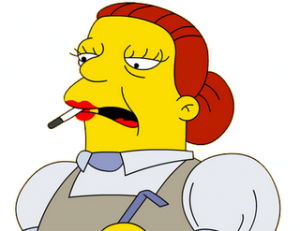 History: Originally voiced by Doris Grau (she passed in 1995), Lunch Lady Doris is your standard mocking look at everything a school cafeteria worker is: laconic, monotonous, and perpetually accepting food ingredients that are far sub-par. Though used sparingly and just a background for many years, she resurfaced in the 18th season voiced anew by the amazing Tress MacNeille. 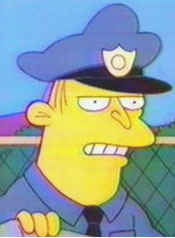 History: Edward “Eddie” Edison is one of the two cops who aids Chief Wiggum on every mission. Unlike Lou he is unintellegent but not as dumb as Wiggum. He is voiced by Harry Shearer. As a background character, Eddie is complimentary and, though seemingly useless, would throw off the cosmic balance of the Police trifecta and would likely toss the universe out of whack. 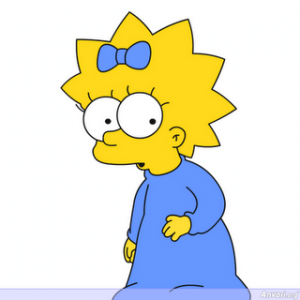 History: Though frequently overlooked by Homer even going so far as to be called ‘Other Lisa’ or, when reminded of his third child as Margaret and honestly not having any clue as to who she is, Maggie has made quite an impression on the Simpson family. She has, albeit incomprehensibly, shot Mr. Burns and has managed to rescue the family a time or two (see: The Movie) and rounds out the family quite nicely, even if she is the daughter of Kang.

Ralph: [whispering] ‘Lisa, what’s the answer to number seven?’
Lisa: [whispering] ‘Sorry, Ralph. That would defeat the purpose of testing as a means of student evaluation.’
Ralph: [pauses] ‘My cat’s name is Mittens’

Ralph: (To a wolf): ‘Will you be my mommy? You smell like dead bunnies…’

History: Ralph is a dolt. There really isn’t two ways about it. His friendship with any of the more prominent characters is always tenuous at best. When Valentines Day rolled around, Lisa felt awful that no one was giving poor Ralph any cards. Her card, as Ralph read it aloud instantly infatuated, said: I Choo-Choo-Choose you and, ‘There’s a picture of a train’. Ralph is innocent, perhaps further along in school that he really ought to be, and very proud of his Dad’s Forbidden Closet of Mystery.

Quotes: Homer: ‘That guy has gotta go!’
Marge: ‘Hmm, I know how you feel. But he is good with the kids.’
[pan upward to Lisa’s room, where Otto is telling her a bedtime story by candlelight]
Otto: ‘So the lady drove faster, but the strange car kept banging into her from behind…’
[Lisa gasps]
Otto: ‘So she swerved off the road into the woods, and lost the other car. And then, she realized that the man in the other car wasn’t trying to hurt her. No, he was trying to warn her… about the ax-wielding maniac hiding in her back seat!’
Lisa Simpson: ‘Did the maniac kill her?’
Otto: ‘Natch! And you know how I know?’
Lisa Simpson: ‘How?’
Otto: ‘Because… *I* was that maniac.’
[Lisa’s scream shakes the whole house]
Otto: [hastily] ‘I was just kidding!’

History: Otto Mann: stoner, alcoholic, rocker… oh, and a bus ‘driver’. Otto has been the cause of or a party to each and every accident the school bus has ever been in, and there has been an awful lot. Otto also attended Brown University, where he graduated Sigma, taught briefly and almost received tenure. Seriously.

Quotes: Cletus: ‘Hey Brandine, you could wear this shirt to work.’

Cletus: ‘Hey Brandine, you might ka wear these to your job interview.’

Brandine: ‘And scuff up the topless dancing runway? Nah, you best bring em back where from ya got em.’ 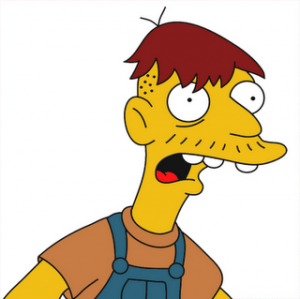 History: Cletus was introduced during the fifth season in “Bart Gets an Elephant”. He is shown as one of the “slack-jawed yokels” gawking at Bart’s elephant, Stampy. He was the go-to character for a quick laugh on the show, and is a staff favorite. He was introduced as a character in “22 Short Films About Springfield”. The episode featured bluegrass music played on a banjo accompanied with different taglines stating the abnormal things Cletus has done including eating a skunk and losing a toe. “Hey ma! Get off the dang roof!”

Quotes: Disco Stu: “Disco Stu likes disco music- the cats in Funky Business know how to move it, groove it and prove it, ya dig?”

Disco Stu: “If Disco Stu ever lost his mind and decided to get hitched, they’d be the only choice baby. So, so groovy”.

Disco Stu: “Did you know that disco record sales were up 400% for the year ending 1976? If these trends continue….Ayyy!”. 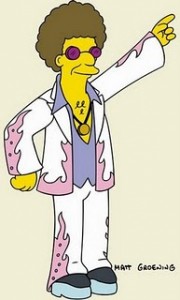 History: He first appeared in the episode “Two Bad Neighbors”. During a neighborhood yard sale, near the beginning of the episode, Homer and Marge search their attic for items they might sell. Marge suggests Homer’s old Rhinestone Nights Fashion Gun. Homer protests, “…I need it to rhinestone up my old clothing!”. Marge then holds up Homer’s old leather jacket complete with rhinestone lettering. “Who’s Disco Stu?” Marge asks, referring to the words on the back. Homer explains, “I wanted to write ‘Disco Stud’ but I ran out of space. Not that Disco Stu didn’t get his share of the action!” Awesome.

Quotes: Frink: ‘Oh my great good God! Gentlemen, your attention please. I am detecting a gigiantic amphibious life-form, it’s 80 meters long and it’s heading this way. Oh good glayven it’s on my shoe. It’s a small frog, just get off, just get off there, just get out of it, get out of it. Stupid machine, oh wait a minute, this isn’t the Monsterometer, it’s the Frog-Exaggerator Mm-hai.’

Frink: Ha ha wha. ‘Oh, sorry I’m late. There was trouble at the lab with the running and the exploding and the crying when the monkeys stole the glasses off my head. Wh-ha ha.’
(The screen fades.)
Frink: ‘Oh, no, please no. I have a funny story if you listen. I even wrote theme music, here listen. Ha ha, mm-m hey hey, Professor Frink, Professor Frink, He’ll make you laugh, he’ll make you think, He likes to run, and then the thing, with the… mm-m person… Oh boy, that monkey is going to pay.’

Frink: ‘…and these (handing books to Homer) should give you the grounding you’ll need in thermodynamics, hypermathematics and of course microcalifragalistics.’
Homer: ‘Er, look, I just want to know how to invent things.’
Frink: ‘All you have to do is think of things which people need but which don’t exist yet.’
Homer: ‘You mean like an electric blanket-mobile?’
Frink: ‘Www oh well, possibly. Or you could take something that already exists and find a new use for it, like…’
Homer: ‘Hamburger earmuffs.’
Frink: ‘Mmm well, I suppose that would qualify.’
Homer: ‘Thanks sucker.’ (Homer throws the books and runs off)
Frink: ‘Weh, uh, alright just stay calm Frinky. These babies will be in the stores while he’s still grappling with the pickle matrix bhay-gn-flay-vn’

History: Never fully appreciated for his extreme genius, Professor John Frink has a tendency to not only over exaggerate his inventions and creations, but also to arrive either just too late or just in time -though with a useless machine of one kind or another- to the problem at hand. Though never fully realized as a great character, we did find out that his dad, voiced by Jerry Lewis, was just as big of a nut job as Frink is.

Hans: ‘Today, part four of our series of the agonizing pain in which I live every day.’

College girl: ‘She’s worse than that 80 year old who pretended to be a freshman.’
Hans Moleman: ‘I just wanted a place to sit down…’ 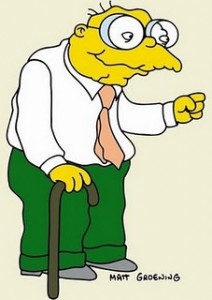 History: Hans has escaped death innumerable times, usually highly improbably. He survived his car blowing up, catching on fire due to the powerful magnifying effect of his glasses, Montgomery Burns drilling into his brain, capital punishment (in a local jail) after Homer eats his last meal, being buried alive, and being engulfed by the “anti-escape bubble” that was attempting to catch Marge (a parody of a similar device from the 60s show the Prisoner). Many times people will totally disregard him, usually leading to something like death, or simply imprisonment, but since he appears, even after “dying”, those later appearances could indicate he survived.

Quotes: Willy: “Now look boy. If your da goes ga-ga, you just use that ‘shin’ of yours to call me and I’ll come a-runnin’. But don’t be readin’ my mind between four and five. That’s Willie’s time.”

Willy: “If elected mayor my first act will be to kill the whole lot of ya, and burn your town to cinders!”

Willy: “I made millions in softwear, but lost it all at the track.”

Willy: “Get your haggis, right here! Chopped heart and lungs boiled in a wee sheep’s stomach! Tastes as good as it sounds. Good for what ails ya!”

Willy: “Grease me up lassie!”

Willy: “I was wrestlin’ wolves back when you were at your mothers teat” 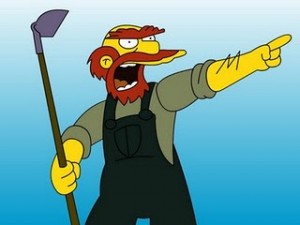 History: It takes an extreme opposite to compete with Principal Skinner’s milktoast, pasty demeanor, and the gruff, pissy, snarky, stereotypical angry Scott, groundskeeper Willy is precisely the guy. Always the handyman, however always the groaning and grumbling hired help, Willy will clean the puke, re-seed the football field, and climb through the sewers to achieve his goal. All that aside, nothing was freakier than seeing Willy as Freddy Krueger in The Treehouse of Horror. So cool.