Grub > Food > Ten of the Most Unusual SPAM Cans

Ten of the Most Unusual SPAM Cans

Spam luncheon meat is a canned precooked meat product made by the Hormel Foods Corporation. The labeled ingredients in the Classic variety of Spam are: chopped pork shoulder meat with ham meat added, salt, water, sugar, and sodium nitrite to help “keep its color”. The product has become part of many jokes and urban legends about mystery meat, which has made it part of pop culture and folklore. I have partaken in a bit over the course of my 34 years on this planet and, though I don’t especially love it, it’s honestly a little bit of OK. Here’s some of its incarnations from its inception. Yum! 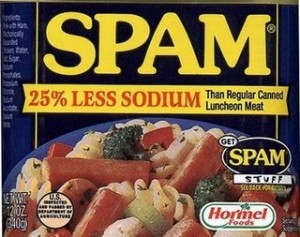 Oh, wait, the label says “…less sodium than REGULAR CANNED LUNCHEON MEAT”, so, apparently, there are enough separate and different OTHER canned meats to warrant a label taunting how much better SPAM is… over OTHER CANNED MEATS! I’m not so sure I’d brag about that.

SPAM: Looks better, but tastes the same kind of better. 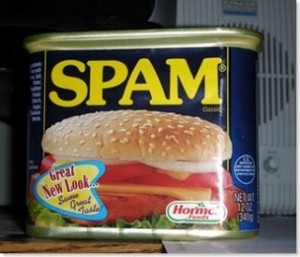 I still don’t agree with the “great taste” comment. More like, “Say, at least it’s not all together dog food!” That would be far closer to the truth.

SPAM has been around for SEVENTY YEARS? Holy SHIT! 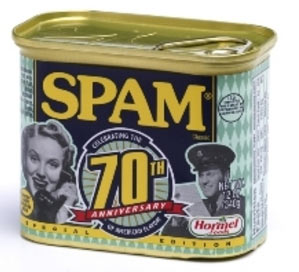 Yup, it appears so. Here’s a slice (ha ha) from Wikipedia:

“Introduced on July 5, 1937, the name “Spam” was chosen in the 1930s when the product, whose original name was far less memorable (Hormel Spiced Ham), began to lose market share. The name was chosen from multiple entries in a naming contest. A Hormel official once stated that the original meaning of the name Spam was “Shoulder of Pork And haM”.[citation needed] According to writer Marguerite Patten in Spam – The Cookbook, the name was suggested by Kenneth Daigneau, an actor and the brother of a Hormel vice president, who was given a $100 prize for coming up with the name.[4] At one time, the official explanation may have been that the name was a syllabic abbreviation of “SPiced hAM”, but on their official website, Hormel states that “Spam is just that. Spam.“ 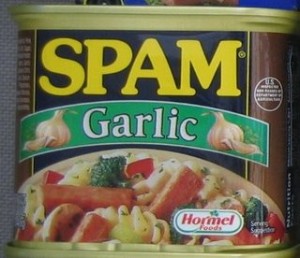 Wow. As though having wretched post-SPAM consumption breath wasn’t bad enough, let’s try out the kind that has bits o’ garlic festooned throughout! I’m in! 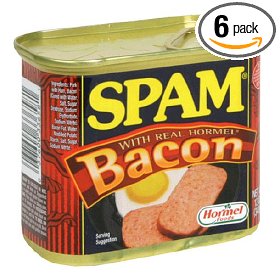 I’m not entirely sure why, but something about this product just wails cardiac arrest. Oh, and just in case you were at a loss after one can has been eaten… for some reason, this one comes in a convenient 6 pack! Oh happy day! 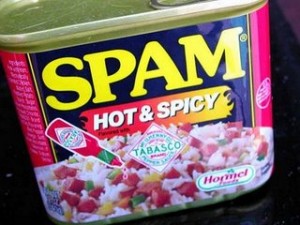 You know, I love me some spicy vittles, that’s no big secret, and, to that end, I suppose spicing up the horrid foodstuff that is SPAM with Tobasco may seem like a brilliant idea… but several of you would be very, VERY wrong.

Oh, and look: Just in case Tobasco wasn’t enough of an inferno… 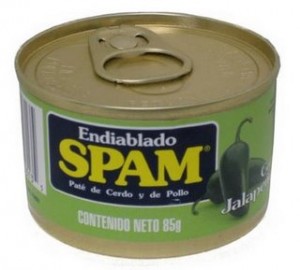 Set your poor ass aflame with this sure-to-shit concoction. My goodness! Was it wholly necessary to combine Japapeno peppers with the already stomach churning mess that is SPAM? Apparently.

SPAM and South Korea! Thanks WWI! 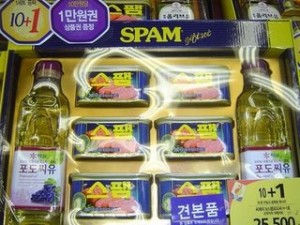 So it seems that during the first great war, our boys were so hard up for chow that the US Government, in all its brilliance, shipped a shit-load of SPAM overseas. So, after we inundated the easter shores with the crap, they latched on like, well, something that latches on to SPAM… I guess.

Those wacky Waikiki-ans dig them some SPAM! 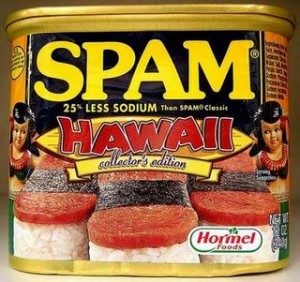 The picture on the can absolutely says it all. Yes, the little seaweed-wrapped, rice-encrusted spam sandals look stunningly mouth-watering, but it’s the little Hula-Hula girls on either side that intrigue me the most. So cute.

What would SPAM be without… SPAM! 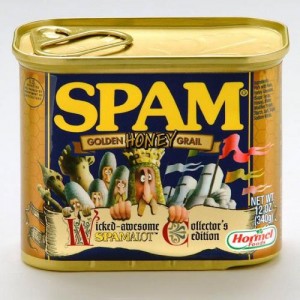 What better way to enjoy your can of congealed moose boogers than with the wonderful artwork of Terry Gilliam of MONTY PYTHON fame! Named, obviously, from SPAM-A-LOT, and just as so from their eponymous sketch from the show, the label depicts some of the most collectible artwork from any can of meat product! I must have SEVERAL!