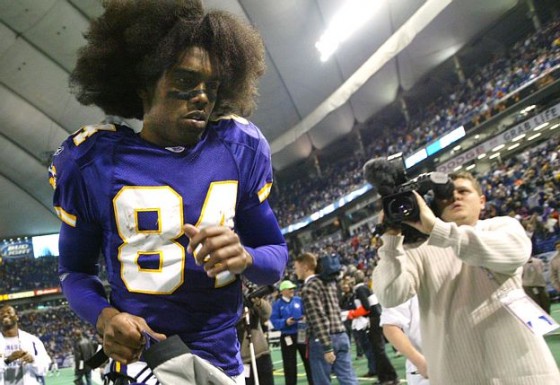 Randy Moss and the Fro

The term “He got Moss’d” will forever be a part of football culture. No player in the history of the NFL was more electrifying than Randy Moss, regardless of position. His struggles last season brought his career to an unfortunate end, but his glory will forever be personified through platforms such as YouTube.

With his retirement comes the heated debate as to who is the second greatest wide receiver of all time behind the consensus pick Jerry Rice. I ask you to watch the following extraordinary clips and tell me that man is not Randy Moss.

Diva or not, Moss backed up any trash talk with speed and a resounding touchdown. He even put notorious loudmouths in their place, and got them to sing him praise as demonstrated below by DeAngelo Hall.

That was just a preview. As these lists always go the following highlights are subjective, but there’s no denying the phenomenal concentration and speed put on display by a guy who was drafted behind twenty other players in the 1998 draft. Enough crotch-riding, let’s get down to business.

Here’s a college clip to whet your appetite. Chad Pennington and Randy Moss is just a cruel combination in a conference like the MAC. Pretty typical corner of the endzone, juggling touchdown catch in the snow from Moss here.

The Green Bay secondary just looks inept on this haul-in by Moss. A display of his quickness and agility as well as his speed.

Clutch throw from Matt Cassel, and Moss capitalized on the small window he was given with a touchdown catch against the Jets to eventually tie the game, leaving one second on the clock.

Really the last big play from Moss couldn’t have been set up any better. He beats Darrelle Revis to the middle of the field, and stretches out for the one-handed grab.

One Handed vs. Tampa Bay
Minnesota

Moss was able to catch his stride to land the one-handed catch in the last clip. This time around he’s forced to stand stiff in the endzone, and reaches straight up to reel in the ball.

It’s one thing to run out of room in the back of the endzone, but Moss showed courage on this play by reaching out over the middle to make the one-handed grab deep in his own territory.

Another clip from his days with the Thundering Herd. He legitimately ran 92 yards for the touchdown after making the catch, meaning this was not a bomb. All Moss right here.

This is the first ever touchdown received by Randy Moss. Must be here for sentimental purposes, right? You couldn’t be more wrong. This catch set the tone for the rest of his career.

Call it smart, unselfish or risky, this is why people love football. Moss had the state of mind to make the difficult lateral to running back Moe Williams after initially making the catch.

The finale here should drop your jaw. Moss beats out the corner and stops on a dime to make the tip-toe catch, all at a very tough angle. The corner probably got a finger on it, pure concentration.