Ten Over The Top Movie Deaths 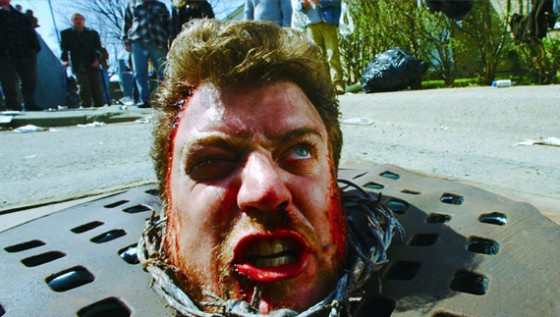 Life in movies is often depicted on a grand scale. Dudes have kick-ass jobs. Chicks live in awesome apartments. Best friends are always supportive. Everyone has great hair. In other words, an idealized or exaggerated vision of the world. This is especially true when it comes to death scenes.

Finding new and creative ways to kill is challenging for action/horror screenwriters. As a result, film demises can be quite ridiculous, whether intentional or not. One would think after 100-plus years of cinema there would be a dearth of outrageous departures, but that doesn’t seem to be the case. 2011 was a good year for WTF extinctions. Here are ten over the top movie deaths from last year.

The Final Destination franchise exists for the sole purpose of killing teens and twenty-somethings in the most horrifying ways imaginable. Decapitations, impalements, eviscerations, implosions, we've seen it all. In the fifth chapter of this enormously profitable series, Candice Hooper shows would-be gymnasts how to properly stick the landing.

Kevin Smith's homage to religious extremism run amok is definitely his most sophisticated movie in terms of visuals and plotting. Taking a break from his dick and fart oeuvre, Smith crafts a compelling piece of minimalist horror that deserved much more praise than it received. The following death is over the top not because it's silly, but because it's totally unexpected and incredibly graphic.

Making a movie about a killer tire is either genius or moronic. You be the judge after watching Rubber. It could be making a statement about man's destruction of the environment, or it could be an excuse to psychokinetically explode people's heads. Whatever the case, poor little Peter Cottontail doesn't stand a chance.

Scream 4 was the most unnecessary horror sequel since, uh, Scream 3? Its only saving grace is a wonderful cast of delicious hotties that includes Alison Brie, Anna Paquin, Kristen Bell and Hayden Panettiere. While most of the kills are garden variety stabbings, the one featuring Deputies Hoss and Perkins stands out for being all kinds of extra goofy.

Sean Bean + medieval setting = agonizing death. It's been well documented that Sean Bean, like cops, never seems to make it out unscathed in movies. Not only that, but his dismissals are usually of a tragic and/or violent nature. Take Black Death for example. Feudal England really knew how to whack guys.

Did we really need a prequel to The Thing? No. And based on box office receipts, audiences agreed. It had its moments, but there wasn't much in the way of character development and they totally lifted the ending from The X-Files movie. As for the special effects -- not awful by any stretch, but certainly over the top and chock-full of needless sexual connotations.

Drive is a badass flick. Ryan Gosling looks and acts like a legit movie star. The soundtrack, editing and cinematography are top-shelf. And the violence unapologetically pulls no punches; the much talked about elevator scene being proof positive. It perfectly encapsulates the dichotomy of men: we love big and we kill even bigger.

Gather around, folks. It's time top watch the game show that's sweeping the nation: STAB CAB! Three serial killers enter a taxi. Only one will escape alive. Which one will it be? The drama. The anticipation. And the blood... oh, the copious amounts of blood. It's fun for the whole family. So grab some popcorn and Goobers because it's about to get crazy up in this car, yo.

Ever since Fargo, wood chippers are seen in a whole new light. They're not just for producing pulp anymore. No, they also serve as excellent devices to mangle and liquefy human bodies. Tucker, played by the great Alan Tudyk, is just trying to get some work done on his "vacation" home. But those nosy college kids won't leave him alone. This leads to a gruesome oopsy.

1. Manhole – Hobo With A Shotgun

Picking out only one over the top scene from the gloriously bloody Hobo With A Shotgun is no easy task. The entire movie is 85 minutes of unadulterated "grindhouse" gore. Heads are smashed. Necks are sawed open. School children are set ablaze. It's so damn ridiculous you can't help but laugh. The first death sets the tone though: a nasty beheading coupled with a stripper dancing in a shower of blood. Yeah, that's the definition of over the top.