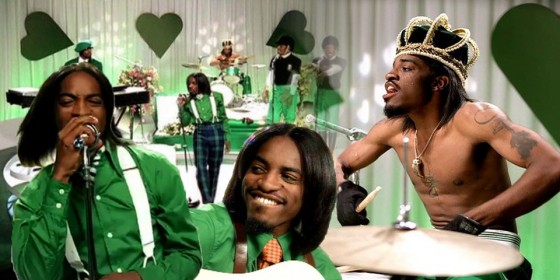 Some of the coolest music videos ever were those featuring phony concerts. What I mean is, not actually concert footage, but videos made to look like they took place in front of live audiences. There are a bunch of these, actually, but I think these ten represent the very best of the bunch… and a few different genres, too! Something we can all enjoy! Happy listening!

This little ditty takes place in a ‘Fun House’, as though that ‘Fun House’ were created by Stephen King. The band is supposedly entertaining the masses at the ‘Fun House’. And no, I will not stop quoting ‘Fun House’.

This is the Foo’s first big hit that launched them into awesomeness, complete with a video that completely makes fun of those irritating Mentos ads. The last part of the video — as it is in the Mentos commercial — takes place at a fake concert.

Well… it’s a venue, at any rate. Granted there’s no one there. I like to think of it as a sound test, maybe. Look, it’s a cool song so just go with it.

Not only is this one of Al’s finest parodies in general (it’s the entire movie without having to actually watch it), but the video does a fine job of ribbing Don McLean, too! Al is a GOD.

This song is gonna be stuck in your head for the rest of the day. You’re welcome.

5) The Wonders – That Thing You Do

Okay, so technically this is taken from a movie about a band that performed in front of audiences. But the actual song and singing was done by members of Fountains of Wayne, and the band was fake. It counts. So there.

I love this song. It has a little bit of everything, including a concert that never happened!

Sad it took this long to hit number one status, but I suppose that’s not what The Dead were about. This concert is damn cool, featuring far more skeletons than normal.

This, too, is a video with a bit of parody involved. Basically, it’s the Peppers mocking every style of music they can over the course of the video, all in front of a non-existent crowd.

They probably didn’t do it first but in my humble opinion, they did it the best.