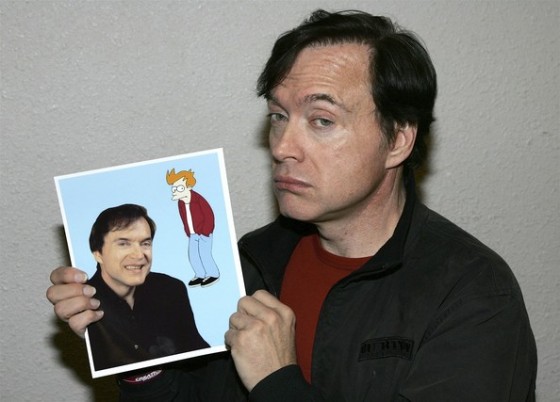 Everyone remembers Mel Blanc. Without his expert voice-overs for nearly every Warner Brothers cartoon ever, there might not have been the influx of exceptionally talented actors we have today. Voice-over acting is as much an exercise in insanity as it is an art form. It takes some folks years to perfect their craft, and others are just so natural that the voices are mere shadows of their own. But any way it comes, voicing cartoons is a special talent, and these ten performers have provided the voices for some of the most well-known animated characters in the last twenty years.

Most Beloved Character: Probably HBO's Flight of the Conchords as the stalker/fan Mel, but Louise is a close second.

Most Beloved Character: Phineas and Ferb's Perry the Platypus.

Toons He's Voiced: Drake from the Crusaders of Might and Magic video game, John Grayson from The Batman TV series, Alien X from Ben 10 Alien Force, Captain Sunshine from The Venture Bros.

And just for fun and contrast, here's Mark Hamill as The Joker:

Most Beloved Character: A tie between her role as Mom on Futurama and Agnes Skinner on The Simpsons.

Toons He's Voiced: Barbados Slim and Elzar from Futurama, The Joker from Batman: Under the Red Hood, General Grievous on Star Wars: The Clone Wars, Gorilla Grodd from Batman: The Brave and the Bold.

Most Beloved Character: A tie between Jake from Adventure Time and Futurama's Bender.

Toons He's Voiced: Nearly every background voice not provided by Seth himself on Family Guy, as well as any celebrity voice they couldn't actually get.

Most Beloved Character: Probably Adam West on various projects, including to West himself. Otherwise, his myriad of voices on "Hollywood Babylon" on Kevin Smith's SModcast Internet Radio podcast.

Most Beloved Character: A group tie between his many roles on Futurama: Fry, Professor Farnsworth, Dr. Zoidberg, and Zapp Brannigan.

Check out our two part interview with Billy West on The Gunaxin Show! Part 1 – Part 2