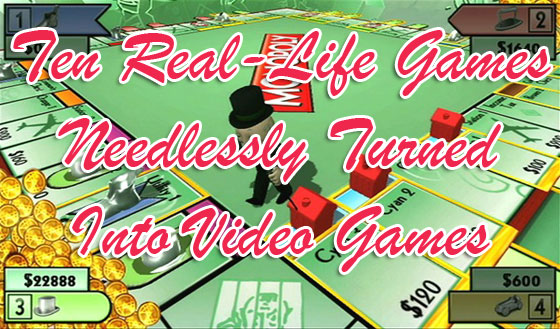 Since the popularization  of the video game back in the mid-70’s, there have been approximately 85 kajillionbillionmillion games made for 435 gagillion different systems (give or take).  Not all of them were necessary, to say the least.  A truly great game should allow you to escape to a better world than the one you lived in, not remind you of the crap you see in everyday life anyhow.  Sadly, the games that make up today’s subject do just that.  These are games you can easily play in the real world, many times by simply opening up your closet door and clearing up some table space; for some reason, they have been translated to the video game world.  Badly translated, by the way.

Playing Monopoly on your video system is really only useful if your real-life dog eats the little metal dog you use to go around the game board.  There are tons of Monopoly video games, and they’re all the same.  Press a button to roll the dice, and then the little man with a top hat tells you what you can and can’t do.  Sometimes, if you picked a version with particularly frisky game developers, he insults you.  Really, if that’s what you wanted to make your Monopoly experience all the more fun, you could’ve just hired any of us.  We’re cheap, we’re always on time, and we’re experts at making fun of your latest feeble attempt to buy Boardwalk from you opponent in exchange for two railroads and a Get-Out-Of-Jail card.

The worst part though, is none of the video game versions have the cool themed Monopoly’s that you can buy as gag gifts that nobody laughs at.  If the Wii released Star Wars-opoly, or Family Guy-opoly, or Frisky-Old-People-opoly, they might just have our fifty bucks. 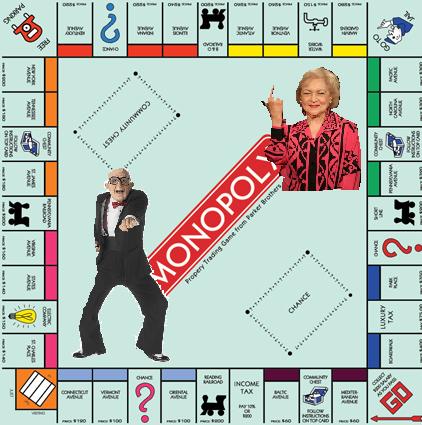 Playing at home is fine.  Playing at a casino is fine.  Playing online is fine.  Playing through X-Box Live is fine.  The problem we see is when people feel the need to indulge in single-player, offline video versions of poker.  Basically, you’re playing the computer, who can pretty much beat your ass whenever it feels like it and you wouldn’t know.  You would just think you had a bad hand when it’s really the CPU equivalent of hiding five aces in your sleeve until you need them.

The bottom line here, is if you don’t have real-life friends, and can’t find a live game to play at a bar, you are faced with the choice of online poker or video game poker.  One is as easy to pick up as the other, yet single-player video game poker has actually sold copies.  This has to be a sign of the apocalypse.

And if regular poker in video game form isn’t a sign, then certainly the fact that video game strip poker exists has to be.  It’s a good fit because chances are, if you’re playing a strip poker video game, you’re already naked.  All the time.  Because you never leave the house.  Ever.  Also, you don’t deserve to be naked. 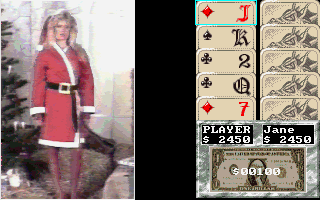 Peek-a-Boo Poker, coming soon to an incredibly sad house near you.

The best part of knowing Trivial bloody Pursuit is on various video game systems is looking around and finding the newest version on PS3.  Mind you, the PS3 is one of the most complex and powerful gaming systems ever created.  And it’s hosting Trivial Pursuit.    But hey, the wedges are really flashy this time!

It’s exactly what you think it is.  Answer the right questions in the right square, and you win a wedge.  Gain six wedges, go to the center of the board and answer one final question.  Get it right, and you win.  When this version came out in 2009, it required a $400+ machine to do all this.  But it’s the ideal situation if you really want to play Trivial Pursuit but don’t want to be bothered with that pesky pick-up-the-card-and-read-the-question part.  What a burden. 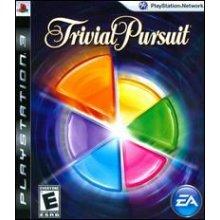 The puzzle craze of the late 2000’s, Sudoku can be found literally everywhere.  Newspapers, magazines, books, cell phone apps, clothing, toilet paper, children’s bath toys, tattoos; you name it, you can probably sudoku it.  A quick Google search for “Sudoku tombstones” brought us nothing, but you know that’s coming sooner or later.  If your life is sudoku, so should be your death.

Point being, sudoku rules the world.  So why in the blue hell anybody feels the need to purchase it in expensive video game form, one can never know.  Perhaps it’s the public’s general apathy toward anything with a paperback cover and words (in this case, numbers) on pages.  Perhaps the average gamer ran out of good games finally and still can’t bring himself to live life beyond the TV screen.  Or perhaps the simple fact that you can stick a pretty girl onto anything and people will buy it. 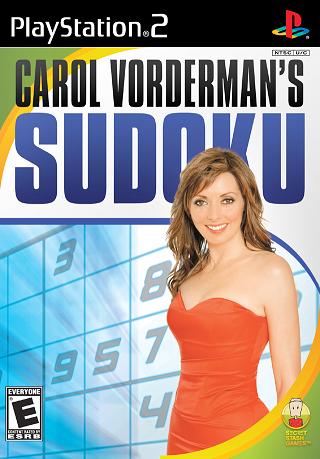 It’s ridiculous to buy a sudoku video game; if you really want a quick sudoku fix, all you have to do is buy a local newspaper.  It costs a buck, two on weekends; won’t set you back much either way.  There’s no reason to spend 40-50 bucks on an electronic version of that.  What’s next, a video game version of Junior Jumble? 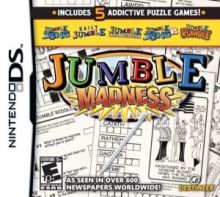 Candy Land and Chutes And Ladders 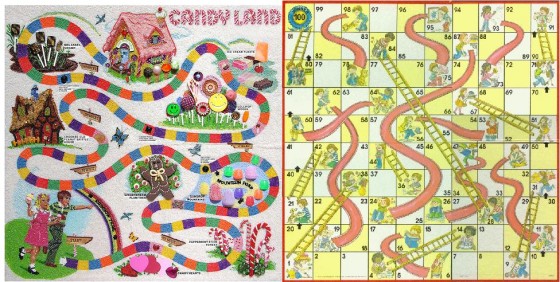 We’re lumping the next two segments of this list together, because they’re basically a package deal in life.  Like Hall can’t survive without Oates, nor peanut butter without jelly, nor socialite celebutantes without Satan, Candy Land cannot hang alone at home.  It is almost always equipped with Chutes and Ladders, and when nostalgia sets in, and people look back on the games of their childhood, the two are always lumped together in the same sentence.

So, when it came time to release pointless video games based on the two, it was only natural that they be grouped together in the same package.  But that’s beside the point; the point here is that if any games should never become a video game, it’s these games.  Kids start playing them when they’re four and grow out of them when they’re five.  After that, they should be able to play a real game with something resembling coordination, and these two games become useless.  They’re ultimately pointless games that require no skill whatsoever, rely totally on the luck of the dice roll, and kids have no patience for that as they start to grow.  When they grow up and discover lottery tickets, however, they’ll suddenly be quite cool with the idea.

Regarding Chutes and Ladders though: if you truly can’t get enough of going up ladders and going down slides, there are online programs that let you design your own board.  What a relief; too many people have mastered randomly navigating the board thanks to a random chuck of the die.  We crave a Chutes and Ladders game for REAL MEN. 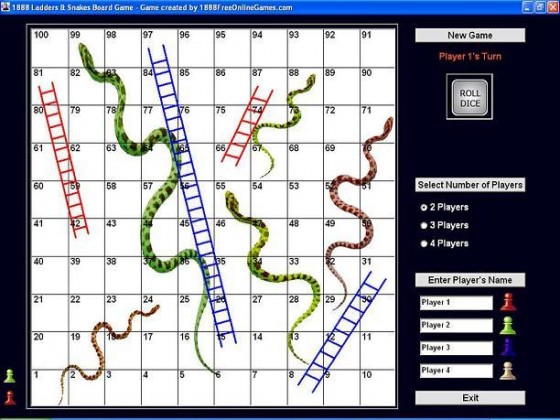 The definition of manly: using a snake as a slide.  They don’t mind.

Clue has been a board game, a book series, a movie, and has had a children’s version released in case Mom found hitting somebody with a candle too violent for little Johnny’s virgin eyes.  So why does it have to be a video game?  And if you must do a video game version, why not a radically different angle?  It could’ve easily been an adventure game; you have with six weirdos, who always wear clothing related to the color in their last name, stuck in a house with a dead body, all trying to figure out who killed him, or else attempt to throw the blame elsewhere.  Y’know, a real video game. 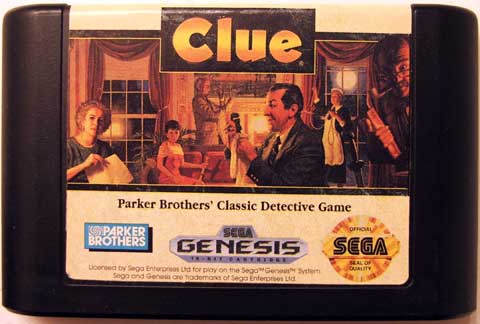 We didn’t get that.  We got various sometimes-pretty-sometimes-not electronic versions of the board game.  Go to this room and then that room, eliminate person-place-thing combos based on clues, find the killer.  And that’s it.  And yet, instead of opening the closet and dusting off the actual board game, people paid $50 for a cartridge version.  Who killed the board game industry?  It was the gamer, with the credit card, in the electronic store.

OK, so you’re weak.  We get that.  You’re probably not going around town all willy-nilly challenging people to arm-wrestling contests, so perhaps a video game version of the activity is perfect for you.  Well, you’d be wrong, for two reasons. 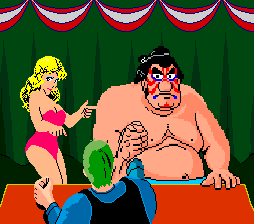 For one, look at that screen.  That’s the whole entire game.  Press A fifteen billion times and you eventually win.  That’s really all there is to it.  They tried to spice things up by adding goofy-looking Punch-Out style characters as your opponent; but you could be facing a thirteen-headed-red-and-purple-polka-dotted-fire-breathing-duck, and it wouldn’t change the fact that you’re still pressing A fifteen billion times as a substitute for playing a real game.

Reason number two: video game arm wrestling still can hurt you, if you play the right version.  An arcade game in Japan where you arm-wrestled a machine was responsible for at least three broken arms before the game’s developers pulled it off the shelves.  Of course, the situation being as absurd as it is, the developers just couldn’t let it go without a dig or two at the victims and their now-busted 24-centimeter-pythons.  Brother.

“The machine isn’t that strong, much less so than a muscular man. Even women should be able to beat it,” –Atlus spokeswoman Ayano Sakiyama.

Ouch.  Those three wanna-be arm wrestlers are probably nowhere near her to-do list. 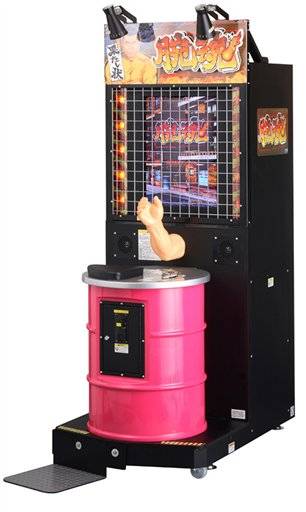 Maybe they should’ve stuck to pressing A

“Awesome, bro!  Now I can enjoy the total awesome fun of beer pongin’, and I don’t even have to play pong!  Or drink!  Or meet girls…or anyone for that matter…just me and my Wii…bro, this sucks.” 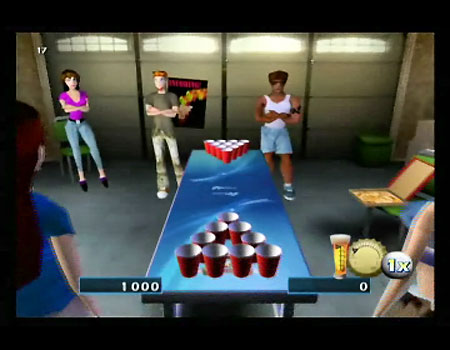 While we’re all aware that the first popular video game, Pong, was little more than a primitive ping-pong game, that’s still no excuse to base a whole other video game around the frat boy version of pong.  Given that the whole point of beer pong is to get drunk and make other people drunk, having a Wii version is beyond asinine.

It becomes even more asinine when you take the beer out of the equation.  Somehow, the idea of a beer-pong themed video game offended a few parents and politicians, who argued vehemently that it would lead to desensitization of drinking and cause more drinking, more drunken driving, and more death.  We here at Gunaxin who mind you, have an entire sub-section of our site devoted to beer, would argue that there was never anything to worry about, since nobody in their right mind would have ever played this stupid game in the first place.

Regardless, the game developers covered under pressure and removed the beer elements.  Now the poorly-drawn cartoons play Pong using vague, unexplained liquids.  Might be water, might be milk, might be something completely different.  It really depends on how much booze they’ve had off-screen.

Yes, Waldo.  The infuriating book series that pissed you off as a kid and pisses you off even more as an adult was actually a video game.  This was great news for people too lazy to pick up a book and…stare.  That’s literally all you did with Waldo.  You stared, hopelessly searching for a little man in a red-and-white striped outfit hanging out in a sea of a hundred thousand people.

Even better, it was an NES game, so we got to search for Waldo in a sea of tiny 8-bit graphics with no definition whatsoever.  Can YOU find Waldo? 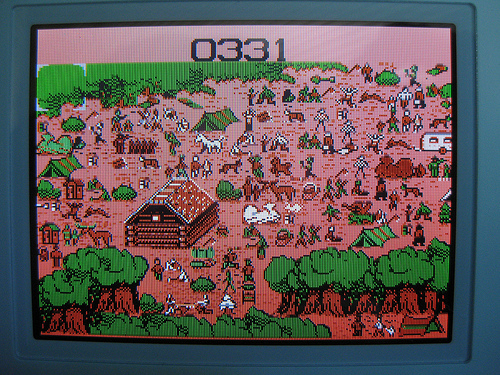 SPOILER ALERT: no you can’t

Really now.  We’re all for a challenge from our video games, but this is beyond anything that we’d consider even remotely acceptable.  EVERYTHING on that screen looks like Waldo.  Even the tents and trees.  Any of them could be Waldo.  Hell, there’s a good chance NONE of them are Waldo, and the game creators were yanking our cranks the whole time.  The nerve of some people!  Almost makes us want to pick up a book.  Almost.