Humor > Lists > Ten Spiders That Will Give You Arachnophobia

Ten Spiders That Will Give You Arachnophobia

Though for me, the real cringe-inducing ‘bug’ is the bee (I’m allergic and they’re always trying to kill me), I will fully concede any and all spiders are so heinously evil they just have to be part of a bet God lost to the Devil. I’m guessing God got to pick parts out of the Devil’s junk drawer to make one last animal, and God was like, “If what I make has a duck beak and a beaver ass, you can make the most creepy-crawly thing you want!” God, of course, makes the weird-ass platypus so the Devil is all, “Spiders, bitch. Choke on that!.” God sulked, but ultimately was like, “Fine… at least spiders can be stomped on.” Anyway, where was I?

Oh right, spiders. The only thing cool to come out of spiders being around is Spider-Man, and even he’s had some questionable moments (Scarlet Spider? Disco Parker?). Spiders are eight legs of pure, unadulterated nightmare-turn-reality and are everywhere you hope they aren’t, all the time. In a slipper? Right at the toe, son. Dangling from the ceiling over your bed while you sleep? Oh, absolutely! Big enough to consume entire birds! Yep. Spiders, man… what the Hell? Well, here are ten spiders that might just give you arachnophobia.

As far as ugly-ass spider-looking things that aren't actually spiders go, this fucking abomination takes the cake. The Sulifugid is a type of arachnid, but not a real spider, which in all actuality makes no difference because these things are 'from the depths of Hades'. They live in arid desert-type regions, which is precisely why we've seen so many of them on the web over the last few years. Soldiers in Iraq and Afghanistan (both well-known desert-type areas) send them home, scaring us all under our covers for sweet, sweet shelter. Evidently they're not poisonous or even particularly aggressive toward humans, but neither are unicorns. I don't know what that means. 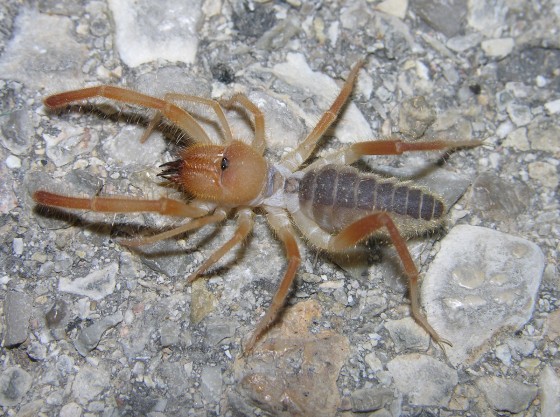 The name 'Orb-Weaver' in the spider world covers a vast variety of creepy, gag-inducing eight-legged monsters. But this particular sub-genre, or whatever -- I'm not a spider scientist, you know -- is especially horrific because it has massive horns jutting out of its body like some kind of Barkerian Hell-Demon. Fitting nicely in the incredibly long named genus Gasteracantha, the Spiny Orb-Weaver is another one of those beasties that looks far worse than its bite (even though it can bite, let's not kid ourselves here) and can, sometimes, reach diameters of 30mm (roughly the size of a half-dollar). Imagine one of these little shits falling out of some jungle tree into your eye! Moving on... 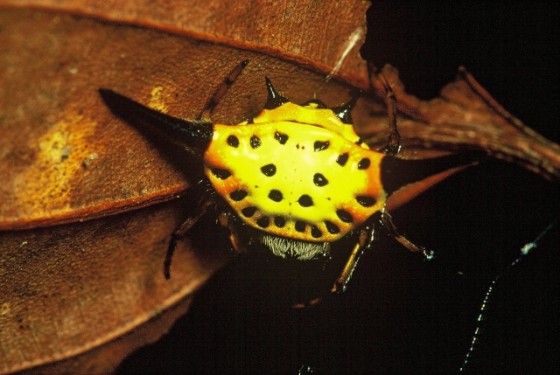 One of the main attributes/horrors of many of the Thomisidae (or crab spiders) is their ability to blend into foliage and leap like a tiny alien onto unsuspecting prey. Like your face when you bend down to smell a pretty flower! Right into your open nostril! That's what you get for enjoying nature, stupid! So called 'crab-like' because they tend to scuttle left and right, much like a crab, and because they get real pissy like a nagging wife! Okay, I made up that last part. In fact, these critters are more likely to shy away from humanity than leap forth and chew your face off. Which is good, cuz I like my face with as few spider bites as possible. 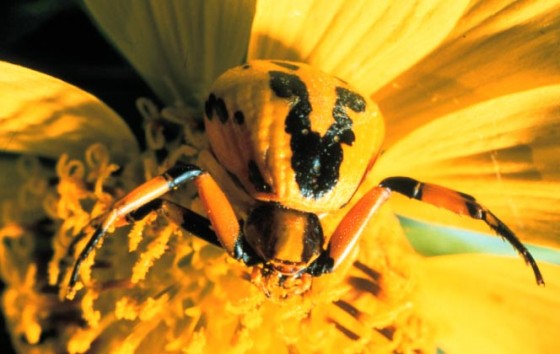 This repugnant stain on Mother Nature's credibility list is, in fact, not a spider. However, it will, with monstrous regularity, kill big spiders (like the wolf variety), drag them to their nests, repeatedly sting the fuck out of them, and lay eggs all over their paralyzed bodies in order to feed its young. What kind of joke is this? This kind of shit can't happen on an Earth that God has control over... can it? It can and it does. I'm pretty sure God just turns his back, ignores it, and fights down his rising gorge. Anyway, as much as I detest spiders, no living thing should suffer the injustice that this fucked-up wasp offers. It's just... wrong. 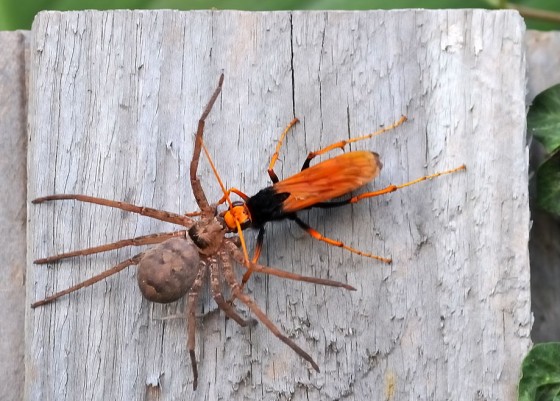 When is an otherwise innocuous spider who spins an ordinary web twice as repulsive? When it takes that very web, fashions a net out of it, and chucks it at its victims! Seriously! This particularly brilliant species of arachnid (Deinopidae, in case you're wondering) has better knitting skills than a dirt-shop full of migrant workers. It literally makes the most awe-inspiring game of Cat's Cradle with its comical and wretchedly elongated legs, waits all stealthy-like, and slings itself -- along with its hammock of peril -- right at its prey. And its completion percentage? A lot. And that's a lot. Oh, and this thing also goes by 'Ogre-Faced Spider', just in case your nightmares weren't full enough for the evening. 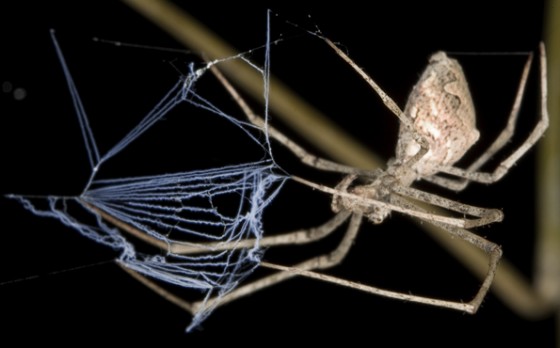 Don't think a spider can fish, eh smarty? Well, not only are you wrong, but you're all-kinds-of-terrifyingly-hideous-spider wrong, sparky! In the family Pisauridae lie the genus Dolomedes (which already sounds really similar to Dolomite, and therefore rife with kick-assery). Dolomedes rely on their epic fishing skills, which also happens to give them these other nicknames: raft spiders, dock spiders or wharf spiders, which right away puts them in frighteningly close proximity to people. They can achieve ridiculous sizes ranging from 1 to 3 inches (c'mon, that's huge!) and eat stuff like, unsurprisingly, fish. Also they're gross. 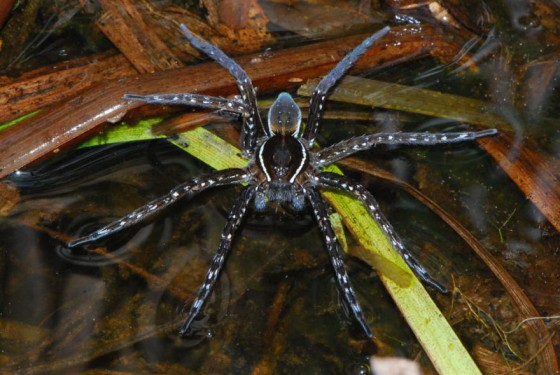 As this particular spider's name implies, the Salticidae can launch itself through the air at bugs, other plants, and your hair. It's mainly because these spiders have incredibly acute vision, often with greater ability than most invertebrates. And that, in and of itself, is ferociously scary. The last thing I need is a spider sitting a few yards away eying my tenderness that can, at a moment's notice, fling itself all ninja-like at my person and get around hanging off my earlobe. Granted, they are pretty small, for the most part, but small things can inflict a lot of damage. Have you ever been around children? 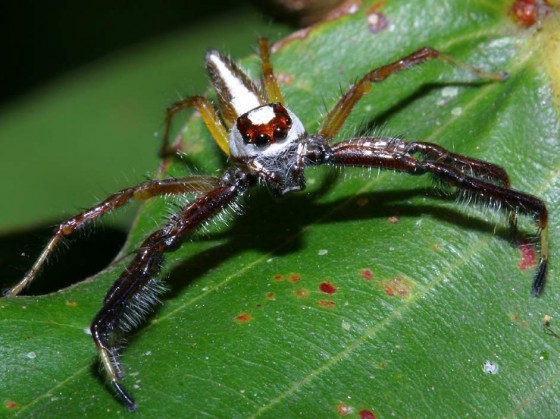 This sentence alone from Wikipedia ought to be enough to make you pee a little: "Sparassidae (formerly Heteropodidae) are a family of spiders known as Huntsman spiders because of their speed and mode of hunting. They also are called giant crab spiders." Giant crab spiders? GIANT?? I don't like where this is going. Yeah... I had a feeling this wasn't going to end well. They can grow nearly a FOOT around. If I still had a blanky, now would be a great time for me to find it. (On an unrelated note, I still have a blanky.)

Did I mention they have been known to bite? Again, let's let Wiki tell us how bad things are: "The effects vary, including local swelling and pain, sometimes with nausea, headache, vomiting, irregular pulse rate, and heart palpitations, indicating some systemic neurological effects, especially when the bites were severe or repeated." *runs away and hides under mother's skirt* 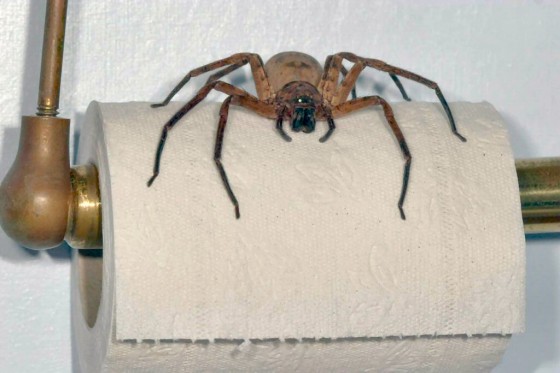 Oh for the love of God, you have to be kidding! Anything in the animal kingdom with the words 'giant' and 'something-eating' in its name is already on my 'stuff to always avoid' list. Nothing cute has a name like this! Huge Pudding-Eating Wollybear? Never. See what I'm saying? Anyway, this spider (the Theraphosidae, ya know) is considered, in terms of actual body size, the largest spider on Earth. And it can grow to roughly the size of a Frisbee.

For size comparison, open your hand all the way, now put it right up against your face; that's just the body coming at you! The legs are wrapping around your skull just before it sinks its clothes-hook-sized fangs into your neck! AHHHHHHHH!!!! It also eats whole birds, just in case you want to throw a few at it while it stalks you through your basement.

Well now, this little fella sounds almost... innocent. It wanders around, all Obi Wan-like, probably helping lesser spiders learn the ways of ancient spider arts. Also it's Brazilian, and we all know the best things that come out of Brazil are amazingly scantily clad chicks, right? So how bad could this... oh. Oh, I see. It's the most poisonous spider on Earth. Hmm. Well that's not good, is it?

So the Phoneutria is not only more poisonous than a hundred vials full of poisony poison, but they're also highly aggressive. Which basically boils down to this: if you see it, it's already seen you (what with its six eyes) and it's well on its way to killing you and everyone you love. Cuz that's how they roll -- Spider Mafia Style. You suck, Brazilian Wandering Spider. 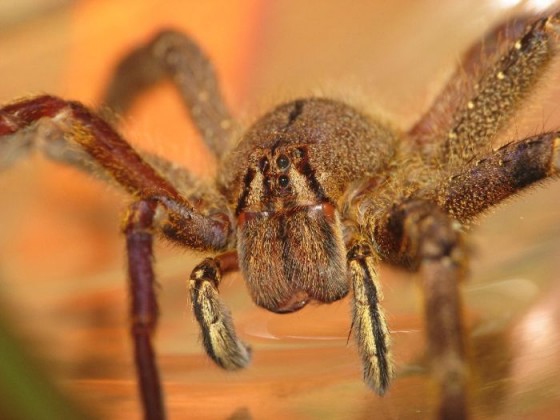