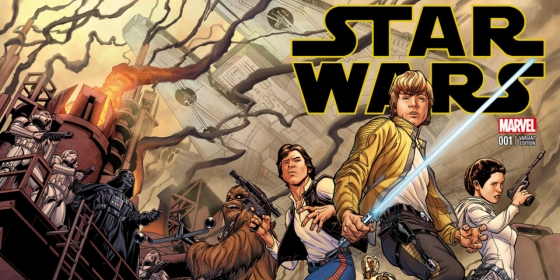 Star Wars Comics relaunched with Marvel in 2015, and generally have been very well done and successful. They are modern books though, and quite different from the Star Wars Comics of old… 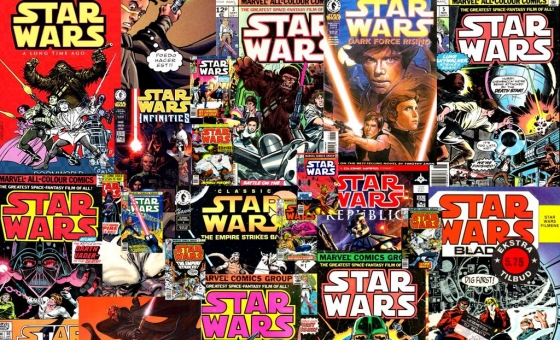 When Star Wars hit the screens in 1977, Marvel Comics was given the opportunity to further the story of the titular heroes in any way they saw fit. But, since Lucas hadn’t really told Marvel what plans he had in mind for his own canonical continuation of the Star Wars saga, what came out of the imaginations of the comic creator’s minds was borderline ludicrous.

Or was it? In some circles, these original comics introduced the readers to masses of bizarre aliens, storyline tangents featuring Han, Luke, and Chewie that otherwise weren’t likely to be told, and outrageous sub-plots that really didn’t go very far. Conversely, to some, these very reasons were precisely why the comics were ridiculous and downright terrible. So let’s take a look at ten examples of very early Star Wars stories that, one way or the other, will survive in infamy. 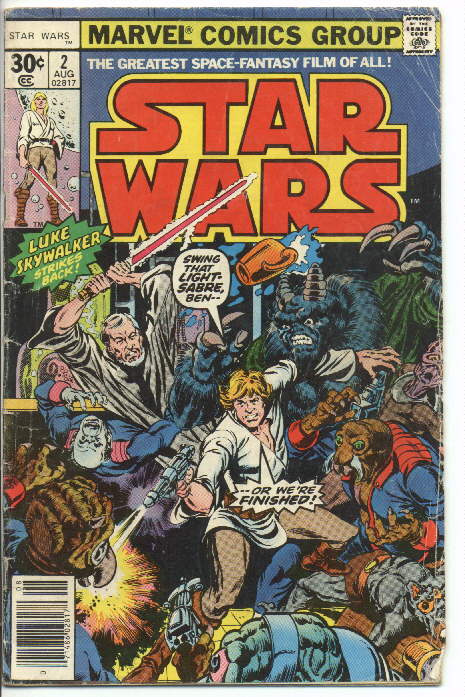 This first offering takes place right after A New Hope hit theaters (the second comic in the series) and it features Obi Wan… inexplicably, and Luke fending off a slew of aliens, possibly in another Cantina-like environment. First off, let’s take a look at Luke: buff, confident, stolid… everything Luke wasn’t throughout the entirety of the film. He was a sullen, morose dreamer with enough teen angst to fill the whole galaxy. Oh, and hey! It’s Ben… who is dead. Yeah, this one still stumps me. Apparently some of these stories occur simultaneously with the movie. Moving on. 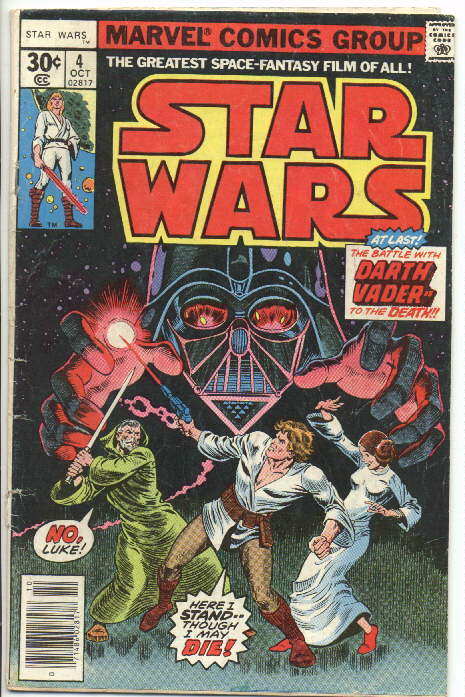 Well I suppose one can assume that’s Obi Wan and possibly Luke — who’s waxing philosophical about his dramatic place in time — and Leia here has a pair of really snazzy red shoes… Okay, I fold. What the hell is happening here? It’s not even the fact that, once again, this story must take place at some lost point within the original film — I guess I can buy that. No, it’s just the crazy distribution of characters (who might be the heroes) on the cover. Oh, and Leia looks like she’s all up in ‘da club’. 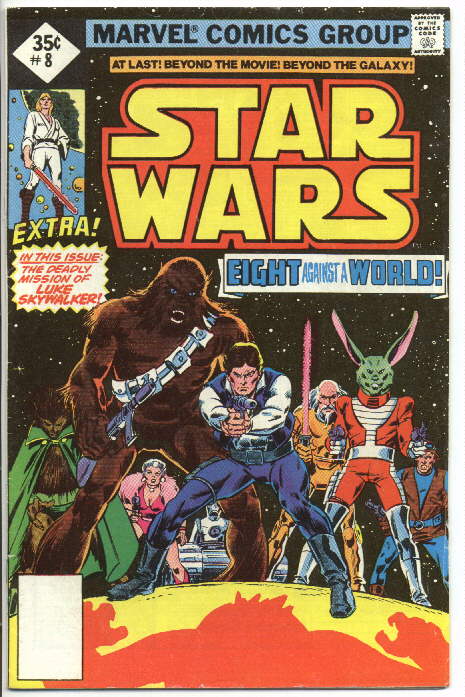 So, we have one Ancient Disco Queen in the back there, a rabbit who is also an X-Wing pilot (oddly the least bizarre thing about this cover), Zardoz the Jedi back there (look it up), and is that C3PO in something with treads on it? This is less a Star Wars story and more a completely fabricated mess of a sci-fi tale where a group of characters are literally drawn from a hat! But we are talking about a Lucas-veneered world, so nothing surprises me at this point. 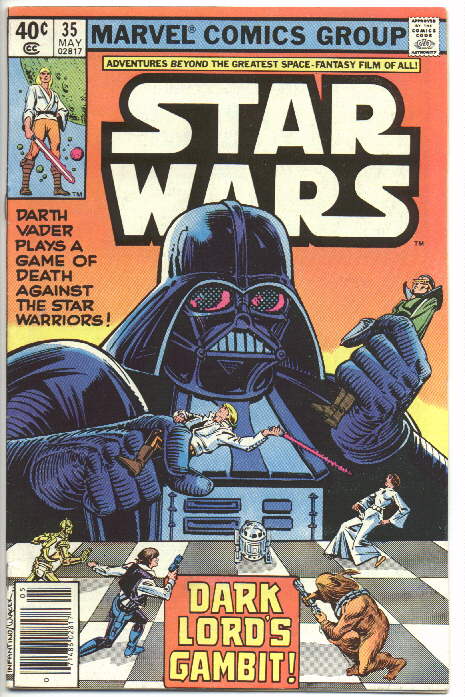 “Darth Vader plays a Game of DEATH against the Star Warriors!” That is literally what that says. I have nothing even remotely interesting to add. Other than this: Star WARRIORS? Really? 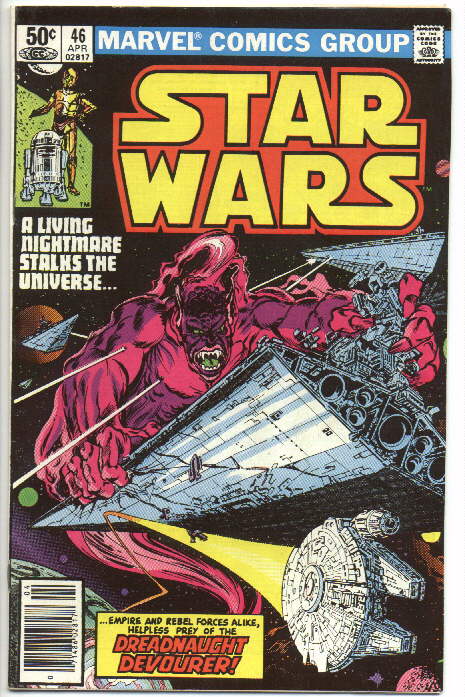 In this wonderful issue where this particular cover seems to have nothing to do with what’s happening inside, Lando and Chewie search for Han Solo who has been captured by Boba Fett, when they inadvertently fly through a big tear in space and end up meeting some old Rebel sympathizer who is now a God. Wow. Heavy. 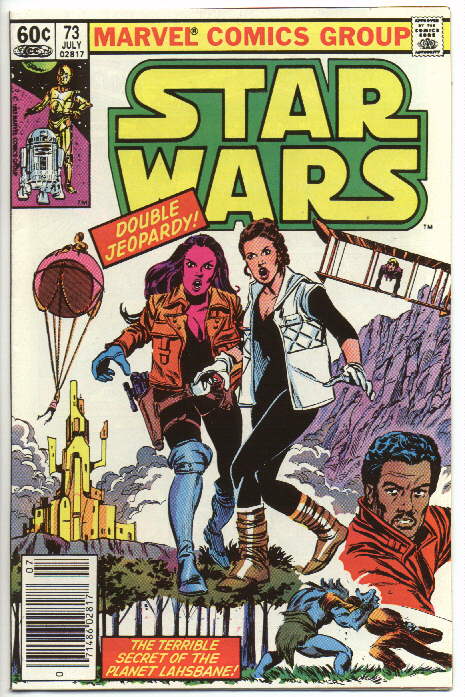 I couldn’t locate a synopsis of this comic, but I have to admit the cover looks like an insipid ’80s movie that starred someone like Dirk Benedict or Miles O’Keeffe. And frankly, I honestly don’t care what’s happening to Leia or who she’s with (post-Empire Strikes Back, by the way. You can tell by the date and the fact that she’s no longer only wearing her white nightie outfit), but I do care about what’s going on with Chewbacca down there. That alien he’s fighting is huge! If there’s one good thing about these comics — and I’m not saying there is — it’s definitely the fact that we got to see Chewie fighting a lot. In the movie he was just a big, loud puppy. 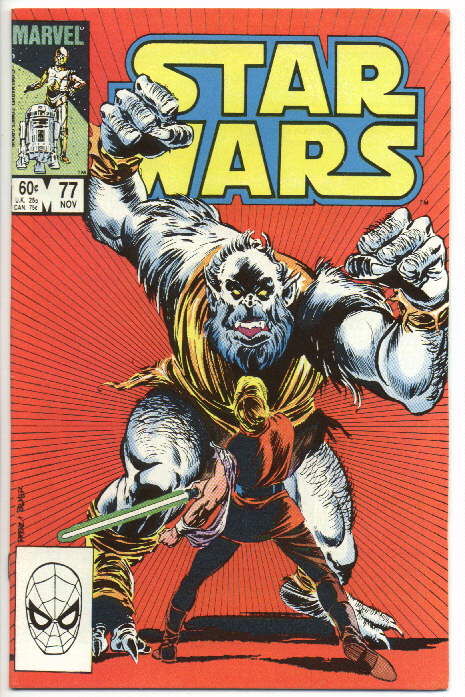 It’s common knowledge that the Lightsaber can, at will, sever limbs and render your attacker pretty much useless. It’s happened quite a few times, actually. What we have here is a case of a giant monster poised to stomp the ever-loving snot out of Luke who is, as we can plainly see, wielding said Lightsaber. So what’s the problem? Is Luke blind? Possibly he is a chicken-shit? Maybe that’s not Luke? I don’t know. But what I do know is this comic should be over in one page. Lightsabers: good for killin’. 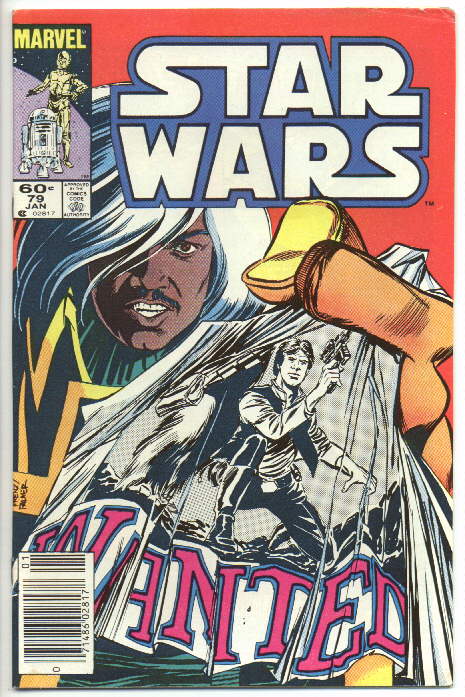 The fellow on the cover here, who is grasping the WANTED poster of Han Solo, isn’t Lando. Trust me. Lando may have been the token (see: only) black guy in the original trilogy, making it nearly impossible to mix him up with another guy, so it stands to reason that, since this guy has cascading silver locks, he is not Lando. He is, however, some kind of sinister Doppelganger of Lando. And his name is… Drebble. That is seriously all I know about this issue. It’s hurting my brain even thinking about it. 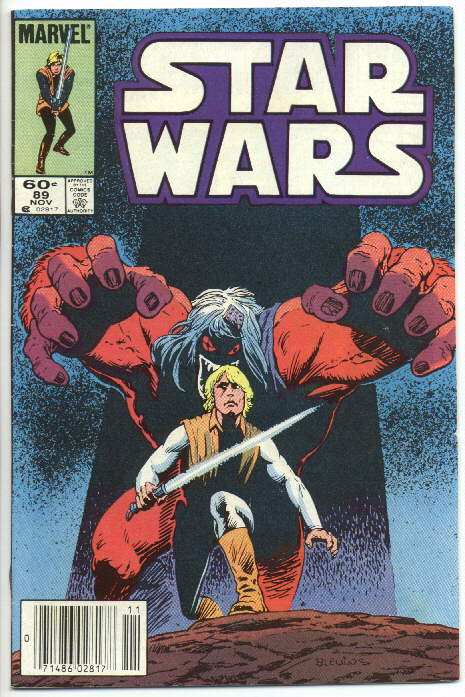 Look out behind you, Luke! It’s a mop-haired, bright-red Kabuki Monster! And remember NOT to use your Lightsaber effectively! 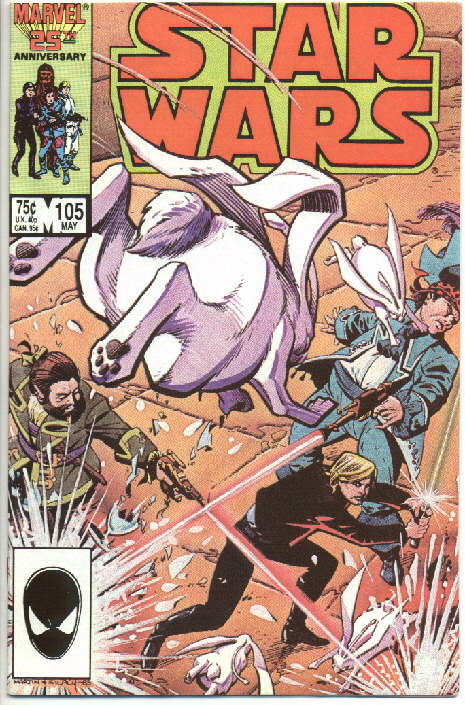 They must be on Caerbannog.