Ten Things Sean Payton Can Do During His One-Year Suspension 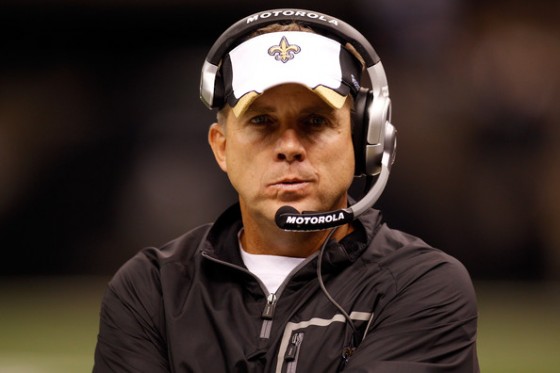 WOW. That was my reaction to NFL Commissioner Roger Goodell’s punishment levied against the Saints franchise, head coach Sean Payton and ex-defensive coordinator Gregg Williams. Whatever the opposite of a slap on the wrist is, that’s what Rog handed down. The team fined $500,000 and docked a pair of second-round draft picks. Williams suspended indefinitely (possibly for good). Payton suspended sans pay for the entire 2012 season. Holy sh*tballs! That’s what I call sending a message.

Who knew slipping fat envelopes of cash to defenders for delivering “knockouts” and “cart-offs” was frowned upon? Who knew purposely targeting quarterbacks like Brett Favre and Aaron Rodgers was in poor taste? Who knew– wait a second, EVERYONE WITH AN OUNCE OF COMMON SENSE KNEW THAT WAS WRONG! Oh well, I’m sure it seemed like a good idea at the time.

Now Sean Payton has a whole year to sit in the corner with a dunce cap on, pondering why he lied about shutting down and then even knowing about the existence of a “Bounty Program.” I’m sure he’s feeling really low right now, so I took the liberty of concocting some suggestions of how he can pass the time on his during his length vacation.

10. Enter a Tobacco-Spitting Contest – Payton has been known to gnaw the chaw. Given the proper training, he could find an excellent hobby to keep his competitive juices flowing.

9. Break his other leg – Perhaps it will be enough to garner sympathy. Probably not, but it’s worth a shot.

8. Play a lot of Grand Theft Auto – The infamous video franchise not only expects you to celebrate and reward violent acts, it encourages it.

7. Write a book – A tell-all tome about his role in Bountygate would be a must-read. If there’s one thing America loves, it’s profiting from a public embarrassment.

6. Become a WWE manager – Do pro wrestlers still have meddling managers like Bobby “The Brain” Heenan? If not, Payton could shine as a lying, cheating duplicitous heel.

4. Do a lot of apologizing – That’s what celebrities and figures of note do when they royally screw up. He doesn’t have to mean it, but he should at least sound convincing.

3. Make inquiries into coaching the Raiders – Once Dennis Allen gets canned during or after next season, Oakland will once again be in the hunt for a “Just Win Baby” kind of coach. Payton obviously believes in winning at all costs, so it’s a natural fit.

2. Devise a new and improved Bounty System – One that awards hugs and kisses for clean hits, rather than stacks of cash for dirty ones.

1. Volunteer to be a tackling dummy – Payton used to play quarterback, but that was a long time ago. Evidently he’s forgotten what it feels like to be smashed in the head, chest and legs by a ferocious defensive player. A quick refresher will do him some good.