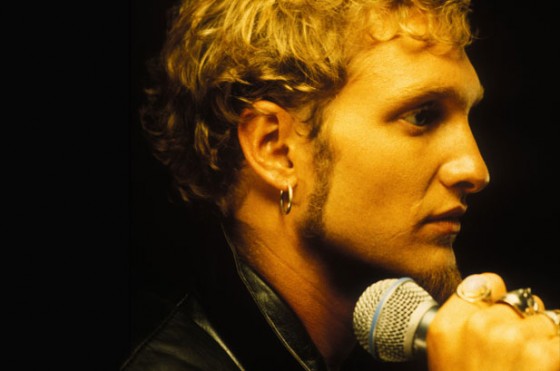 Eight years ago today, Layne Staley was found dead from a drug overdose in his Seattle condo. His withered remains lay undiscovered for two weeks. He was 34 years old. Just another casualty in the long line of musicians who chose to burn out rather than fade away. Staley never achieved the iconic status of fellow grunge era frontmen Kurt Cobain and Eddie Vedder, but his versatile voice placed him in select company. Tortured by loss and consumed by addiction, he would go on to write some of the ’90s most memorable lyrics. Here are ten songs that defined Layne Staley, both as a singer and as a man.

One of Staley’s most gloomy offerings, “Nutshell” deals with a common theme found throughout his music: loneliness. In this brilliant Unplugged version, it sounds like he is weeping the words.

If I can’t be my own, I’d feel better dead

“River of Deceit” was the biggest hit from Staley’s side project, Mad Season. It’s a tragic story of self-destruction that mirrors his struggles with addiction.

My pain is self-chosen

I Stay Away
Alice in Chains

Staley displays his full range of vocal skills on “I Stay Away.” He starts low and guttural, then slowly builds toward a drawn-out chorus that emotes both pain and longing.

Your weakness builds me, so someday you’ll see

Sea of Sorrow
Alice in Chains

Staley channels his inner Ozzy Osbourne and belts out one of heavier tunes from Alice in Chains. He takes dead aim at someone who wronged him and blasts away without mercy.

A young, vibrant Staley pours his heart and soul into “Love, Hate, Love.” Obsession is a caged beast that cannot be tamed.

I live for you but I’m not alive

In perhaps Alice in Chains’ most beautiful song, Jerry Cantrell’s soft, melodic words give way to Staley’s agonizing wails. The dichotomy is its genius.

Scared to death no reason Why

Down in a Hole
Alice in Chains

“Down in a Hole” perfectly encapsulates Staley’s losing battle with drugs. He knew he was destroying himself, but was powerless to stop the downward spiral.

See my heart I decorate it like a grave

Man in the Box
Alice in Chains

The song that put Alice in Chains on the map also introduced the world to Staley’s unique voice. His ability to seamlessly switch between low an high octaves signaled he and the band were a force to be reckoned with.

I’m the dog who gets beat

Jerry Cantrell wrote this melancholy tale as a tribute to his father, a Vietnam vet. Staley’s impassioned and nuanced delivery helped transform it into Alice in Chains’ most complete and respected single.

Seems every path leads me to nowhere

Tragic, soulful, eerie and foreboding. “Wake Up” reads as an autobiographical intervention. Staley pleads to himself to wake up over and over. Sadly, he never did.

Slow suicide’s no way to go