Wanna know what’s really scary? To hell with murderous loons in masks wielding chainsaws and machetes, and screw those ethereal spirits… what’s really scary are possessed vehicles. Whether filled with demonic rage, or just at the mercy of overzealous and twisted drivers, killer cars and terrifying trucks are downright frightening! So here is a list of ten spooky vehicles that have sped nightmarish paths of destruction in movies. 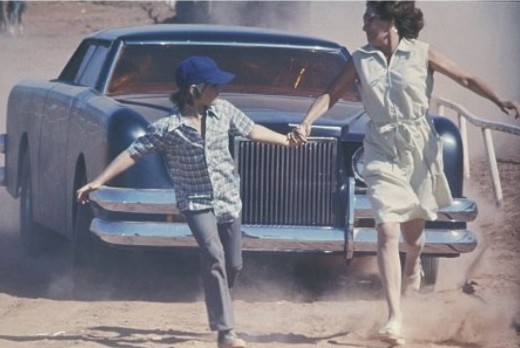 It would take more than the heroic exploits of James Brolin to save this 1977 cinematic turd, but it did, indeed, feature a killer and particularly freaky car. And as 'The Car', it terrorizes the small -and quite fictional- town of Santa Ynez, Utah, running over everyone and lowering the pedestrian population by a dozen or so. Yeah, it's bad, and yeah, the acting is about as fantastic as wooden puppetry, but it does remain a classic and has a cool horrific car to boot.

1971 Dodge Charger from ‘Wheels of Terror’ 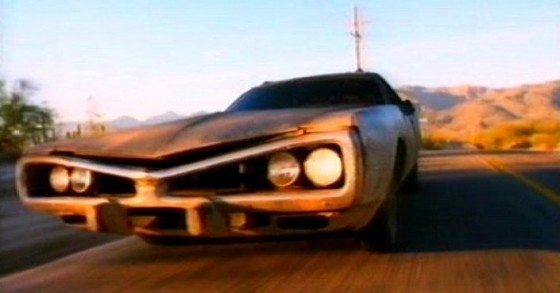 In this list, TV Movies count, too, because -as it turns out- so many were made featuring the exploits of brutal automobiles. This particular flick from 1990 (made for the USA Network) showcases a little more than just a killer car. In fact, the drive of said vehicle seems to be the one causing most of the horror, since he likes to kidnap and, presumably, rape women. Believe it or not, the actress who plays one of the victims (Marcie Leeds) was nominated for a Young Artist Award for Best Young Actress in a Cable Special.

The GMC Truck from ‘Bereavement’ 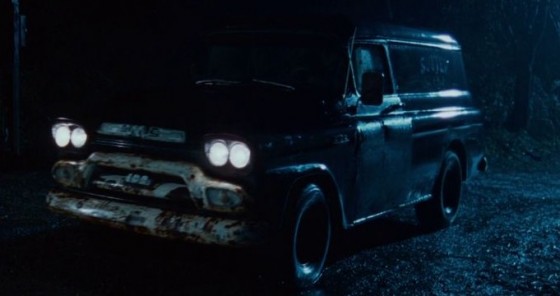 I was unable to find what specific model of truck Sutter drove in 'Bereavement', but if you haven't seen the movie, check it out and you'll quickly understand why this GMC Slaughterhouse Truck was such a malevolent piece of machinery. From the first scene when it creeps past a boy walking home from school, to it's continued use in gathering victims, just the growl and the shots of the front grille are enough to spark a little twinge of fear. The movie isn't too bad, especially if you want to see Alexandra Daddario in tiny tank top... just prepare yourself for a bizarre ending. 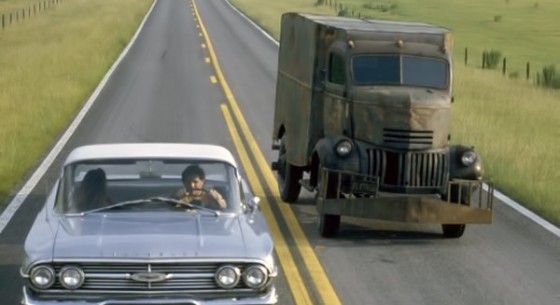 With a name like 'Jeepers Creepers' it was a real crap shoot what you were going to get with this movie. But it turned out to be a big surprise with a really creepy 'demon' and one hell of a menacing automobile. From the first scene where Trish and Darry are driving down a long, desolate stretch of highway and we see that hulking truck come screaming up at them, well, that was a great sign that we were in for a pretty fun ride. A gruesome ride, but a fun ride. 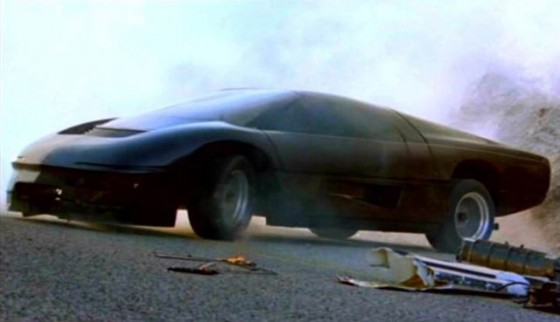 In 1986 a film by the name of 'Wraith' was released featuring yet another killer car and its completely clad driver, whose identity is a mystery. In this movie, a gang of car thieves is wreaking havoc on a small town and forcing victims into ridiculous road races. But soon a mysterious car arrives into town, the titular Wraith, and its driver who begins systematically destroying the gang. Though there is a twist in this all-too-dull gem, involving Charlie Sheen no less, the movie is head-scratchingly stupid and is only saved by the cool car. 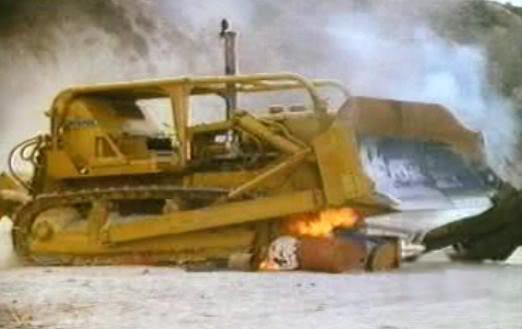 As silly as this 1974 made-for-TV flick was -and it was- it was still all kinds of kick ass. How could you not love a rampaging, possessed bulldozer? There is literally no way! As it is with most monstrous things in movies, the Killdozer was born of a meteor that crashed to earth onto a small island off the coast of Africa. Eventually, the entity that was trapped in the space rock turns the innocuous machine into a malevolent killer. Of course it did! But trust me when I tell you: you will never forget this movie. 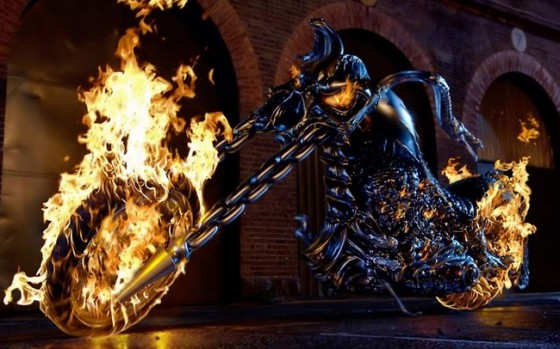 It doesn't matter what make or model The Spirit of Vengeance's motorcycle is, just the simple fact that you have attracted the attention of a flame-wheeled, burning bike is bad enough. And that's not even the worst of it. The Rider (John Blaze or Dan Ketch) is a demon with a fiery skull and a deadly chain that can turn you to cinders. His bike obeys his commands and is almost as horrific as Ghost Rider himself. According to some lore, he can convert whatever vehicle he happens to be driving or piloting into an agent of hell, as witnessed in the second movie. Now that's scary. 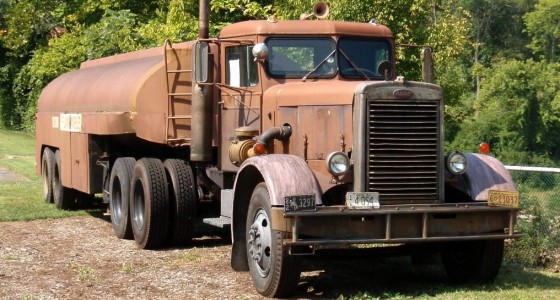 One of Stephen Spielberg's first movies finds Dennis Weaver (as David Mann) as the target of a mellifluous semi fuel truck. The story was written by Richard Matheson and features the persistent tormenting of a business man who is traveling across California via a two-lane desert highway. In a series of near misses, the driver attempts to kill David at every opportunity, including trying to get him into a collision with oncoming traffic. The chase continues in and out of gas station and diner stops, and eventually comes to a head at the edge of a cliff. One of the scariest chase movies this write has ever seen. 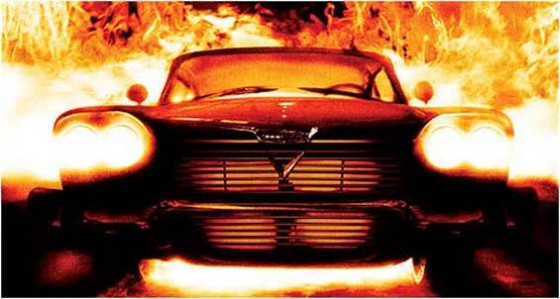 It takes a master of horror fiction to pen a truly terrifying tale about a possessed car in its murderous path of destruction. In 1983's 'Christine', Stephen King takes an otherwise innocent Plymouth Fury and tags it with his trademark brand of gory destruction, thanks in part to director John Carpenter. Arnie Cunningham buys the beaten up 'Christine' (a name he gives her) and spends every waking hour outside of school fixing her up. In the mean time, he begins to change into an evil shell of his former self. Soon, all hell breaks loose and 'Christine' wreaks her own brand of havoc.

The Green Goblin Semi From ‘Trucks’

Yet another in the King's repertoire, only this time King was admittedly coked out of his skull during the making of his 'Trucks'-inspired 'Maximum Overdrive'. The plot goes that the Earth passes through the tail of a comet (haven't I heard this before in zombie flicks?) and previously inanimate objects begin taking on lives of their own. Soon, at a Dixie Boy filling station, the humans attempt to make a stand but are ultimately enslaved by the machines who promise, via Morse Code, not to kill them if they cooperate and refill the long lines of semis and machines waiting at the pumps. And yes, the leader of the machines seems to be Green Goblin.