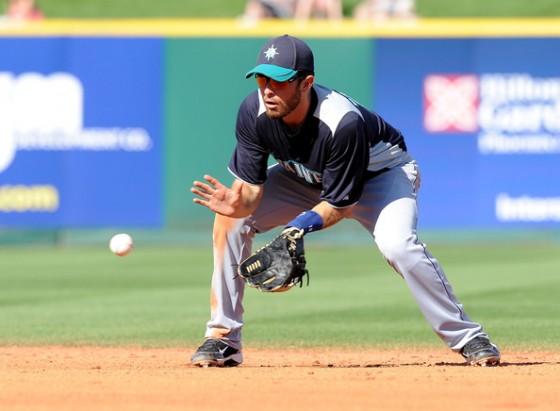 Dustin Ackley has given the Mariners' offense a huge boost

Prospects are one of the most exciting aspects of baseball. What the MLB draft lacks in immediate excitement is more than compensated for two years later when the top prospects become major league ready, providing a burst of enthusiasm and a new iconic player for fans to cheer for. The dog days of summer can make or break a team. Players start underperforming, and teams usually have two options; make a trade to bring in a quality replacement or rack the farm system for a potential starter and, if they’re lucky, a future star. Some guys take time to mature into a consistent player, but some hit the ground running and don’t look back after their first appearance. These are ten guys that have been called up to the majors this summer for the first time in their careers, and have been a pleasant surprise for their respective teams. Players are ranked in order of deemed impact.

The only bright spot for the Dodgers faithful this season has been Matt Kemp’s and Clayton Kershaw’s MVP and Cy Young candidacy. Gordon has provided a big spark to the Dodgers lineup. In 35 games he has 15 stolen bases, although he has yet to homer and has a paltry two walks in 132 at-bats. Nonetheless, anyone that can steal a base every other game is an asset to a team that needs to move runners to score.

Felix Hernandez once again inherited one of the least productive offenses in the majors, this time with a poor-hitting Ichiro Suzuki. We’ll get to a bigger impact player for the Mariners later on, but Robinson has held his own through  23 big league games. Despite striking out in over a third of his at-bats, he’s posted a respectable .321 on-base percentage and has hit an astounding ten doubles thus far in his tenure with Seattle.

After trading Zack Greinke, the Royals were expected to be the whipping boy of the American League. A strong batting order has seen to that matter, as the Royals are, albeit barely, only the third worst team in the AL. Giavotella was a late August call-up, and has since overtaken Chris Getz as the starting second baseman. His number aren’t outstanding, but he does have two home runs in 30 games. Getz has zero in 113 games.

After trading Doug Fister to the Tigers, the Mariners were left without a decent number three option in the rotation. Beavan has been solid, posting a 4.33 ERA and a 1.30 WHIP, and his 3-5 record is nothing to be ashamed of playing behind the Mariners horrid lineup. He should emerge as a reliable pitcher in the latter part of the rotation in 2012.

Trout entered the season as the number two minor league prospect in baseball, behind Bryce Harper. He was called up by the Angels in July at the ripe age of 19, and struggled starting off. He was demoted to the minors, then recalled again. Trout proceeded to go on a tear, hitting three homers in a two game span. The scary part is he’s only been sent to steal once, as his speed is just as respected by scouts as his hitting.

Yet another second baseman from Arizona State, Kipnis showed power that was impressive not only for his position but his youth as well. He homered in four straight games and in six of ten games overall. He’s currently sitting on the DL, but the Indians offense should be in good shape with a healthy Kipnis to start off 2012.

Goldschmidt led the minors this year in home runs, so the Diamondbacks decided it was a good time to see if he was really a major league-caliber slugger. He responded in a similar fashion to his minor league prowess, hitting six home runs before reaching 100 at-bats. With Arizona all but a lock for the playoffs, Goldschmidt will be a key component of the D-backs lineup in the postseason.

The brother of Brewers second baseman Rickie Weeks, Jemile has shown to be just as productive early on. Though he doesn’t contain the same amount of power as his brother, his speed and contact have proven vital as the lead off man in the A’s lineup. He’s maintained a batting average of nearly .300 through 78 games played.

Prior to his debut, Ackley was known as the guy who was drafted after Stephen Strasburg. Now he has scouts and fans alike wondering if he should have gone number one in that draft. None of the players have been more important to their offense’s production than Ackley. He’s batting .302 with six home runs and an astounding 34 RBIs, given the Mariners general lack of base runners.

The word epic is thrown around way too often, but Lawrie’s performance against the Red Sox on Monday was nothing short of it. The 21-year old third baseman hit a walk-off home run in the bottom of the eleventh inning in a 0-0 game to give the Blue Jays the 1-0 victory. In 30 games he’s homered 8 times and driven in 21 runs, and has stolen five bases to top it off. If it weren’t for Jose Bautista, the Blue Jays’ offense would be just as terrible as the Mariners’, so Lawrie’s slugfest is nothing short of Ackley’s.